Welcome to our third in a series of posts covering the first eleven issues of "The Card Collector", Woody Gelman's sorta-catalog-sorta-not newsletter of the late 50's and early 60's. Things were really picking up in the hobby in mid-1960 and TCC was all over it.

Right off the bat, the Card Collectors Co. Checklist Book is discussed.  It was hinted at in previous issues but was by now a reality. 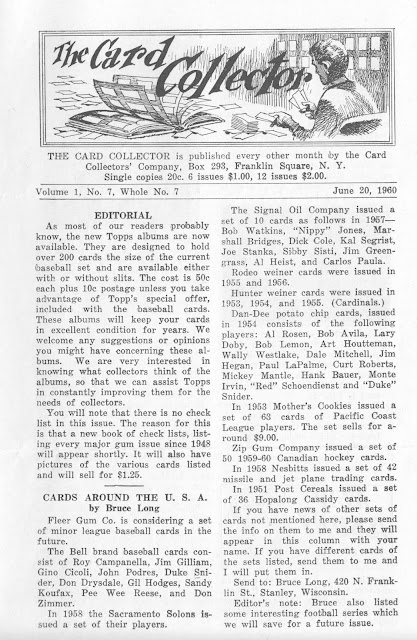 The Topps album being described was this bad boy, which was state of the art for the times: 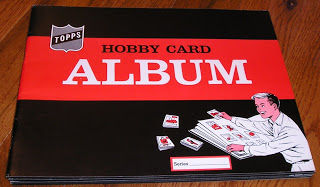 Here now, is a very, very interesting Card Chatter. It says that seven copies each of the three famous 1960 "proof" errors made it into circulation.  You might need a salt shaker but given how rare these cards are, I guess it's possible.  It's funny what contemporary accounts can provide. There's also an article on the large cards issued by Post Cereal in 1960 and a blurb on the 1960 Fleer All Time Greats cards. 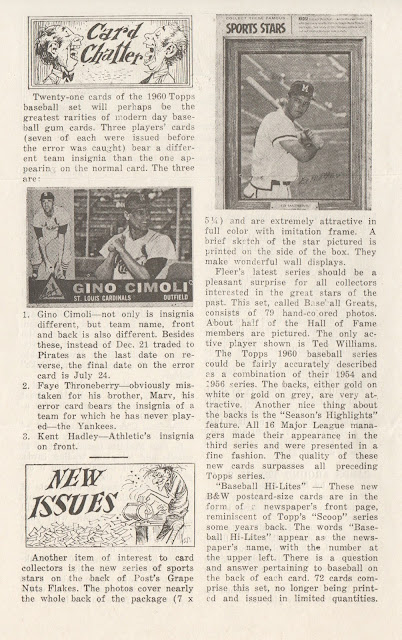 Bazooka gets a blast as well and also the first series of 1960 Leaf Baseball.  I'm not sure how many adult collectors would have known about such things if not for these puff pieces: 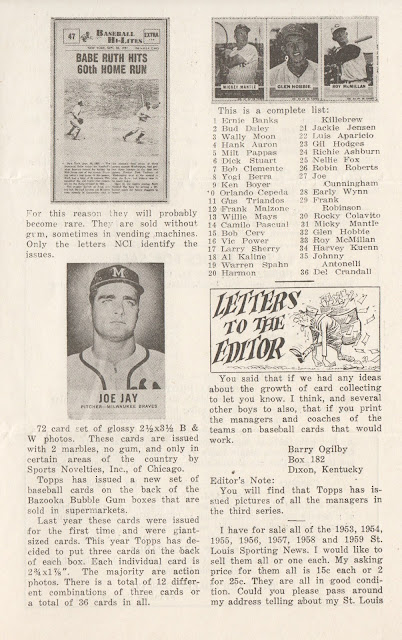 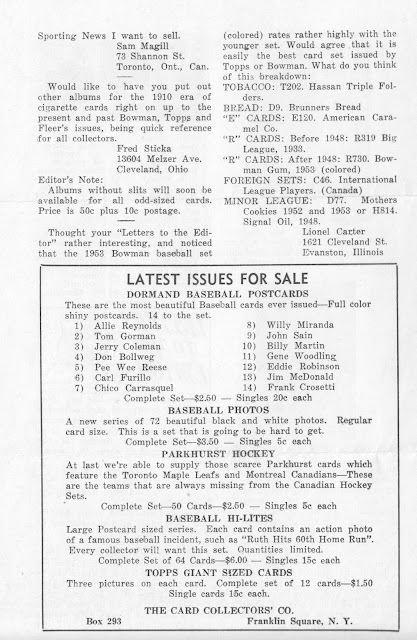 This was the last of the four page issues; it would be eight pages (amid a plea from the editor) going forward: 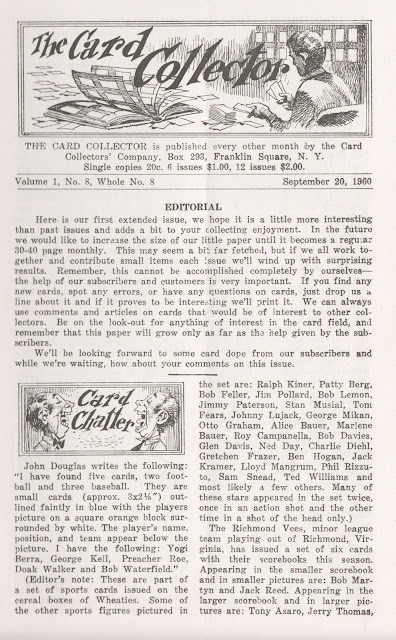 Gotta hand it to Woody, he would reference competitor's to Topps: 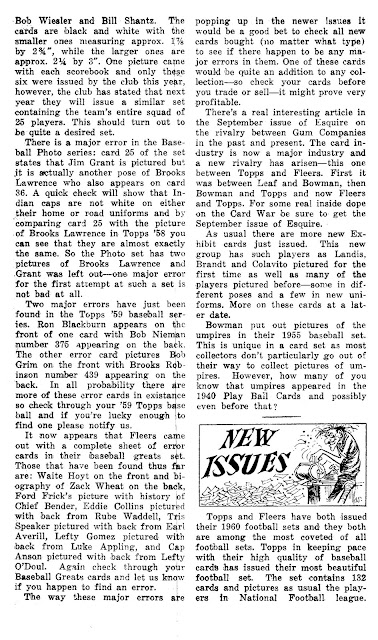 Things get a little reflective with a discussion of the 1960 Metallic Football Emblems inserts but then matter get downright funky with White Sox tickets! 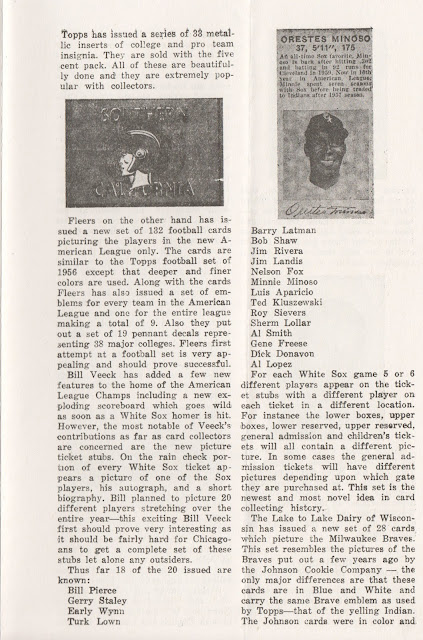 Non-sports and Canadian cards are mentioned. Surprisingly, Parkhurst gets props while Topps partner O-Pee-Chee is frozen out: 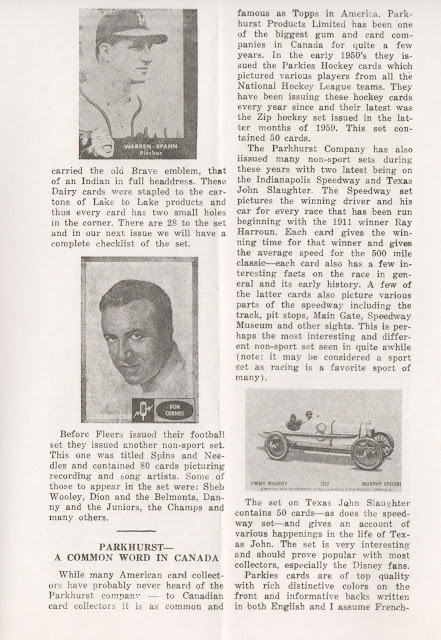 Early on Woody promised articles on Exhibits.  He made good: 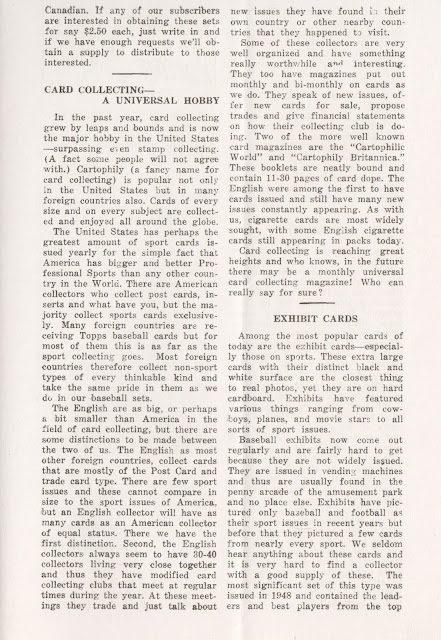 Programs, get your programs.... 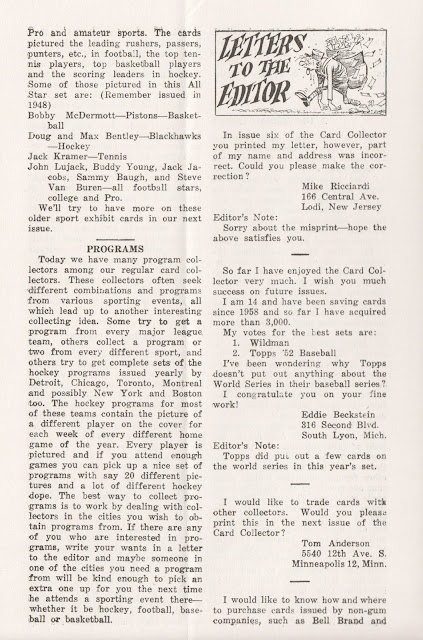 If rare regionals or checklists were your thing, TCC was the place for you: 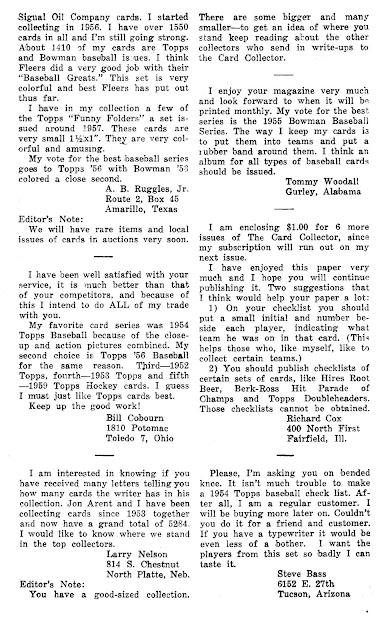 And now, a bit of a showstopper.  I had no idea Card Collctors Company sold uncut sheets of cards, or in this case panels.  Makes you wonder where those rare variations came from that were discussed in issue 7...... 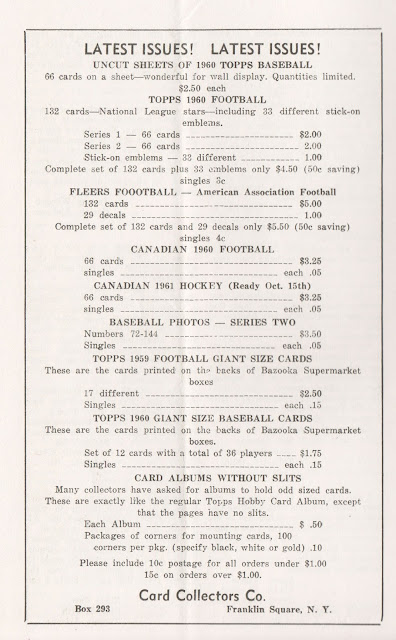 OK, I have to stop now, I'm giving myself the vapors!

I've got to read this in further detail later. I have a complete set of the Parkhurst Indy cards and am always looking to acquire more and put more sets together. I've never seen anything written on them and appreciate this, even if it isn't a ton!

This is one of the only references I've seen to the 1960 Parkhurst Indianapolis Speedway Winners/Hawes Wax Indy/V338-2 set. There's just not much info out there on them. Thanks for sharing!

If you like the really old race cars, this is a great site: http://www.vanderbiltcupraces.com/

I've definitely referenced that site, as many of the cards in the T36 set reference the Vanderbilt Cup.