The New York City Municipal Archives recently made available their trove of their 1939-41 tax photos (over 900,000 in all) and let me tell you, it is like traveling back in a time machine.  Upon seeing the announcement I immediately set to investigating several address associated with the American Leaf Tobacco Company (1908-38) and American Gas Stations (1928-39), which as all of  my intrepid readers undoubtedly recall, were the two Shorin family businesses that were closed and sold, respectively, as they were launching Topps Chewing Gum in December 1938.

The two addresses associated with the American Leaf Tobacco Company (ALTC)  that I have found, both in Brooklyn like all other Shorin family ventures of the time, were located at 140 Throop Avenue and 7 Debevoise St.  I started with the aboriginal address at 140 Throop Ave and found....nothing.  It was clear the original building had been either knocked down or so modified as to be useless to me.

So I crossed my fingers and went hunting for 7 Debevoise St., hoping I could at last find an image of the name or company logo but alas, it looks like the tax photo was taken just after ALTC would have vacated.  7 Debevoise St is the building in the middle: 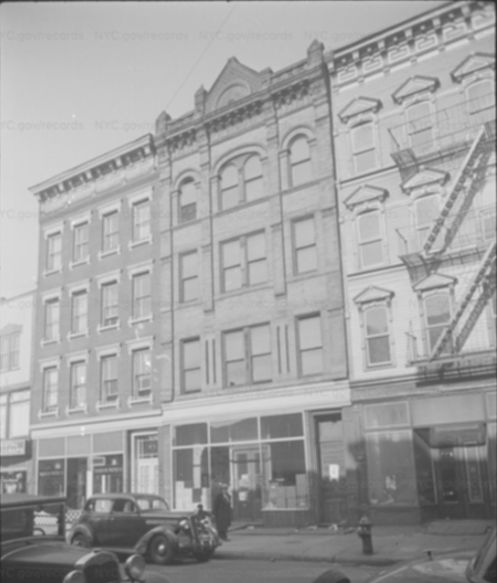 Zooming in shows what looks like the succeeding business moving in-you can see the boxes piled up in the window: 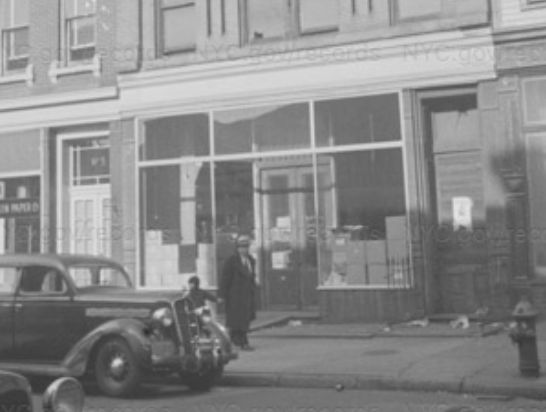 The detail is pretty remarkable on these pictures-although the official image of #7 was at the end of a film roll and not usable but the one I found was for the address next door, which gives a perfectly fine view of the building I previously showed on a circa 1905 Brooklyn Eagle postcard. You can easily identify #7 to the left, although it had what I gather were lightning rods atop it then: 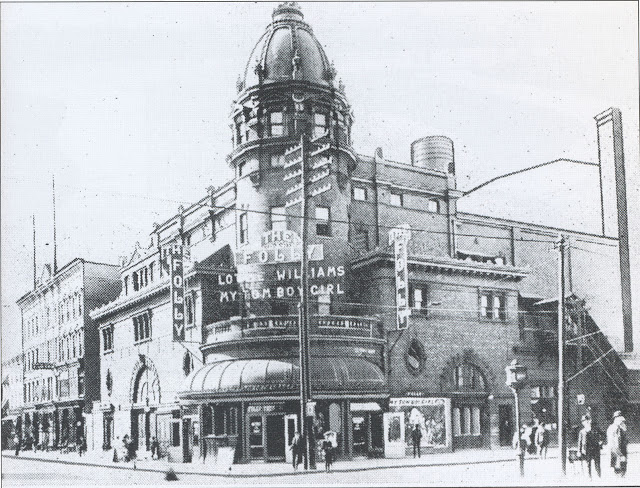 Undaunted I next turned my attention to American Gas Stations (AGS), which is a better documented company than ALTC both on the web and in my own collection of Topps ephemera (I have zero on ALTC, not even a matchbook cover, and have never seen anything at all associated with the company).  The AGS HQ and main location was at 1619 Bedford Avenue, which was a block north of Ebbets Field.  Here's a view of the fabled ballpark you rarely see: 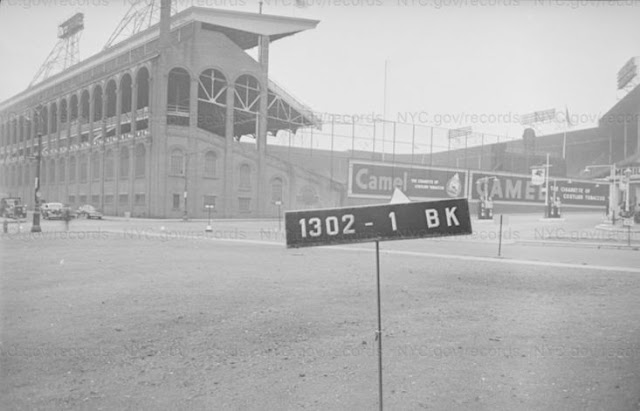 A caveat: the sliver of gas station shown to the right (this view is from Sullivan Place) is probably not the AGS HQ. The block and lot numbers don't quite match up in some locations on the tax photo database and search pages to current day coordinates but I'm pretty sure this was actually a Sobol Brothers operation with AGS up Bedford Avenue (running in the direction of the Camel sign from right field to center) about a block from here. The address of Ebbets Field was 55 Sullivan Place, which may explain this picture (can't tell, it's garbled on the locator site) and it's such a neat shot I wanted to show it to add some flavor.

I can definitely ID this next shot at 1381 Atlantic Avenue (Brooklyn Avenue at the corner of  Atlantic Avenue) as an AGS location, although it had been sold by then to Socony (who bought out AGS in 1939). 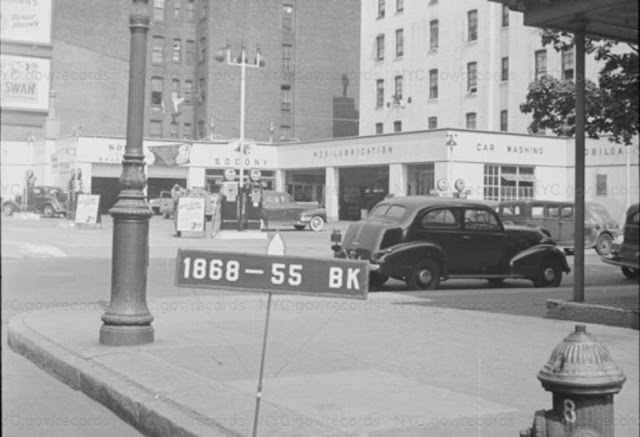 I was a little disappointed not to find an actual American Gas station but I persevered and found this spectacular shot finally, from 547 Vanderbilt Avenue (at the corner of Pacific Avenue): 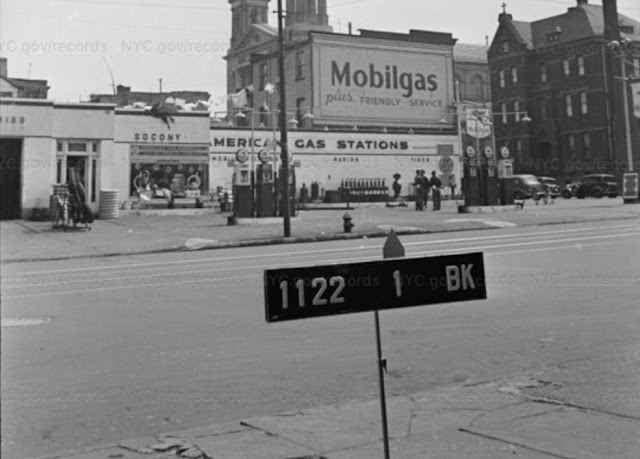 AGS sold Socony (Standard Oil of NY) products, which were usually branded as Mobil, so that's why you see the name on this shot, which must slightly predate the other one, but this is the quarry I was after.  Check out the three attendants, all in their spiffy uniforms, standing near the pumps!

I plan to keep digging through the tax photos to see what pops up.  The search functions are a little off kilter sometimes and more than a few addresses seem to be missing but it's 95% accurate from what I'm seeing and you can suss out some more of it yourself after you poke around and get the lay of the land. Find out how to navigate the photos yourself by going here.

All the buildings above are gone, although several AGS locations remain as gas station sites.  The zoning laws in New York City probably have something to do with that but I think the last extant AGS structure at 1815 Ocean Avenue was torn down around 2012 and replaced or updated with a more modern building (a Sunoco) which now in turn looks to have been quickly eradicated for an apartment building expansion. Progress...