I've covered Bowman's Blony Bubble Gum before in these parts, mostly focusing on the multi-year Archie Comics that inner-wrapped their (by-then-Topps) gum in the late 50's, but today I'm pleased to showcase a number of their earlier comics thanks to a wealth of scans recently provided by BFF o'the Archive Jeff Shepherd.

Blony was originally marketed for the better part of the decade preceding World War 2 and was manufactured by Warren Bowman's aboriginal confectionery company Gum Inc.  He mostly or completely suspended production during the war and got things going again with the brand around 1947, at which time he had already turned his concern into Bowman Gum, Inc with a mid-war rebranding four years prior.  Blony was a big seller and had presumably included some rudimentary inner wraps with their penny tabs and/or twists prior to the war, although like many things associated with the brand, they remain hard to document. This was from a retail box end and it gives you an idea of how things were pasted up for Blony around 1952-53: 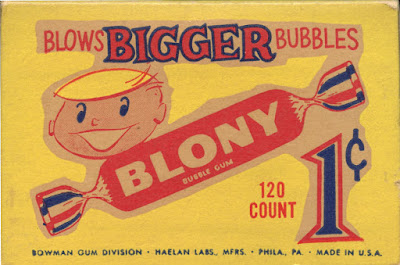 So Shep sent me scans of several dozen Blony "comics" that look to fall into the period between 1947 and the purchase of Bowman by Topps in 1956.  These are, by and large, inferior to what Bazooka was giving the kiddies as you will see.

These appear to be the earliest example in the group, which is pretty obvious given the graphics and (very helpful) numbering scheme.  I think this was from a twist wrap: 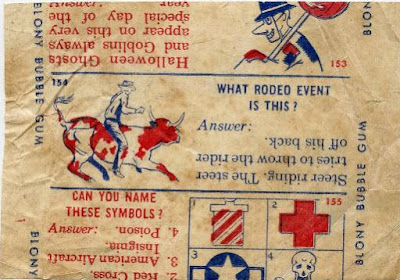 Pretty boring, I'd wager sure the kiddies didn't think much of the quiz format.  Here's a couple from a little later, check out how lame the 3rd question is on the Hidden Metals quiz in the second example: 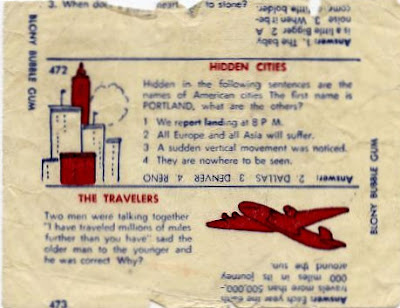 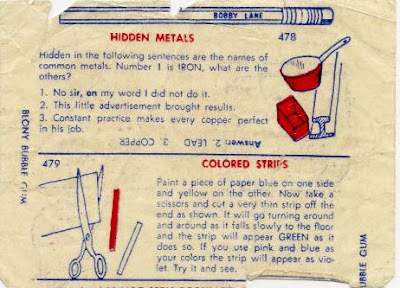 The Wild West was a big theme but man, the production values are pretty much sub-par. Still, this seems to be where more than one spot color was introduced: 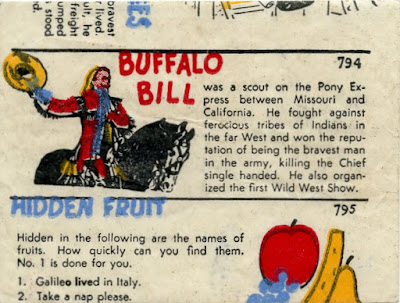 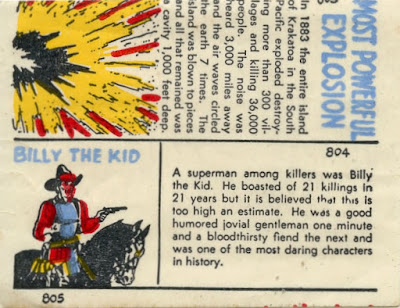 Looks like the color bleed problem went away as the series progressed.  I seem to recall Bowman offering wrapper premiums previously but don't seem to have a scan of anything offering same. 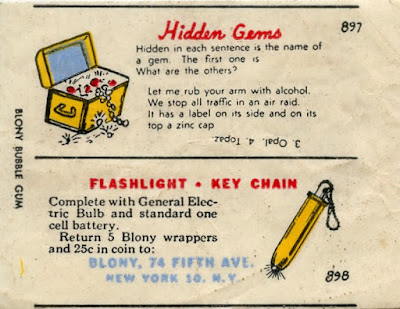 In the below example, an older, larger example appears on the right but it's the insert on the left I'm looking at.  It's a bit of a reversion color-wise, so maybe these were produced independently to a degree but I really don't know. Note the Cincinnati address, just like Topps different locales provided premium redemptions:

Furthering the "independently produced" theory, the pencils from the above left make a reappearance: 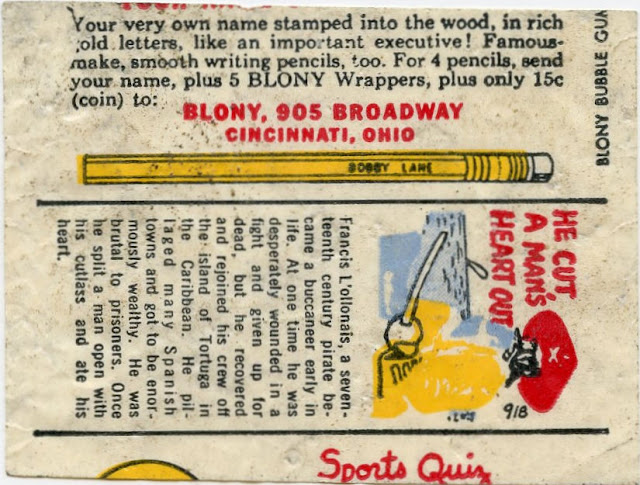 None of these are scaled, so who knows how things actually went down but maybe twists had one style and tabs the other.

Pretty gruesome, just the thing for the kids who were voraciously lapping up EC Comics and such!

It's plain, to me at least, that Bazooka featured much better comics and premiums but I doubt that had anything much to do with sales.  Besides, Bowman also was able to offer this in Blony's stead: 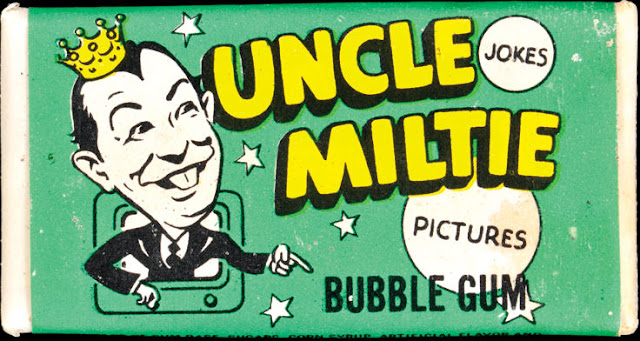 Thanks to an opened wrapper over at Tick Tock Toys, we can get a peek at some indicia: 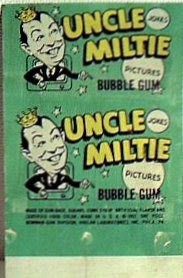 Hard to see but Haelan Laboratories are detailed and that became a business entity as of April 28, 1952 so Uncle Miltie was issued after that date. I suspect 1952 was indeed the year of issue as the Milton Berle Show (really Texaco Star Theatre) was peaking that year, with an average rating around 50%!

Now, all I need is a scan of the inside of that wrapper!