So six or seven years ago, when I was researching sets for my book, I realized that Topps had done something strange with the 1955 Hocus Focus set. It was long thought the "small" (7/8" x 1 7/16") version of this set came out that year, with the "large" (1" x 1 9/16") version issued in 1956, but Topps in fact issued both versions in 1955.  This was because the small cards came in penny tabs while the large cards came in nickel packs and were panelized, six at a clip. The reason for this double sizing remains unknown but I suspect the penny packs were a test issue of some sort, probably to see if the style of packaging was still viable (it wasn't).

Here is the evidence for both sets being a 1955 issue, one Johnny Schmitz in small: 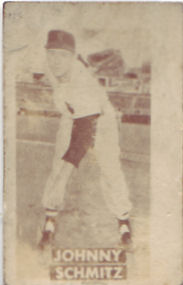 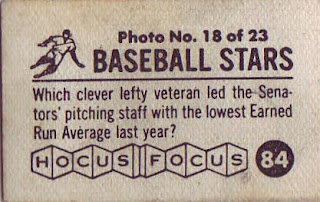 And large.  Note the subset numbering reduction to 18 from 23 and the dotted lines on the long edges, which matched light scoring on the front to allow for breaking the panels into individual cards, the latter a sure sign of the larger version (at least one long edge of a 56 will have these lines): 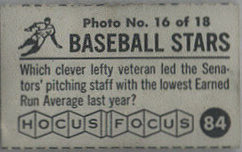 So we have the same text and overall number for both, which is how the sets are configured through #96.  Schmitz actually led the Senators in staff ERA in both 1954 and 1955 (the latter was about a run higher than his stellar 2.91 mark in 54) and after I guessed they were referring to his stellar 1954 season I had found another reference on the Hal Smith card to an event in 1955 that sealed it: 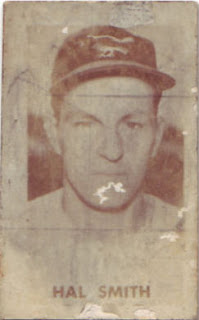 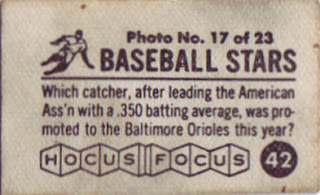 Smith made his major league debut on April 11, 1955 (which dates the set after that event) and was actually NOT the top batter in the American Association that year - Johnny Bucha of the St. Paul Saints was two points higher at .352 but with only 278 Plate Appearances vs Smith's .350 with 413 PA's - but close enough.

Woody Gelman himself got the date AND set name wrong in a Card Collectors Co, catalog from ad from April 20, 1962: 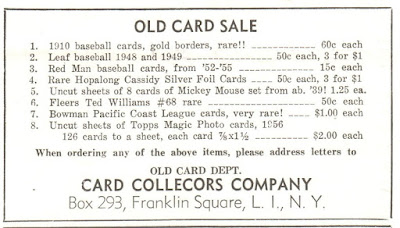 That two bucks for a full uncut sheet of the small cards would have been quite the investment 57 years ago!  As Woody got the name of his own company wrong as well, we can assume typos occurred with some frequency.

While the sets shared main sequence numbering up to #96, there were 30 additional cards issued in the smaller format concluding with #126. These 30 subjects also feature a disruption in the numbering of five of the eight subsets accordingly.  At the time my book was published (July 2013) 17 of the subjects above #96 remained unknown. This extraordinary paucity of checklisted subjects among the "super high" numbers is unprecedented-there are simply no other Topps card sets with unknown subjects, although a few 40's and 50's Tatoo sets are similarly under-developed as you might imagine. Most intriguingly, another penny issue from 1955, Davy Crockett Tatoo is even rarer than Hocus Focus with only a handful of examples presently known.

In the years since, the list of unknowns has been whittled down to a mere six. That number was eleven until very recently when Brian Wentz of BMW Sportscards sent along scans of three heretofore unknown subjects and Friend o'the Archive Bill O. pointed me to scans of two others. 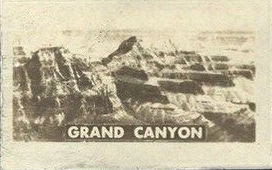 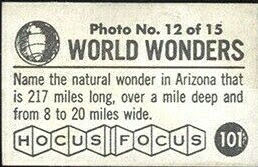 Kind of hard to see the grandeur in that tiny little picture!

Another airplane has come along now as well: 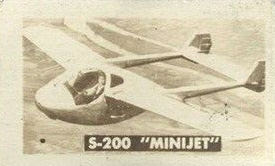 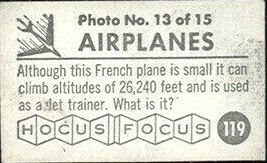 That's a little better-you can even see the pilot in the cockpit.

Finally, we have some cycling action-this guy looks pretty excited: 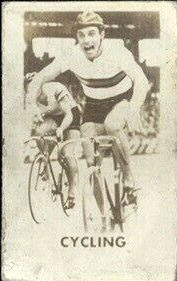 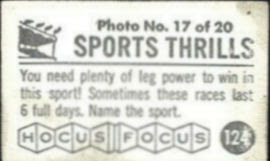 These new subjects from BMW were found within a larger grouping of twelve of the small cards.  As I have previously noted the ratio of small to large cards seems to be about 1:40 (I may be tweaking that a little downward as I do more research but it still seems about right) so this is no small thing. 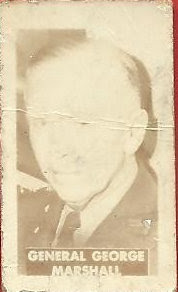 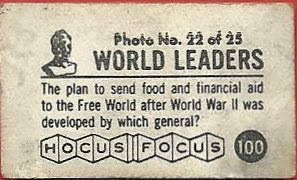 No. 110 is quite blurry as it's from a small original scan, subset number is still TBD-this is one elusive subject as previously I knew it by number only.  Slowly it reveals its secrets, this Douglas K-3

The numbers still lacking confirmation of their existence are: 97, 98, 108, 111, 120 & 125 with #110 being a known number now but needing some sharper focus and another subject being Lou Gehrig, number presently unknown as no back scans can be found.  I do have an old Sports Collectors Digest picture of Larrupin' Lou's obverse though, from a Scott Brockelman find around 2003: 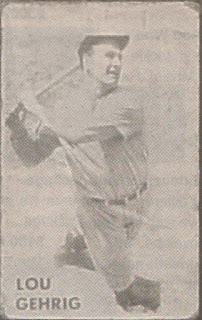 Sixty four years in and we still don't have 'em all nailed down!