One of my current projects is determining Bazooka packaging from 1947-56 as I slow roll the second edition of my book to the early years of Topps. Actually, I'm looking past that period as well as there are a number of box back sets issued in the 60's and early 70's that are not sufficiently documented in the hobby so I guess this is all part of one bigger quest.

Early (pre-1957) display packaging from Topps is very hard to find for the most part., with a couple of exceptions.  It's easier to find vending and cello packaging and display items as they were often generic in appearance and also seem to have been supplied to early hobby dealers such as Card Collectors Company.  Not a whole lot exists beyond wrappers and the occasional gum canister or counter display box and both can give us clues on dating.  A 1955 Bazooka 80 count box recently was up on eBay and it's worth a look I think, as it somewhat defies the norm.

It's a very basic box: 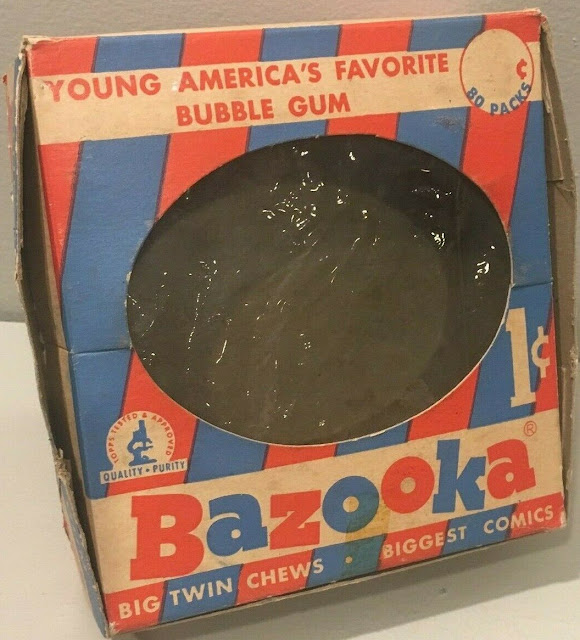 The cello window is interesting as it implies a need to keep the gum protected yet viewable. This seems like it was meant for either supermarkets or variety stores given the pricing circle implies you should be buying the whole shebang at once.  The Quality & Purity logo is something I am tracking, as it seems to have commenced being shown around 1949.  It even appears on an early paper Bazooka test wrapper,  possibly from '49 as well since prior to the summer of that year Bazooka was strictly sold in nickel form but the indicia is illegible on this scan, alas!

It's also possible it's from a later year but they style certainly suggests late 40's:

"The Atom" was used through mid-1958 so I would like to cipher when the Quality & Purity logo was discontinued to further narrow down the time frame for this and certain other issues.

As an aside, on the middle of the time spectrum were issues such as this, from a set I am pretty sure is not fully checklisted: 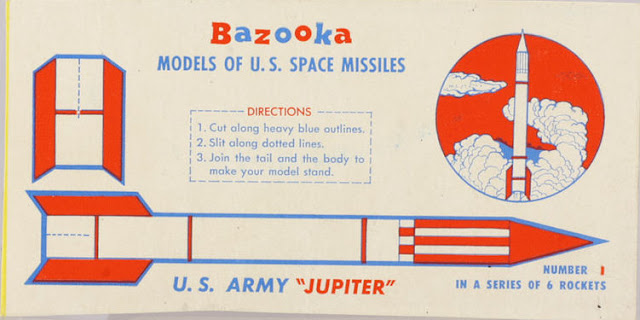 That missile was produced from 1956-61 so if the box front could be found, it would be nice to see what little logo might appear on it.  That scan and the one above comes from BFF o'the Archive Jeff Shepherd by the way.

More from our 1955 box, to show how things looked: 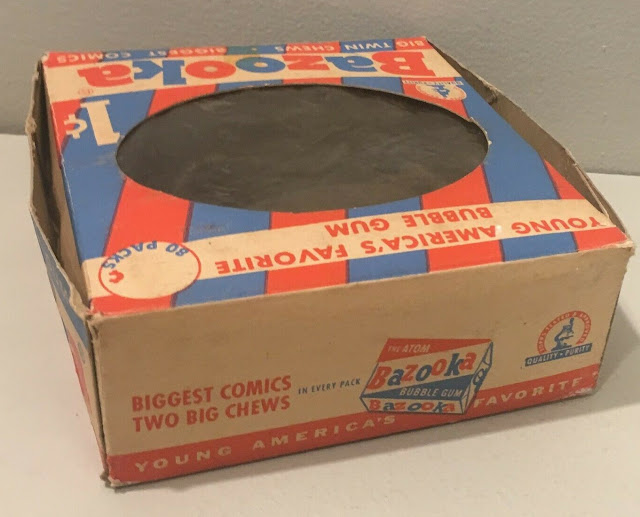 More slogans above and, crucially, a date on the bottom: 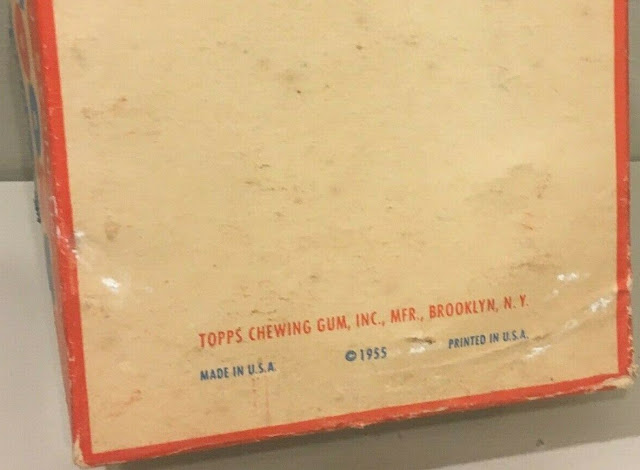 If anyone has Bazooka box scans from 1947 into the mid 70's, I am happy to accept them.  Likewise the old Topps sales catalogs, which are another elusive thing that is unbeatable for dating and identifying products.  I think they issued three or four different catalogs each year and I only have scans of a scant few.  The more the merrier!

Great article! I agree on nearly every aspect of this information you have written. You have great insight on this topic. Thank you for making this so clear and understandable. Counter Display Boxes