As a follow up to my recent post on the the 1968 Topps 3-D Baseball set Friend o'the Archive Keith Olbermann has kindly sent along a slate of scans that will help illustrate the variants on several cards but before we gt to what are the less obvious variations represented by these images let's look at the two easiest to identify..

These two most well known variations are on the Maloney and Fairly cards, the infamous Dugout/No Dugout versions.  These are easy to spot: 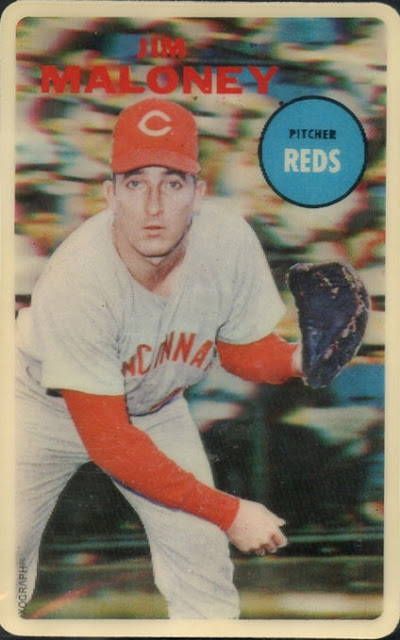 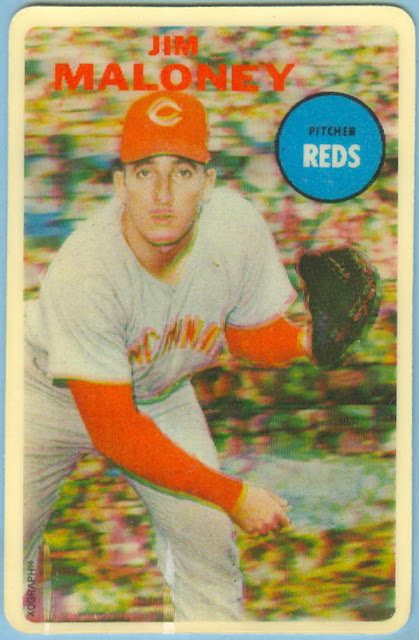 Why the dugout was obscured, I do not know but it's fugly, innit? Maloney is also slightly oriented leftward in the bottom example compared to the top one.  Here's Fairly: 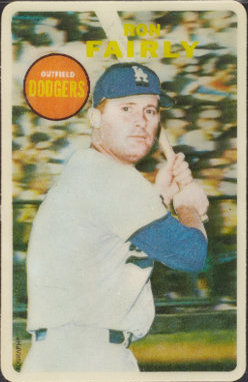 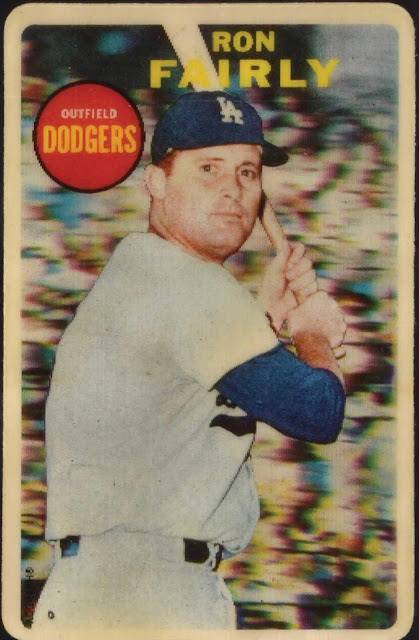 The Dugout Fairly looks to use a very similar background to Maloney's, they almost look like the same shot. The No Dugout Fairly though is much neater, there is no amorphous blob at field level like the one showing on Maloney but they added one at upper right, obliterating the fan with glasses sitting in the stands.. His cap is also a smidge closer to his name on the bottom card. I'm not sure which version is tougher, pop reports don't really make an effort to distinguish these.

Now the five other variations are more difficult to spot.  Willie Davis is the easiest, note there is no black around the red circle on one example vs. nothing on the other (all scans below except where indicated came from Mr, Olbermann): 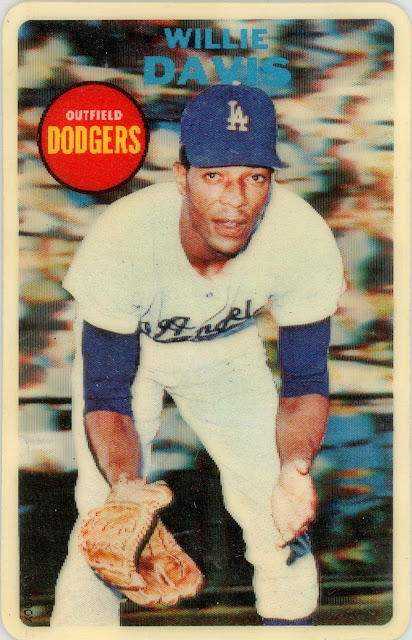 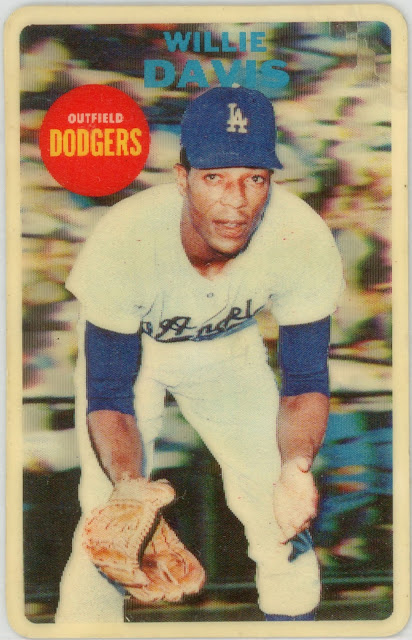 There is some thought that the bottom Davis just exhibits a printing error.  I'm not 100% sure about that as the black process is clearly abundant on the card; however lack of Xograph indicia does seem to indicate it could be a proof and if so, the black circle and production indicia were added atop everything else at the end, just before the coating was applied. There may be a slight change in projection as well in the background, although it's miniscule. It's hard to tell sometimes with these shape shifters! I lean toward unissued proof on this one, although it is not treated like the other known proofs in the set (Tommy Davis, the two O'Donoghue poses and Rick Monday).

Flood is a bit more difficult.  See if you can spot the difference: 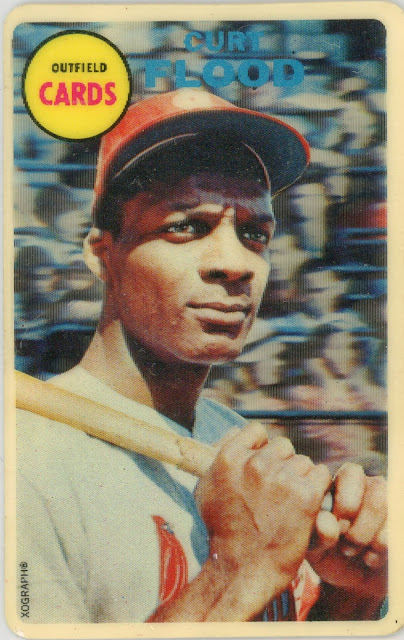 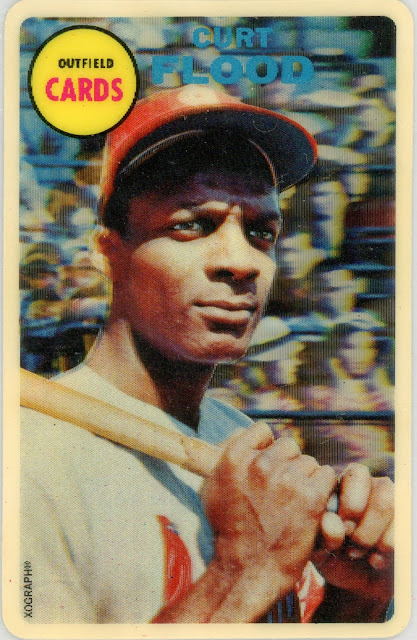 Spot it?  Look to the left of his right ear-there is a distinct black and white cast to the fans appearing just under the blue railing.  They are much more colorful in the bottom example.

The Powell is trickier still; it's also one of the tougher 3-D cards to find which doesn't help with the variations being well publicized: 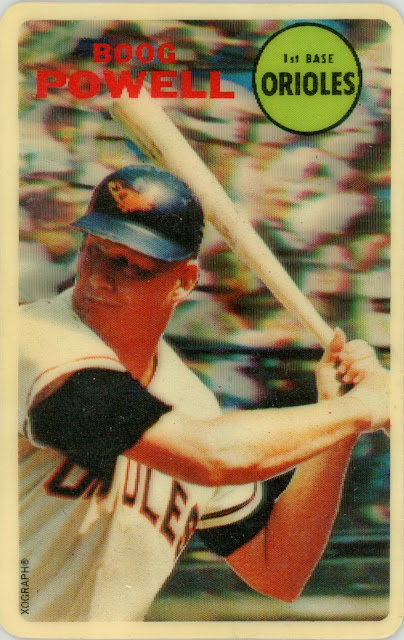 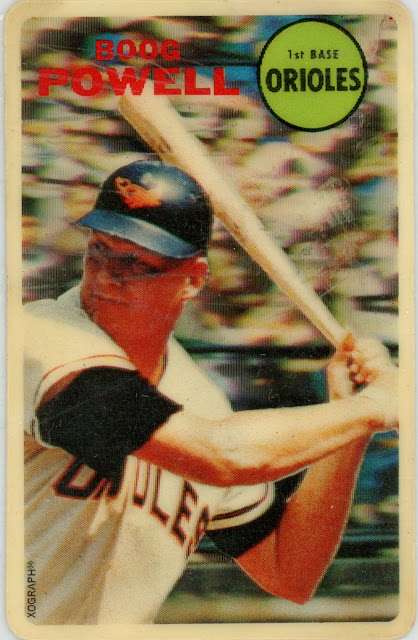 Once again, camera left shows some slight differences next to his helmet.  In addition the bottom Powell is oriented slightly down and to the right-check out the amount of railing to the right of his top hand in both and also the amount of bat handle showing under his bottom hand.

The Staub is tricky too: 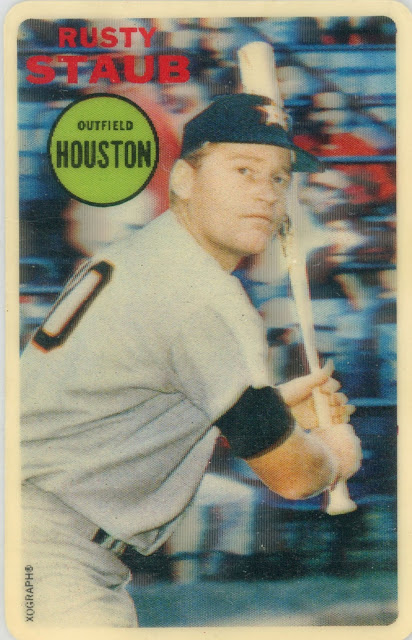 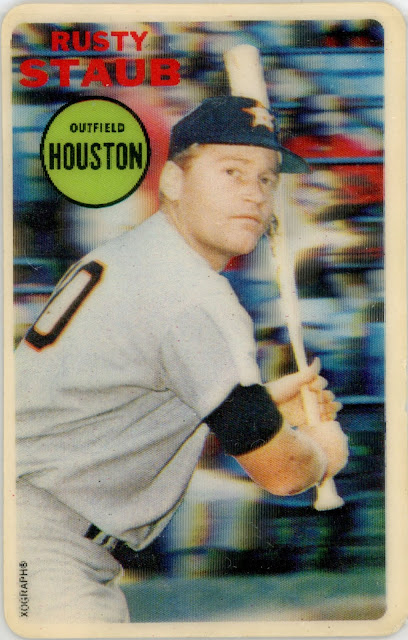 There is an ever-so-small difference in the cropping of the player's legs under Staub's right arm.  The entire bottom background is also shifted right a little-there is no room for the full blue dot in the extreme upper right corner of the bottom card. Per Mr. O, the variations are easier to spot on Rusty and most of the others with the cards actually in hand.

As an aside, Rusty was one of my favorite players and I used to dine at his Fifth Avenue restaurant in Manhattan quite a bit back in the 90's.  He would swing by the tables and see how things were doing if he was around. He had two other Manhattan joints at the time, one a BBQ place and one more of a pub.  His Fifth Avenue location served upscale BBQ essentially and had quite the wine list.

The last variation concerns Tony Perez. The top example comes from KO, the bottom one is is "source unknown": 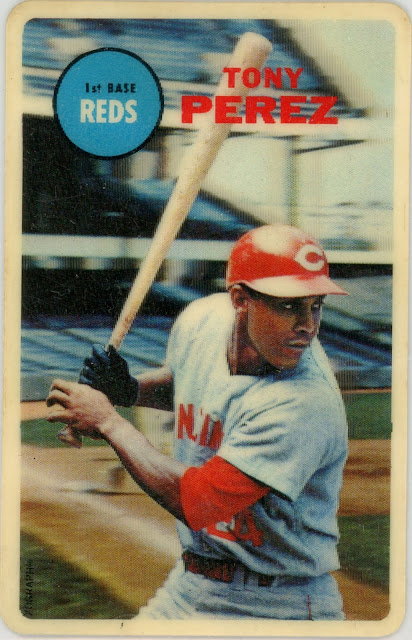 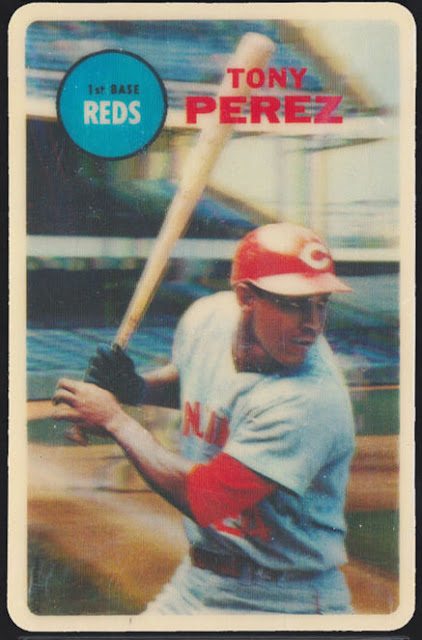 If you look at the space between his forearms and just under his right forearm, you can see another player behind him; the glove is easy to see on the top card and the player much more distinct overall.

Each variety of card in the set can be found with the blank back as produced for sale or the red and black Xograph stamps. I make that 54 varieties plus 5 proofs presently.  There's also the handful of unissued proofs but the above seven cards are all believed to have been issued or at least produced for retail sale.
Posted by toppcat at 8:00 AM

I wish I had not seen the Flood variant. I am a Cardinals collector and I have a Flood. Now I might have to look into the variation!