I managed to snag a tough Topps Candy piece off the 'bay recently and thought I'd show a little parade of their hybrid Brooklyn-Chattanooga wrappers that appeared following their purchase of Bennett-Hubbard in 1943. A smaller procession of penny gum tab variants made in Brooklyn will close things out today.

The latest addition to the Archives is this impossibly pristine candy wrapper.  It looks like a pretty yummy candy bar if you ask me.  Note the 1943 Copyright: 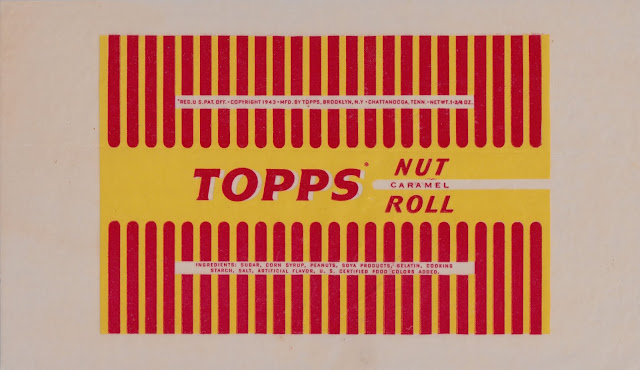 I've been trying to determine if the Opera Bar below was originally a Topps product. Newspaper reports at the time of the Bennett-Hubbard acquisition indicated Topps would continue producing "their" product in Chattanooga at their new plant. Tempering that is the fact I've never seen a reference to Topps producing candy prior to the purchase, although it's only a four year period or so and one that included some WW2 paper drives.

This is another wrapper in amazing shape, I think it and the one above came from a sample stack used by salesmen.  Once again, a 1943 Copyright, obviously obtained for package redesign purposes after Benn-Hubb was in the fold: 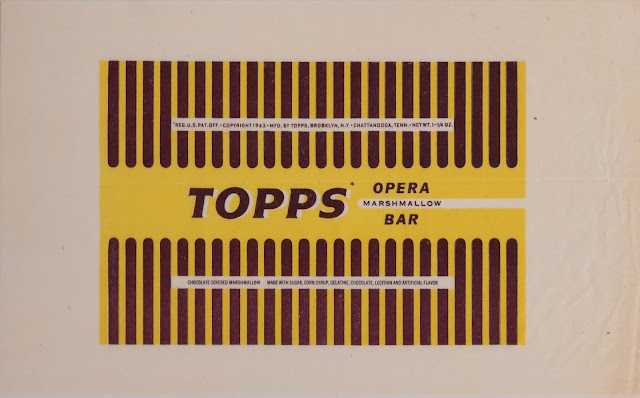 Marshmallow could stretch scarce sugar supplies, which were about to be rationed in the U.S. as the war raged on (and probably spurred the acquisition) as this next piece, which looks to have actually been wrapped around a candy bar, attests: 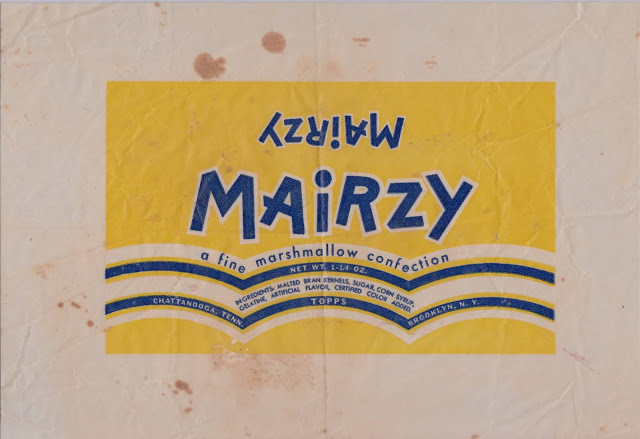 I don't really like the look of that wrapper (it's even uglier in person) but imagine the yellow was thought to be snazzy enough to grab a kid's attention. At a guess I'd say Topps didn't bother waiting for a new copyright for the wrapper meaning this was likely a new product sold during World War 2 whereas the Caramel Nut Roll and Opera Bar could and likely did continue in production for several years after 1943.  Topps would eventually re-brand their candy production operations as Topps Candy Division, until the early 1950's when they just snugged it under the main Topps Chewing Gum umbrella.

Meanwhile back at the ranch, Topps bought out Shapiro Candy Manufacturing in 1944 which netted them not only a better sugar ration and more manufacturing capability, it also presented access to waterborne transportation via the 4th Street Basin, right across the avenue and which connected to the Gowanus Canal and eventually the Atlantic Ocean.  A mere three miles from Topps HQ at 134 Broadway in Williamsburg at the time of the purchase, it became an additional warehouse for Topps after they moved all executive and manufacturing functions into Bush Terminal in mid-1946.  It appears all the prior Topps plants and offices in Brooklyn served such a purpose until the 1966 Duryea move, when only the executives and office staff remained behind.

This is a rare 1939 Topps Gum tab wrapper with Shapiro shown as the manufacturer and would have barely outlasted the war as Topps went for a slight redesign and new copyrights in 1946:

I suspect Topps still manufactured this product at their original Gretsch Building plant location at 60 Broadway but named Shapiro as manufacturer to allow for expanded sugar ration compliance.  The normal 1939 wrapper looked like this-I imagine amending the indicia slightly was no reason to obtain a new copyright.:

That little notch at the top is what leads me back to the Gretsch Building!

There's a 1939 Topps/Brooklyn variety as well.  I'm not sure which came first and this is actually BFF o'the Archive Jeff Shepherd's as I don't have this variant yet: