More catching up today lids as the new "deets" arriving at the Main Topps Archives Research Center continue unabated! As you may surmise from this post's title, this will be a far ranging piece today.

Friend o'the Archive Jason Rhodes has sent along a pair and a half of goodies, first up, a very old and wonderfully preserved Bazooka nickel roll wrapper with a "ride-along" bonus thrown in by the seller: 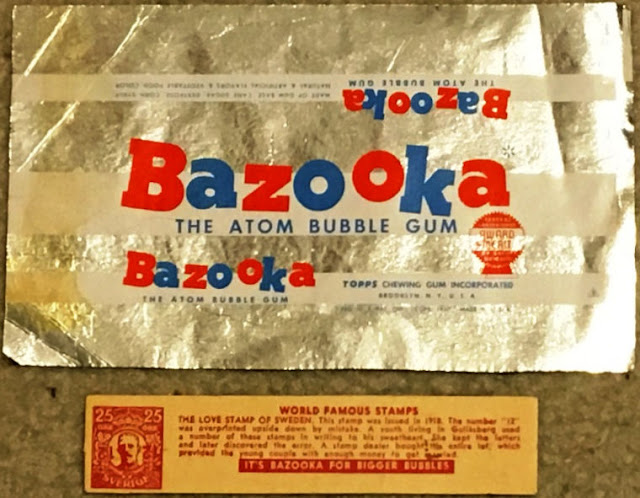 Nice freebie on that tray card Jason! I believe that "Award of Merit" wrapper debuted in mid-1949, replacing a Parents Magazine Seal,which could help date the World Famous Stamps Tray Card but that style may have persisted into 1952-53.

The reverse has a Peg comic, also possible from 1949-53 per my extant notes so a DC Comics/Topps timeline narrowing needs to be carried out! 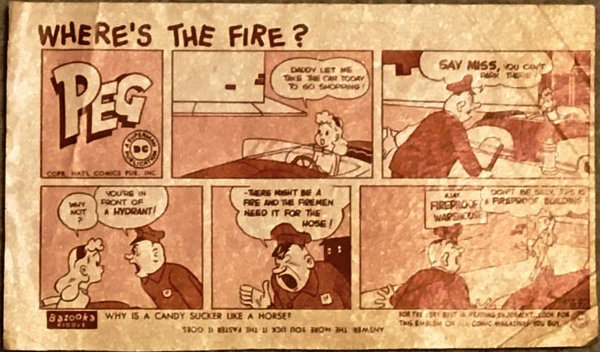 Mr. Rhodes though was not even close to done as he alerted me to this lot over at The Sports Auction Co.  Check this bad boy out: 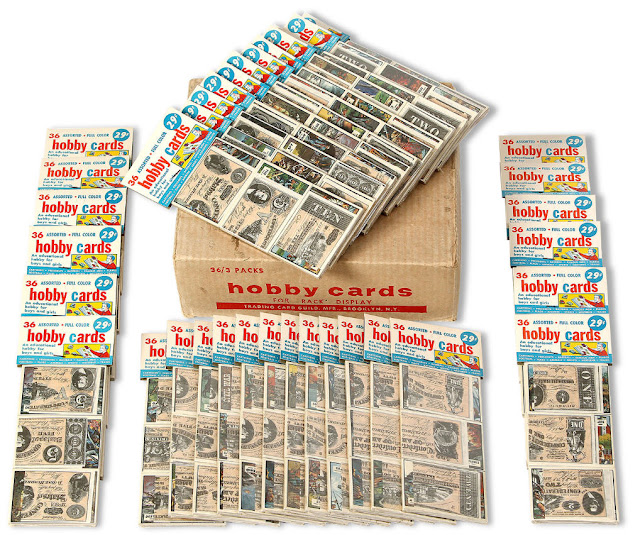 That is the first time I have seen a case for the Trading Card Guild Rak Paks, although I have seen the 1962 Civil War News raks before. That seems like a very small case for the Topps non-confectionery operation and I suspect it's more of a box component with several in a master case. CWN has been the subject of several finds over the years; it is quite abundant in nice shape as a result.

BFF o'the Archive Jeff Shepherd sent along a scan from an auction he ran on eBay with a 1970 Bazooka Twin-Pack (spoiler alert, I won the auction) that seems to be a successor to the 1969 Twin-Pack recently featured here: 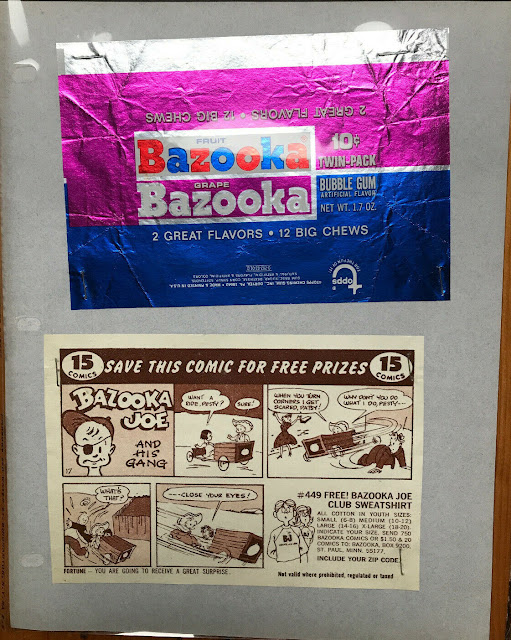 As you can see, that's from a file book and it turns out it was sold by (and from, of course) the Topps Vault.  Seemingly, the confectionery only items were filed in a different manner than Woody Gelman's "Big Idea" sample card filing and reference system. My notion that the 1969 Twin-Pack wrapper was the latest sepia issue is therefore incorrect but both years' offerings are rare birds and the comics appear to be part of the same sequence as the 1969 wrapper ensconced #10 and here we have jumped to #17 a year later. 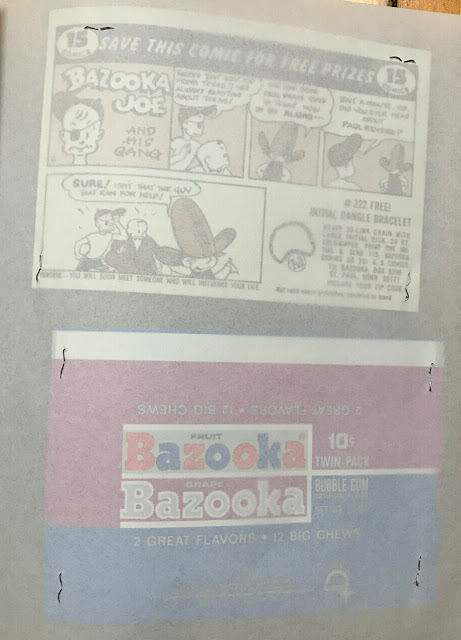 The distribution in packs of the 1973 Baseball Blue Team Checklists has been speculated upon in various forums and 10 cent wax is known to some as "being blue" on occasion, as this old Huggins & Scott description shows: 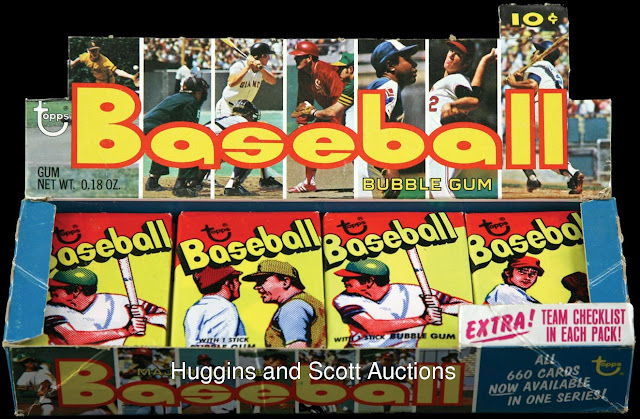 A thing of beauty is a joy forever, or so the poem goes....and "all 660" packs seem to hold the key to the blue checklists, which is eminently logical.

Here's the back of those packs, note the commodity code has a stock number of 401, which is correct for 1973: 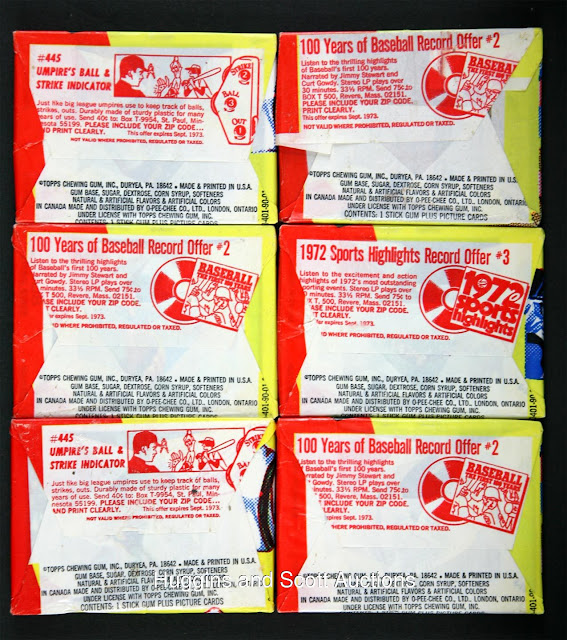 However, a recent eBay auction revealed the bottom of the "blue checklist" wax box and there is a little twist-check out the commodity code, which is in red for some odd reason.

Black code there, as was usually the case and the same with the 401, which matches the wax packs. It makes sense the team checklists came in the "all 660" boxes and I suspect the red coding is related to that (and the little pop up tab on the front of the box). At first I thought it related to a long form, slap-dash test within the regular distribution since 1974's 15 cent long form test had a black commodity code, but Bill Haber explained it all (and then some) in the March 1973 issue of The Ballcard Collector revealing it was planned and rolled out from the get-go: 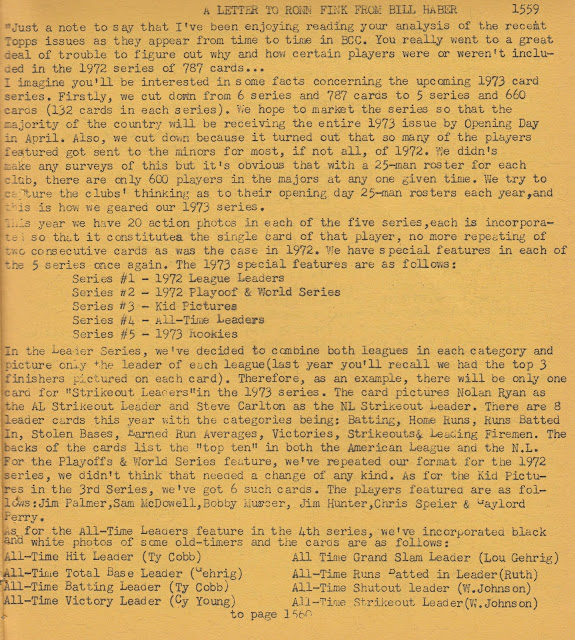 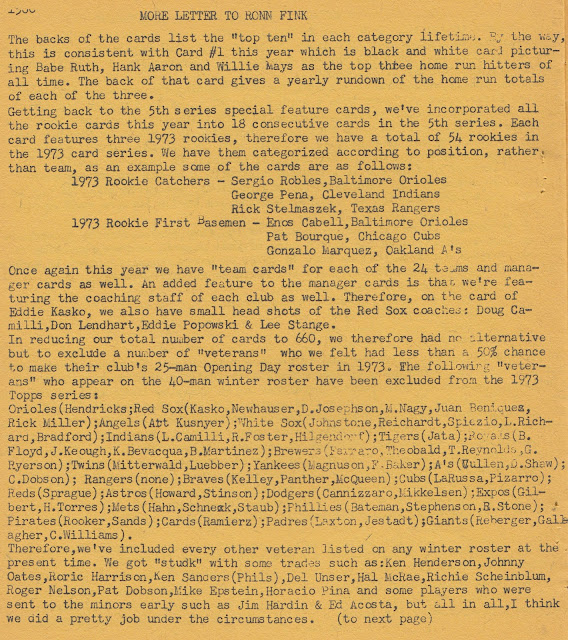 The cut down to 660 from 787 was assuredly due to the Topps IPO in March 1972 and the planning for 1973 Baseball would have commenced during the dog days of the '72 season. I do wonder though, if the renegotiated MLBPA CBA following the 1972 strike had anything to do with this, maybe with the union desiring to shuffle more revenue to more established major league players.

The stock number middle digit changed as well on that "all 660" box and 451 is not a number Topps trotted out often (the stock numbers would cycle through on roughly a two year basis most of the time). What does it all mean?  Maybe someday all will be revealed as more information is developed on Topps packaging ideosyncracies.

And to top it off, eBay recently had the almost unknown 1973 Team Checklist premium sheet, which went for a song (and which I missed seeing-rats!):

There were still interesting things happening as the 70's wore on!
Posted by toppcat at 8:00 AM

Interesting that Rusty Staub was on that list of players that Topps didn't expect to make the 25-man roster in 1973. Staub was certainly going to make the roster--he had missed much of the previous season after getting his hand broken by a pitch, but he hit .313 when he was in and even got MVP votes. It seems likely that Staub wasn't under contract with Topps at the time (he's not in the 1972 set, either) and this was just an excuse.

The was a most interesting letter from Haber. I don't recall reading such insight regarding the making of a Topps set. Interesting Points. 1. The Question asks about the 1972 set but Haber replies about the 1973 set. 2. His response that the 1973 set was cut down because so many of the players got sent down for most if not all of 1972 (to the minors) is strange and I may try to verify that some day. 3. The comment " we try to capture the clubs thinking" in regards to the 25 man roster is also strange because I wonder what baseball expert(s) they used for all this analysis. 4. He was very dismissive of the 1972 in action cards "no more repeating of two consecutive cards" also weirdly phrased and does not make sense. 5. I love the point about the 20 action cards for each series. One day I hope to verify. Though also weirdly phrased "so each is incorporated so that is constitutes a single card" 6. I wonder if Topps had an agreement to print the photos of the old time players (this also happens in 1975). 7. His comments about no alternative to exclude a number of veterans who we felt had less than 50% chance of making the roster is odd. I wonder what formula was used to decide. 8. The best part of the letter is that HE ACTUALLY LISTED THE PLAYERS WHO DID NOT GET A CARD. Fascinating. Rusty Staub/ Orlando Cepeda, Roberto Clemente.

A question was the Ballcard Collector a living document because these passages are numbered 1559 to 1561.