World On Wheels was a classic Topps Giant Size set, issued in at least two and possibly four series.  The low numbers span from #1-160 and appear to have been issued in two distinct series, generally thought to be 80 cards in number apiece. Ten high numbers follow and while difficult, they are do-able compared to the "high-high" numbers spanning #171-180, which are extremely tough and possibly came out, either in whole or in part, after the rest of the issue had been put to bed.

The method of distribution of the last ten cards has never been fully determined so far as I am aware. A handful of wrappers exist that indicate 1955 models were included, so that makes sense but almost all end at 1954, like so: 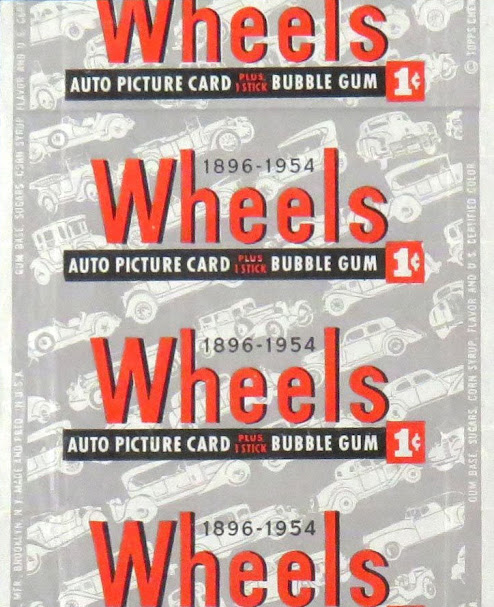 I'll leave them out of the mix here but there are at least two varieties of nickel wrappers as well that span 1896-1954.  They are close to each other in appearance but not quite the same. Here is a "55" one cent wrapper: 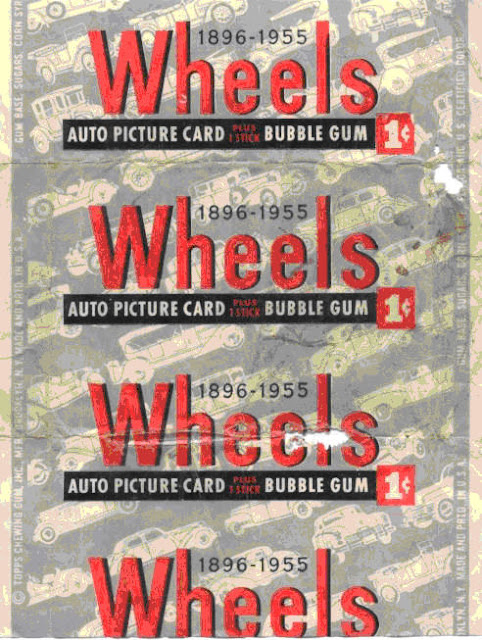 I can't say I've seen a nickel wrap with 1955 on it but that doesn't mean they weren't issued.

Paging through my set the other day, I noticed the subject matter of the four cards that were not 1955 models in the"high-highs", which we will get back to shortly:

The Messerschmitt is the only foreign car in the "high-highs", all the others were US models. We'll also get back to that tidbit momentarily.

These last ten nosebleeders can be found with red backs (matching the first 170 cards), or blue, which is unique to the last ten subjects. The use of blue ink is a mystery and it's worth pointing out the red or blue color bars on the reverses of these ten in either color do not extend to both edges of the card, they fall slightly short, which is not always noticeable due to miscuts, which plague these last ten cards. The color blocks on the front also fall short of their side edge border, which are also sometimes noticeable due to miscuts but seem to have been designed this way. Allowing for the blue ink examples, none of the earlier 170 cards in this set exhibit these characteristics.

Here, check it out.  Here are a high-high front followed by a low number front: 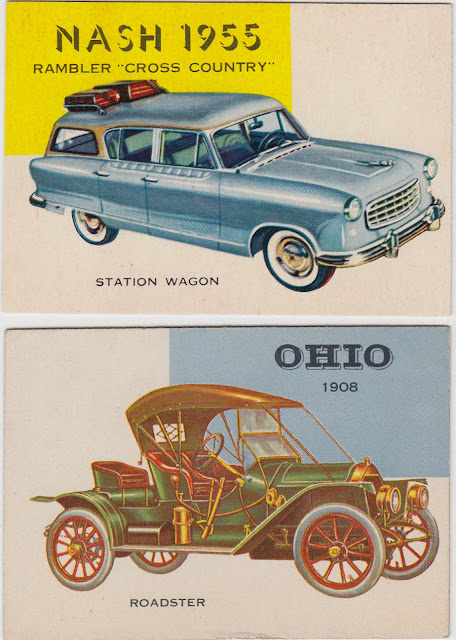 Note how the left yellow border of the Nash does not bleed into the left edge of the card. The backs are like so: 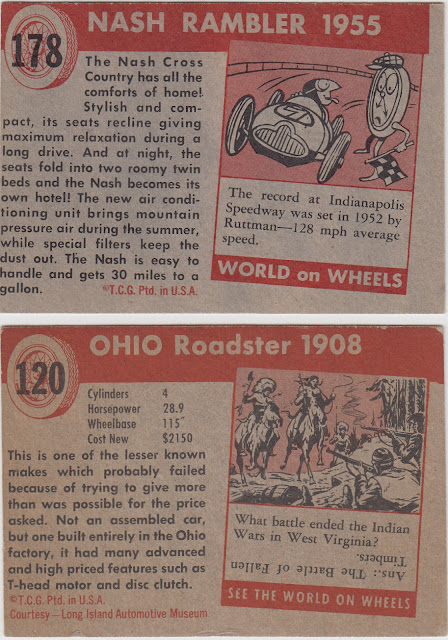 The Roadster is on dingier stock than the Nash and the colors are a little muted but hey are the same reds.  Now here is a Caddy matched with an All American Football player: 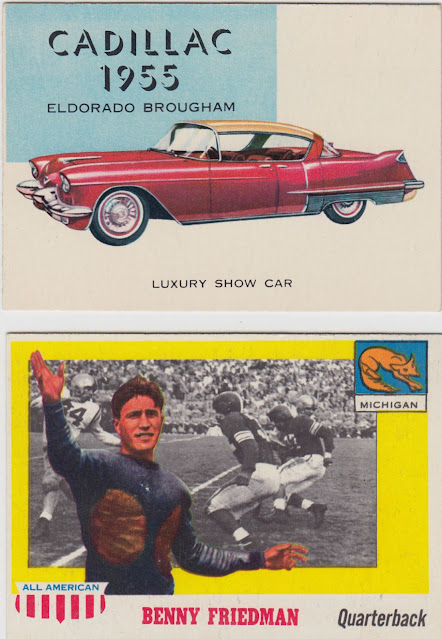 Once again, the left border of the obverse color block does not have a full bleed. Now for the backs: 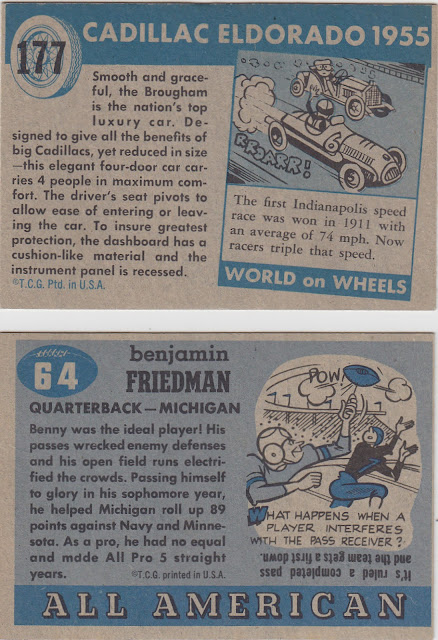 Note the Eldorado's blue color bar does not bleed to either edge!  We have matching blues on these two backs to boot.

So I got to thinking a little and am wondering of the "high-highs" were, in addition to a limited appearance in the "55" wrappers,  partially distributed at the New York International Auto Show, which was held every year back then at Madison Square Garden.  As near as I can tell the event was usually staged back then at the end of March and.or beginning of April.  It kind of makes sense-maybe Topps was a sponsor or just got a contract to print the cards. Maybe they just took advantage and issued a limited release in the NYC metro area.

The International Auto Show was a major event in New York City and society was only just entering a period where such things started to lose their luster to TV, so it's possible but more evidence would be needed.  Other than the Messerschmitt, the three concept cars (Strato-Star, Biscayne, Wildcat III) all were featured at the 1955 event so I have to think there ws some kind of intentional tie-in to the show by Topps.

What I really need is a program from that event to see if there is any reference to Topps.  I'd also love to know how the All American Football set came to use the same reverse color scheme as I doubt they were printed at the same time as the "high-highs" or in time for a spring release (which would be quite odd).  It's worth noting however, that the All American Football set is complete at 100 subjects while the press sheets were comprised of 110 cards.  Also worth noting is Richard Gelman has told me sometimes Topps would use an extra row on a sheet to print something separately.  However, this does not explain the red backed high-highs.