More Sale-a-Brating today campers!  In the wake of a post earlier this month detailing a Topps promotion that dumped excess and returned product marked with a specific bottom stamp (likely to indicate final sale) which you can revisit here, a couple of more stamped box bottoms have emerged as a result of my plea for more examples.  And one is a doozy!

Lonnie Cummins, deep in the middle of his pretty mind-boggling research concerning various Topps codes used over several decades, has come up with a couple more Sale-A-Bration items.  The first is 1967's Who Am I?: 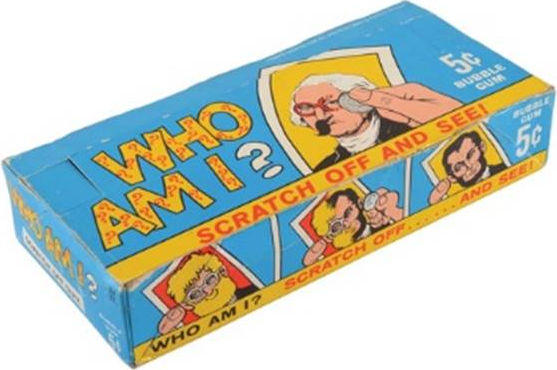 The bottom clearly is dated with a 1967 code (and, of course, the Sale-A-Bration Deal stamp):

Lonnie also sent along a 1967 Wacky Packages box that was part of the deal, as did Friend o'the Archive Dave Schmidt.  There are two key differences between them, which I will get to momentarily.

Note the commodity code ending in 7.  Now for Dave's:

Yup, it ends in an 8!  All else is the same though and after being taken aback, I went to the Wacky Packages Handbook by Phil Argyropoulos and Phil Carpenter and learned that Lonnie's box could theoretically contain the two rare titles Ratz Crackers and Cracked Animals, pulled and then changed due to legal threats.
However Mr. Schmidt also advises that, as you can plainly see, the Campy Spider Soup art on the box was changed to Tasty Spider Soup, due to a cease-and-desist letter from Campbell's Soup. The Campy's sticker was also pulled/changed to Chock Full O'Nuts And Bolts but what's odd is that the wax wrapper, which featured Campy's as well, never got revised like the box art. This is probably due to Campy's getting pulled well after Ratz Crackers and Cracked Animals. Topps was quite possibly dumping a product that had been peppered with legally dubious content by sliding it into the Sale-A-Bration deal.
But which pulled stickers might be withing such a box? There's at least nine others that were changed in the series, including sticker #21, which was changed twice! I wonder if these specially stamped boxes were sleeved, with two miscellaneous boxes per sleeve? They did that in the early 70's for sure. Sneaky Topps, right? But if there was a sleeve containing two display boxes, then the cover art was hidden, which is a neat little trick too.
So that's all pretty cool and still makes me think this was a 1968/69-centric promotion, although it could easily have begun in 1967 with a Wacky-centric product dump!
Posted by toppcat at 8:00 AM

Email ThisBlogThis!Share to TwitterShare to FacebookShare to Pinterest
Labels: 1967 Topps Wacky Packages, 1967 Topps Who Am I?, Topps Sale-A-Bration Deal