I am on a basketball kick of late, there's no doubt about it. And what better set than to take a peek at than one of my all time favorites, the 1971-72 Topps Basketball Trio Stickers!  I collected the 1970, 71, and 72 Topps Basketball sets quite heavily as a kid and 1971 was a real boon year for me. As a result, I had a boatload of the Trio Stickers and drove my parents crazy sticking them everywhere, especially the little team logos. Of particular interest to me that year were the ABA regular issue cards and insert stickers as I was mad for the league and in particular the NY Nets. None of these, as you can imagine, survived as the years zipped along.

The black borders of the Trios mimiced the Baseball cards issued earlier in 1971.  I put together a set quite some time ago and enjoy it just as much as I did as a kid, although all my stickers now remain unpeeled and unstuck!  So I was quite pleased to find this uncut sheet image in an old Huggins & Scott auction and add it to my collection of partial sheet scans.  And then it got.....weird. 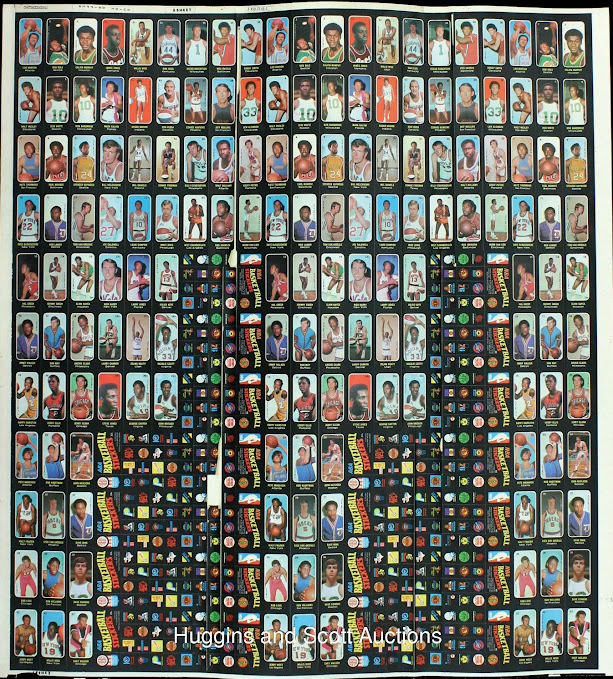 Logo sticker heaven!  Now the full set is comprised of 46 numbered stickers, where each little 1/3 slice of a full sticker has a number (so three per "card") and the logo sticker has a number as well.  In addition the ABA cards have an "A" suffix after their numbers.  There's 10 full stickers of ABA'ers: 7 trios and three variants of the logo stickers.  The ABA run spans numbers 1A though 24A.
NBA stickers are numbered 1 through 46, with 15 trios and a lone logo sticker.  So that's kind of weird, right?  Why three ABA logo variants and none for the NBA? Well I think it had to do with the number of teams in each league. The ABA had ten teams for the 1971-72 season and the NBA 17. So Topps jumbled up the ABA logos, essentially drawing attention away from the "repeats" on each sticker.
Here's an example: 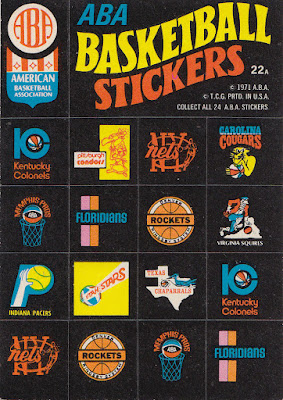 Some germane and not so germane points. I saw most of these teams play and usually up close at the Nets home arena for most of the season, The Island Garden, which essentially looked like a high school gym and was possibly the worst major sports venue in the United States at the time, although personally I loved it.
They moved to the Nassau Coliseum as the season wore on but you would get sweat on you from the players if you sat close enough to the court at Island Garden.  After a game you could wander onto the court and mingle with the players and get autographs. Not so at the Coliseum.  I still have some of the stubs from Island Garden: 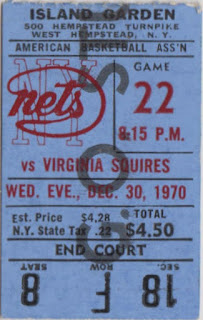 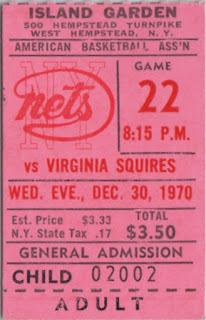 A year prior to the stickers but you can't have everything.  The End Court seating was literally pull out bleachers! I was 9, so I guess I just fit in between the assigned spots! I saw a real circus there too around this time, with a full sideshow (sword swallowers, fat lady, the whole nine yards).  I'm sure it was a broken down, decrepit place at the time but it shines brightly in my memory and always will.
While I'm at it, the Carolina Cougars logo sticker above is great but not my favorite version of it, that being this one:

OK, back to the set. You could also peel off and stick the ABA logo and even the main splash at upper right.
The NBA logo sticker had all 17 teams represented along with the official league logo (as always, modeled on Jerry West) and splash: 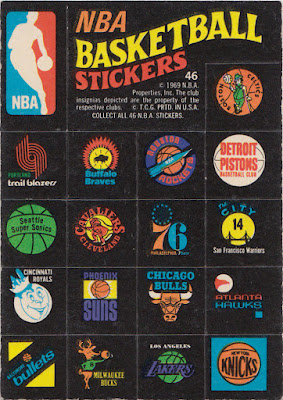 That upper right Celtics logo has always bothered me.  Why didn't Topps just make two ABA logo stickers and two for the NBA, leaving intact the 4x4 grid on the latter? The answer may be that the arrays we see must have been due to the need for die cutting, as Topps would need to line up the ABA logo stickers in one column (or row, depending) due to the differing configuration when compared to the NBA logos. But here's the kicker: there's 8 impressions of the three ABA stickers (22A, 23A and 24A if you're playing at home) on the sheet but 14 of the NBA! I'm not even sure what to call that, a Fourteens Print maybe?
So what will we see on the B slit then?  Presented here in two pieces, one from the Topps Vault, the source of the other lost to time, the full array can almost be extrapolated with a little effort: 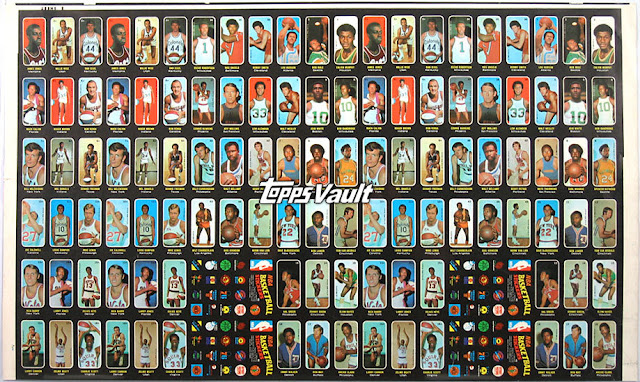 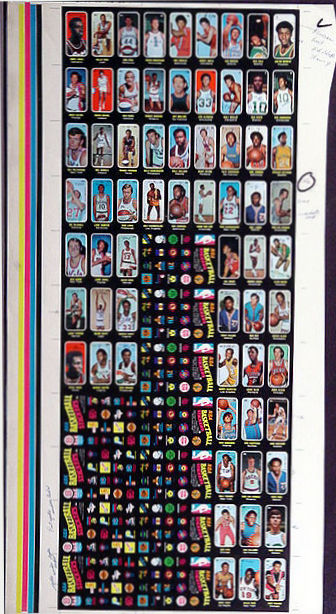 I can't make it out but that looks like Ben Solomon's scrawl at upper right in the waste portion. We have to extrapolate the bottom five rows across four columns but again, the die cutting requirement makes me think there's no mystery to it.
Those sheets can get a little eye-boggling, so here's what I came up with across both slits:
All the ABA and NBA trios appear five times across both, except for trios headed with numbers 34, 37, 40 and 43 which appear only four times and are short printed by 20% compared to the other trios-these are the only true short prints in the set and include stickers of Oscar Robertson, Wes Unseld, Connie Hawkins, Lew Alcindor, Billy Cunningham and Wilt Chamberlain.  There's 28 NBA logo stickers (#46) and 20 ABA, with 22A being overprinted at twice the rate of the other two ABA logo stickers (23A and 24A).  99 NBA stickers and 55 ABA stickers make up the 154 slit slots.  Looking at it that way makes it seem quite organized in fact.
Here's something interesting as well, the next year O-Pee-Chee used the trio format for a series of 72 Canadian Football League subjects; here's a peek at an uncut sheet portion: 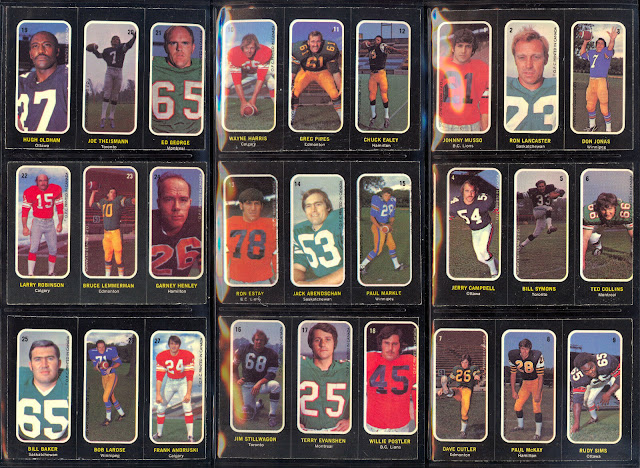 Neat, huh?!  I'm not going to get into these (well, not yet maybe) but at least one uncut slit is known and it has some oddities as well, although OPC did not make up team logos for the set.  Whew!

The black borders are susceptible to nicking but the stickers are beautiful!