I'm sure some regular readers of this blog recall the old Baseball Hobby News, which competed against The Trader Speaks, Sports Collectors Digest and a couple other of the more "major" pubs back in the heady hobby days of the late 1970's and into the 1990's.  I subscribed from around 1982 to 1990 and BHN probably peaked around 1986 in terms of content and influence. Published by Frank and Vivian Barning, a married couple who were active card dealers, BHN was probably the best in terms of "pure" hobby content among the major hobby periodicals of the time.

When this July 1986 issue came out, Beckett was just getting his footing in the pricing rag trade (where your faithful blogger also trafficked at Current Card Prices in its two earliest years), Baseball Card News was in year three of existence and The Trader Speaks was a distant memory that remained adrift then lost for good after its mailing list was bought by Sports Collectors Digest in 1984 and a relaunch (as a monthly SCD special insert) failed to generate any traction for the brand.  There were others at the fringes and also the formidable Baseball Cards magazine, slickly produced and sold at newsstands across the country.  Tuff Stuff  was another slicker looking mag that debuted in 1984;  Baseball Hobby News persisted amid this competition for a quarter-century (1979-93): 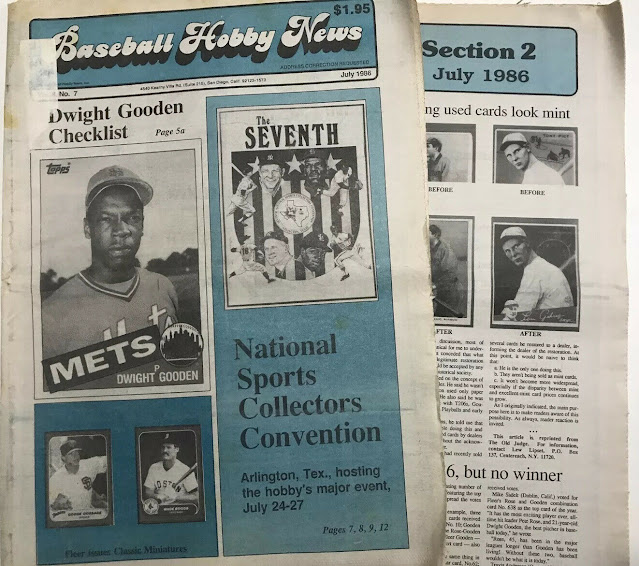 Frank Barning passed away last month after a long illness.  I never met him, not even at a show, but he always seemed like an old friend, his smiling face atop his regular "Barnstorming" column (which later became a less hobby-centric blog) saying hello every month:

He also made it onto a Topps Stadium of Stars card, shot at at the 1992 Atlanta National, each subject (66 hobby-centric folks) getting a 500 count "vending box"  of their own cards, which used the 1992 retail Topps design: 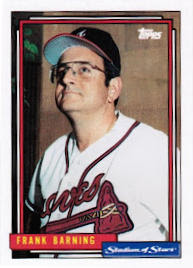 I've heard Frank never liked this image but trust me, it's better than many others in the set!
Here's the back: 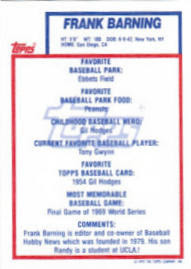 It's a little fuzzy, sorry.  I'll be looking a the set, and a companion issue, hopefully with less fuzz, shortly but wanted to pay tribute to a hobby lifer.  RIP.
Posted by toppcat at 8:00 AM

Very sorry to hear of Frank's passing. I *loved* Baseball Hobby News. I'd read it over and over, to the point where forty years later I still remember specific passages. At a time when there was very little information out there, it was absolutely transformative for me.

I actually originally put together the Wikipedia article on BHN, so if anyone can add to it, especially with sources, that would be great.

I never met him either, but, as you say, reading BHN one felt as though one knew him. Condolences to Vivian and their family.

Same here. Was a long time of BHN during the 70's and 80's. The Barning's publication was far more informative the Sports Collectors Digest was at the time. I have saved many old issues and still love to re-read the stories. Condolences to his wife Vivian and Family.