Wouldn't It Be Nice

Some more white wax test packs and wrappers today kids!  I'm really just scratching the surface but dig the look of these.

Captain Nice debuted and was cancelled by NBC, all in 1967.  Created by Buck Henry (Get Smart), the show, which always struck me as having a certain Don Martin-esque inspiration, never gained traction with viewers despite a pretty good cast (William Daniels, Amy Prentiss, Alice Ghostley).  A mid-season replacement show, fifteen episodes came and went in the span of four months, in a time slot that competed with The Lucy Show.  Topps tested a 30 card set based upon the show and it seems possible they just pulled the plug when it was clear it would not be renewed.  It's a tough test issue as such things go; I can't even find an unopened pack scan, just a wrapper: 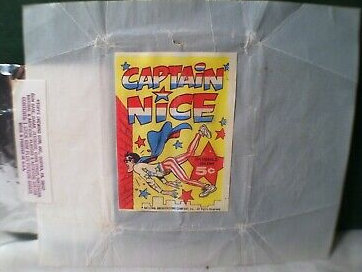 Note how translucent the wrapper is, especially when you look at the left panel where the ingredients label is affixed. I suspect Topps could have burned off excess stock of these cards in 1967's Hallowe'en Fun Packs given the relative lack of wrappers out there.  Black and white images probably didn't help matters: 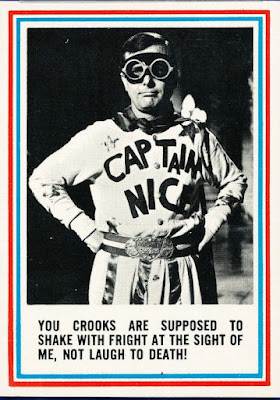 There was a little comic strip on the reverse that's far more colorful than the obverse's subject matter: 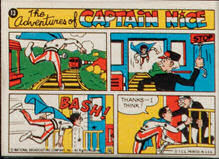 Speaking comic strip reverses, Topps tested a set of 55 cards in 1968 based upon the Irwin Allen TV series Land of the Giants.  I've covered these before but today's theme begs a repeat of sorts: 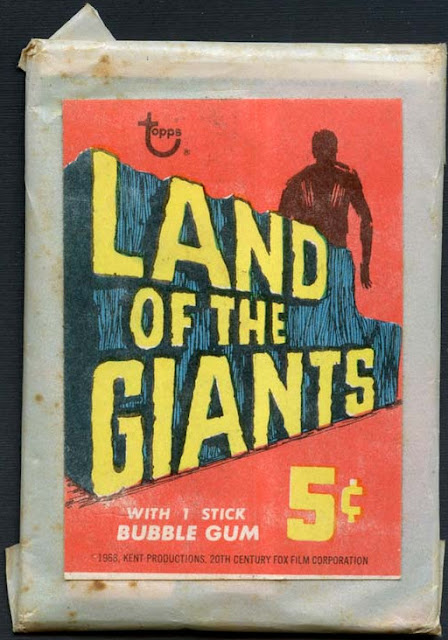 As noted above, the white test wrappers were fairly translucent, nicely evidenced here on the reverse of the pack (which is missing the ingredients label, a fairly common occurrence on surviving test pack examples of any flavor): 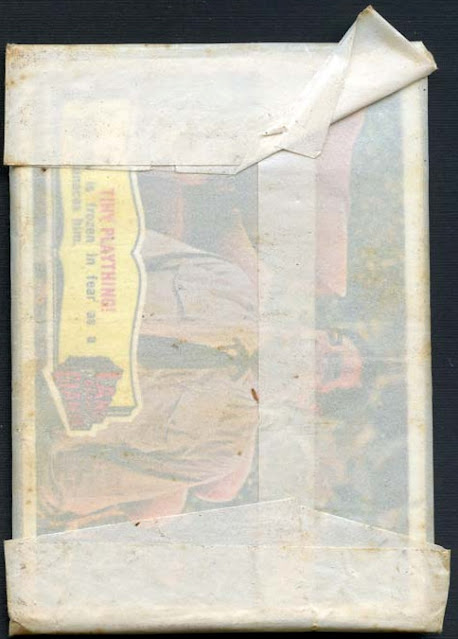 The cards were just as ridiculous as the show, where the premise was seven passengers on a commuter spaceship called the "Spindrift" went awry and crashed in a land of, well, giants with a decided mean streak: 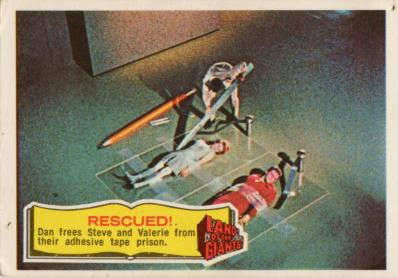 The show was designed with all sorts of size-related gimmicks taking center stage. The first 44 cards had a comic strip on the reverse, just like Captain Nice: 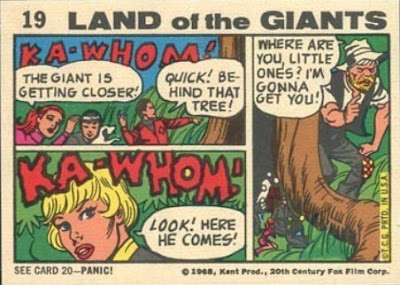 All the online and print set checklists I can find indicate the next ten cards had a puzzle back and the final card had a checklist, possibly just of the comic strip backs but I've never seen any of those that I can recall; it's another really-hard-to-find test issue for sure. PSA pop reports don't indicate the last 11 cards are more difficult but it's kinda weird as the highest count of any card in the set over there is 10.  I wonder why LOTG got a 55 card tryout vs. only 30 for Captain Nice?  Perhaps there were licensing issues for certain actors in the latter?

The show and set were not a big hit here - it did better than Captain Nice though, lasting two full seasons from 1968-70 -  but A&BC released the series in the UK as a regular issue. The US test cards are scarce and have indicia with a USA printing notation.  The UK indicia references A&BC and are slightly smaller in size.

A year later, 1969 brought Baseball Mini Stickers, 25 in number with four stickers per card yielding 100 subjects.  These are hotly pursued by collectors today and while there are about five times as many overall compared to Land of the Giants, they are tough: The random selection of stickers, which replicated the regular issue cards, could be bizarre: 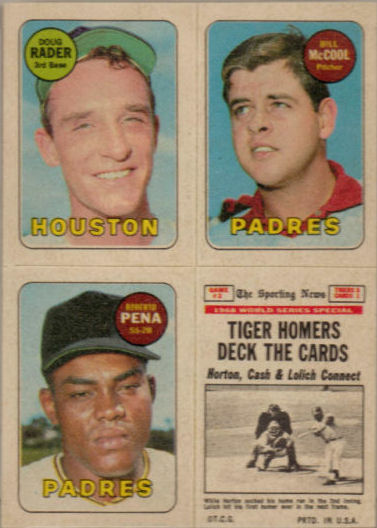 More often than not, these are referred to as 4 on 1 Stickers and I've covered these extensively here. I think they look great but it seems they didn't test well.  Go figure...

Wait a second. I always thought the Land of the Giants was a great premise and loved the gimmicks (I have to admit I have not seen it probably in at least 40-45 years). What I remember was they landed on an authoritarian type planet and those set models were just fantastic(for the 60s).

That a cool card to - look at that pencil.