Topps was starting to experiment a bit with production methods and materials in the years leading up to their February 1966 plant and warehouse move from Brooklyn to Duryea, Pennsylvania.  For reasons that may or may not be linked, after this occured some really innovative products and almost-products being worked upon by Woody Gelman's New Product Development department for a period of six or seven years, right up until the company started reigning in costs to prepare for their IPO.  NPD were still getting their bearings though in 1965 when they popped out not one but two sets featuring foil embossing.

The most well-known of these embossed sets are the 72 inserts that came with the 1965 Baseball cards,  which I've touched upon these briefly in the past and won't dwell on here.  That set is heavily documented and I'll probably end up dissecting it more fully down the road in a sports inserts series I'm contemplating anyway.  Those cards were essentially credit card sized while today's subject, Presidents and Famous Americans, were produced as "tall boys" that measured 2 1/2" x 4 11/16".  Topps was enamored with using these larger cards in many of their mainstream 1964-65 issues, for reasons I cannot quite determine.

The 44 subjects in the set include 35 U.S. Presidents and 9 Famous Americans. The run of Chief Executives includes Lyndon Johnson and with Grover Cleveland's two terms only requiring a single card, the first 35 cards in the set are presented in a straightforward chronological manner, with a short paragraph of description and the some indicia. The cards, which were blank backed, spread the subjects amid five colors, with black reserved for Presidents who had been assassinated, as shown here: 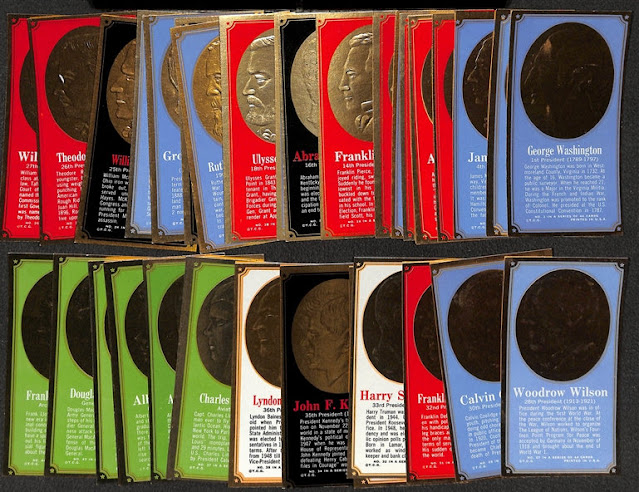 Presidents who did not die at the hands of others were issued with red, white or blue backgrounds and the Famous Americans were all done in green. There is no variation among colors and subjects, if Woodrow Wilson was blue, he stayed blue.
The wrapper, to my eye,  is one of the better ones produced by Topps in the 60's and the tall boy format let them go horizontal, unleashing Mount Rushmore to great effect: 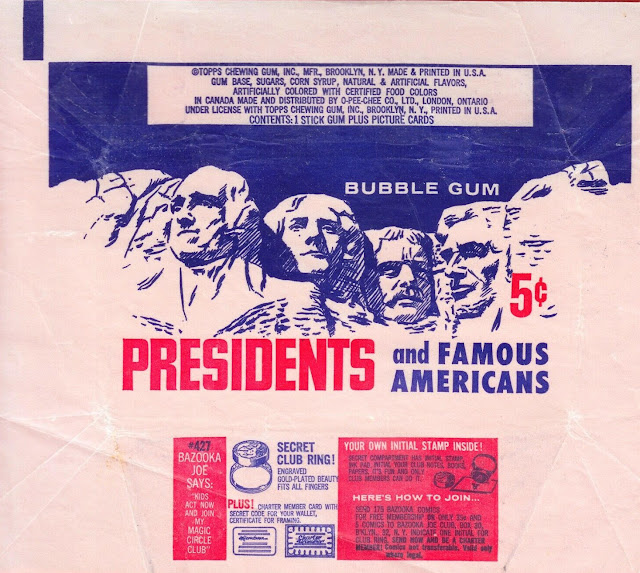 The red, white & blue theme was also one dear to the Shorin family, the owners of Topps, going back to 1908 and Morris Shorin's American Leaf Tobacco Company, although no examples of any ephemera exist to show this, only family recollections. This patriotic livery is still on display today with Bazooka.

I'll not bother with a checklist for all 44 cards but will detail the 9 Famous Americans that close out the set:

While one of the Wright brothers apparently got short shrift, the inclusion of another similarly surnamed fellow, the architect Frank Lloyd Wright, was unexpected: 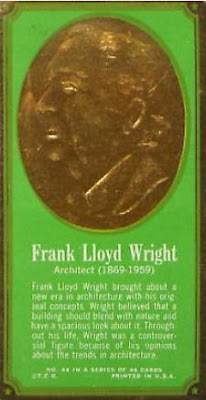 Most of the others are no-brainers though and it's worth noting Albert Einstein was a frequently depicted Topps subject, going back to 1952's Look 'N' See set.

As you can imagine, the combination of the tall boy sizing and foil embossing is not one that allowed higher grade examples to survive in any kind of quantity.  The set also seems to have been pretty limited in release and it's not the easiest thing to find these days. Demand is low and let's face it, the portraits look, well, kinda boring.  It's an odd duck of a set, albeit one that pulled together a few overarching themes at Topps in 1965.

I've wanted to say that the white backgrounds where guys who were still alive in 1965 except that Hoover died in 1964. Red/Blue feels like it should be political party but that falls apart i the 1st 4 cards even if it's used to just denote a change in party.

I don't know the exact reason but my guess is getting entire original 6 NHL (1964) after Parkhurst stop producing Det/Mon/Tor and losing the NFL license to Philadelphia in 1964 is the major reason (but maybe not only).

Nick, you may be correct on the white. The set could have been prepared while Hoover was still alive. DOD was 10/20/64 and as noted repeatedly here on the blog, issue dates are fungible sometimes. I'd love to see an uncut sheet.