Topps went all in on 1980 issues concerning The Empire Strikes Back, the second movie in the now ubiquitous Star Wars franchise.  Following the five series of standard sized cards (330 of 'em plus 55 stickers) and a host of ancillary issues released in the wake of the original Star Wars (now often called "A New Hope"), The Empire Strikes Back was issued in only three series but had more cards (352) and stickers (88) than the earlier release. Massively overproduced, they do not have quite the charm or attraction of the 1977 series. I'm not even here to discuss them today, just giving some background. The sets I do want to discuss are The Empire Strikes Back Giant Photocards. And that is sets, plural as Topps issued a test version of these 5" x 7" cards first. This was the height of Topps' fascination with cards of this size.

The 19th issue of Les Davis' The Wrapper (May 15-July 1, 1981) has the deets on the test issue from John Neuner (who looks like he had a bead on some Topps test stores in the NYC metro area); it appears like it was issued at two price points and - no surprise - dried up very fast: 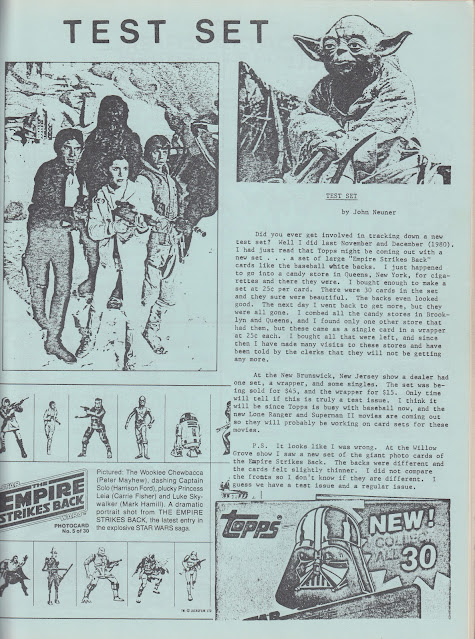 The test set has the same 16 illustrations of characters from the movie on the reverse of each card and it's a tough one.  It contains all 30 subjects found in the regular issue and the wrapper seems to use the same graphics, at least on the front, between both sets.  Here is a test box, with a pack peeking out, with folds as described in the article: 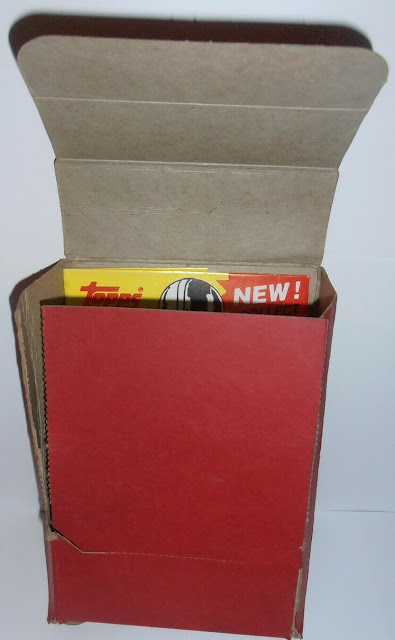 And here is said wrapper: 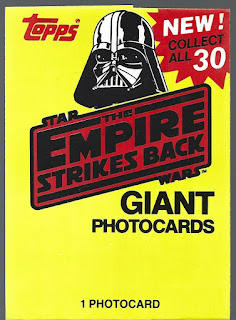 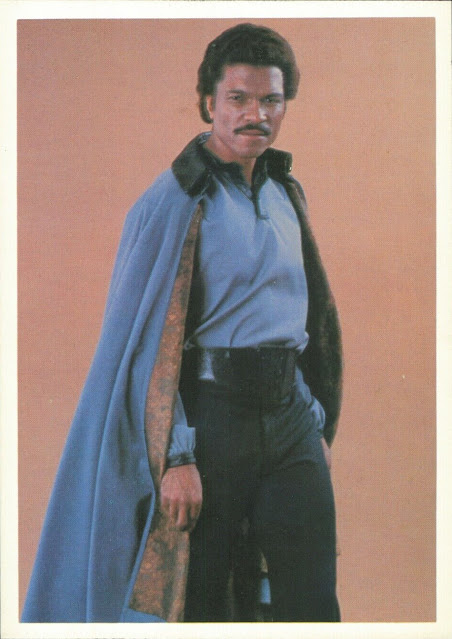 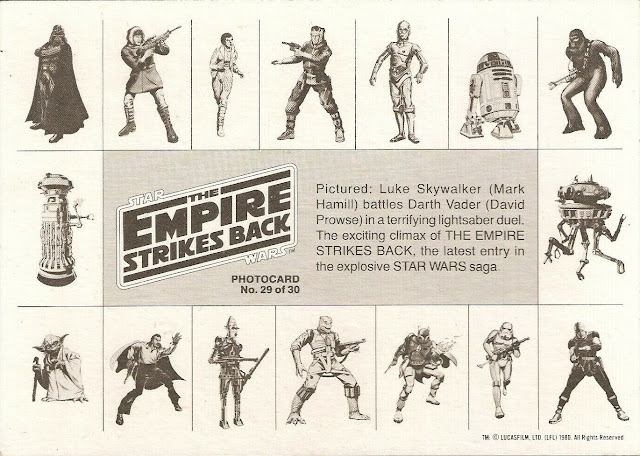 The retail issue had a different box, of course, and the wrapper was crimped.  Here's the box, which looks kind of spare as Topps was getting these out right quick: 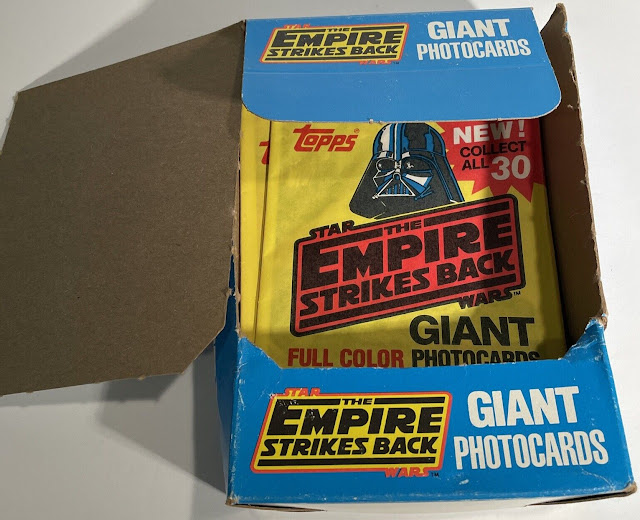 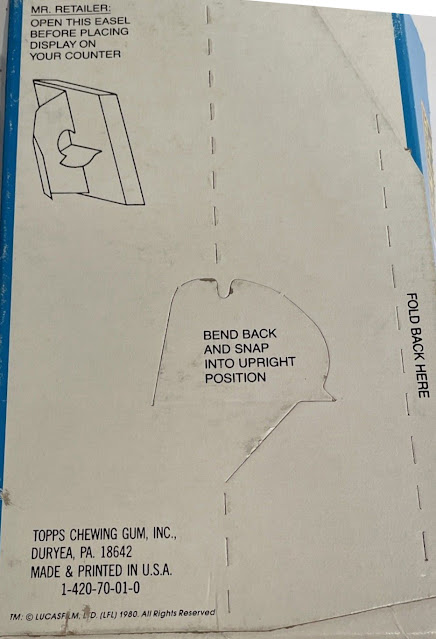 The retail set, per Neuner's article, is apparently on slightly thinner stock (I do not have a test type unfortunately, so have to take his word for it) and the reverses have been changed.  Instead of detailing what card you had (29 of 30 on the test example above), Topps went with two visual checklists and, while numbered thereon, dropped the numbering from the card itself! 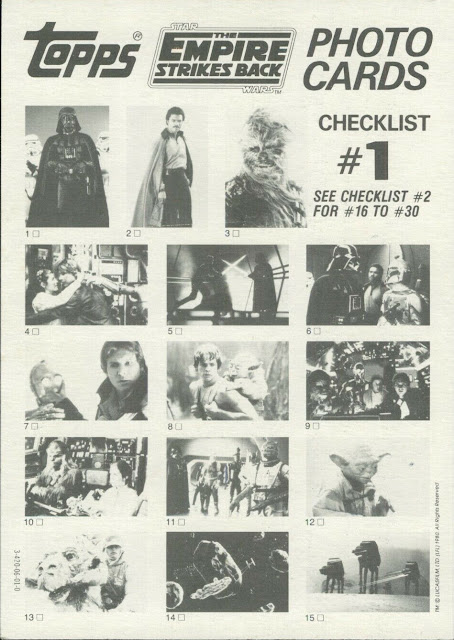 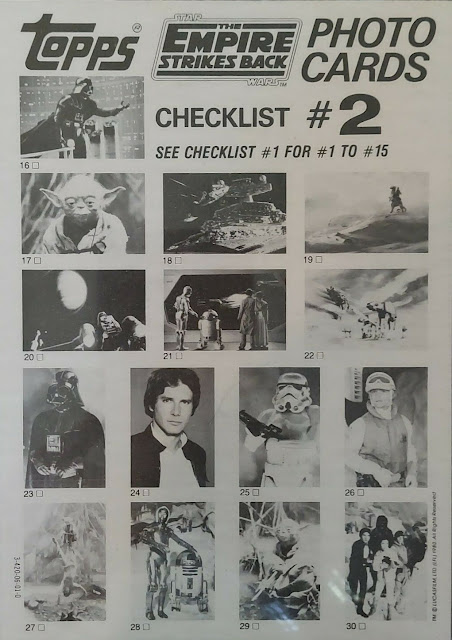 Weird, right? Well it's a great looking set anyway!
Posted by toppcat at 8:00 AM

Email ThisBlogThis!Share to TwitterShare to FacebookShare to Pinterest
Labels: 1980 Topps The Empire Strikes Back Giant Photocards

How much do the actions of someone like Neuner mess up Topps's testing? Seems like it could skew their results.

Never heard of that Lone Ranger movie. Guess it was a bust. Did Topps ever make cards for it? (Christopher Lloyd as Butch Cavendish - might have to check that movie out.)

I've never heard even a whisper about a Topps Lone Ranger project circa 1980-81, Neuner may have heard of it though. The movie looks like it came out in 1981 as the Legend of the Lone Ranger, with Lloyd as Cavendish-it looks like a bomb: https://www.imdb.com/title/tt0082648/?ref_=ttls_li_tt