Today we will explore a mysterious hybrid Topps half sheet from what looks to be 1969. But first, we need to peek into the Summer of Love and examine a wonderfully gimmicky set called Who Am I?

Topps used a scratch off feature for the set, which was nothing new as they had used such technology as far back as 1949. What was new however, was using it on the front of the card and not the reverse.  Another gimmick involved a question and answer format, time tested again and again in Topps-land, with some additional hints offered as well if the initial question proved to be too vexing.  It's a great set and one of my favorites from the 60's: 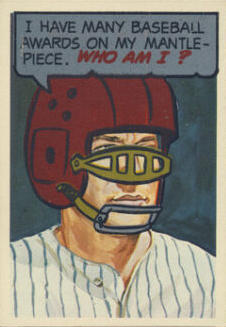 I forgot to mention it but there's four baseball players in the 44 subject set, every one of them a bona fide top-tier Hall-of-Famer. It's made things pricey!   We'll get to the front artwork momentarily but here's the reverse, where the little floating heads looks almost amateurish as they swirl around.  Great design, partially lousy execution! 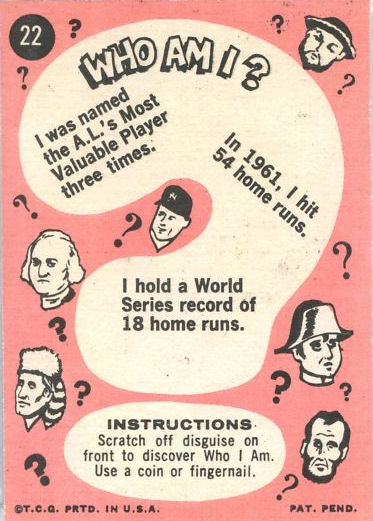 The scratch off material seems to have caused some issues in production as it would often streak the uncoated portion of the front of the card, or foul the reverse with little dots.  Once scratched, the result was revealed: 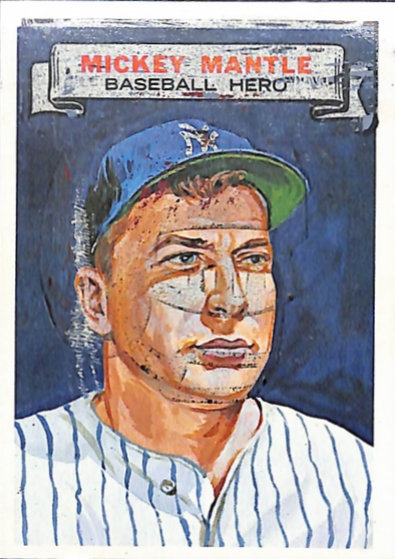 Messy, innit?  That's the general result with these.  The set is loaded with historical figures: 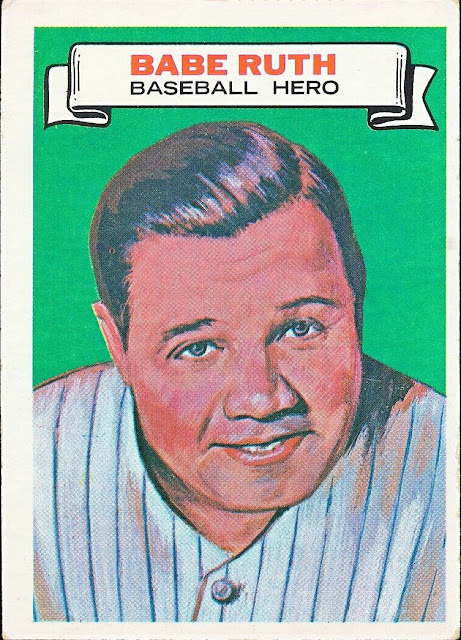 Topps had to change the reverse as there was nothing to scratch off. Note how the dot under the crook is now blank: 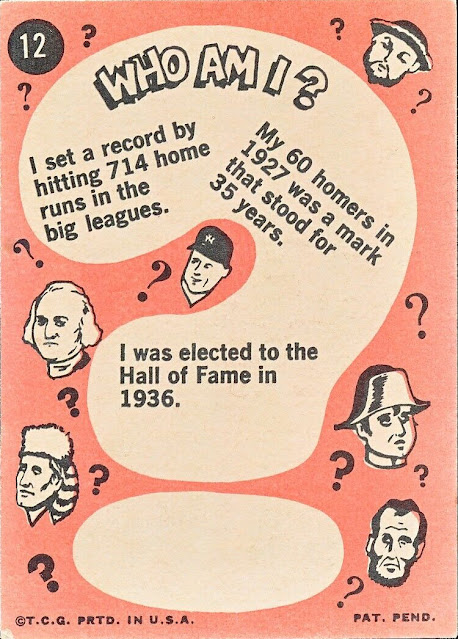 Here's what I think happened, short version first...
In 1968 Topps created a half sheet of cards that mixed bits and pieces of 1965 Hot Rods, 1967 Football, 1968 Baseball for a game produced by Milton Bradley called "Win A Card", as below: 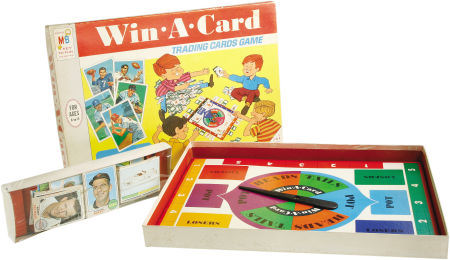 I won't bore you with the details as Dr. Carlton Miller, the absolute expert on the game, has a piece on it over it over at SCD, just click here for a good read on it.  I do note the cards Topps made up on this special sheet have bright yellow backs, a dead giveaway once you've seen some mixed in with, say 1968 Baseball. The "Win A Card" game was a big failure but I think it's the reason the uncoated Who Am I? cards were produced.
Topps produced another hybrid half sheet with salmon colored backs (some call the color coral, it's as above no matter what name is used) that included 38 Who Am I? cards, 44 Hot Rods (again with the Hot Rods!) and 44 Target: Moon cards, which originally hailed from 1958 (and which were, in turn,  a rebranding of 1957's Space cards.
If you have been reading this blog for a while or are a student of the Topps production sheets, you know that a half sheet should have 132 slots.  Well 44+44+38=126, so what happened?  Well, Topps pulled eight Who Am I? cards is what happened and replaced them with eight Double Prints. The sheet was arrayed like so. 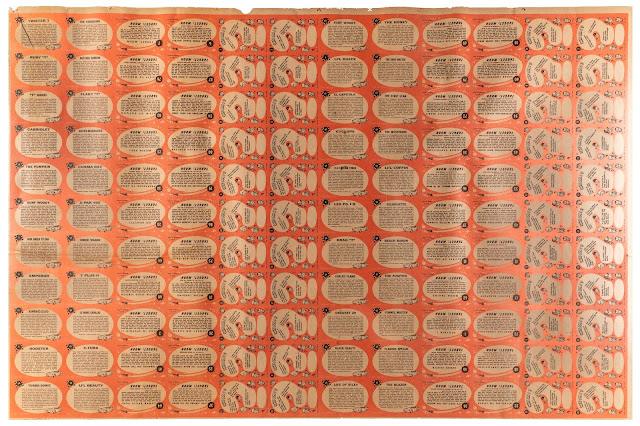 I'm thinking this was made for an intended update of the Milton Bradley game, which never happened as the game company went on to issue a more traditional baseball board game in 1969 instead: 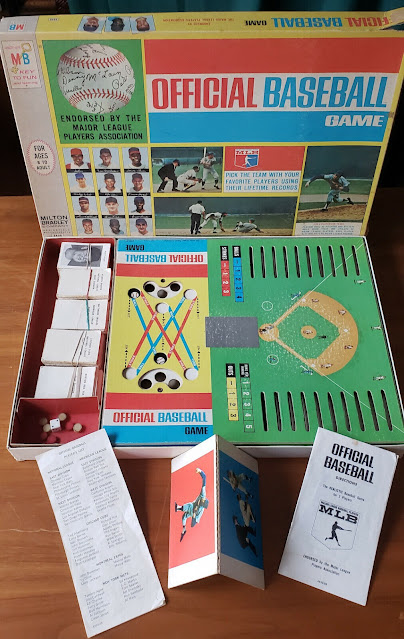 Now that is only a guess but the scuttlebutt on the salmon backed cards has been that they were found in 1969 Fun Packs. This is not something that's 100% proven but it's a persistent story. I have serious doubts that Topps composed and ran off a substantial number of press sheets just to fill up Fun Packs, which they had never done before and never did after from what I know of it. No, they used Fun Packs to get rid of excess inventory and that part of the story makes sense if my theory holds any water. In that scenario Topps salvaged things and used these cards for the 1969 Fun Packs.
Now about those missing eight Who Am I? subjects. Three baseball players weren't reused: Mantle, Willie Mays and Sandy Koufax. Mays and Mantle were active players in 1967 while Koufax had retired on 11/18/66 but his contract, and all MLB ballplayers contracts with Topps, essentially ran season-to-season, with one year extensions for most veteran players built in. Had he played in '67, Koufax's contract likely would have renewed on Opening Day 1967, which was on April 10th.  There is a box proof for Baseball Punch-Out, an ancillary 1967 baseball set Koufax was in after he retired, dated 3/1/67 so his appearance in the coated WAI? set seems like it was composed before the 1967 season commenced, since his retirement voided his one year contract extension.

Mantle retired as well on 3/1/69, five weeks before before the 1969 season kicked off, so he was another baseball subject pulled, maybe for the same reason as Koufax or just due to the changeover to 1969 for the Fun Pack sheet, being a "stale" player by then as the calendar flipped from 1968 to 1969.  Mays was likely on a 1967-69 extended contract that didn't end in until April 7, 1969, or one that ran 1968-70 but Topps never did anything to jeopardize the baseball card licenses and perhaps they just pulled another stale player. Ruth's image was licensed by Topps on and off, as needed, from 1952 until around 1970 I believe, so they kept him on the Fun Pack sheet as they had him in the bag in 1967 and 1969 (Babe is on some Bazooka Baseball All Time Great cards in 1969-70).

Three other 1967 subjects that were dropped can be explained easily enough.  Jackie Kennedy married Ari Onassis on 10/19/68 and was no longer a Kennedy, so she was out. Lady Bird and Lyndon Johnson would have been known to not be continuing on as First Lady and US President. The election was held on 11/5/68 but LBJ had announced he wasn't running well before that and he was out of office on 1/20/69 anyway.

That leaves two headscratchers: Benjamin Franklin and Thomas Edison. About the only thing I can think of is that Edison's card mentions electricity and Franklin, while his card is silent on that, was unmistakably associated with it and they were removed due to an overabundance of caution, lest some kid stick a fork in an outlet.

The Milton Bradley game was released no later than the Summer of 1968 based upon Dr. Miller's recollections, so the timing of an early 1969 update for the game makes sense. Miller notes the 1968 game was prepared to be marketed at the NY Toy Fair, which started on Feb. 16, 1968. Based on all this, I surmise the 1967 coated Who Am I? set was made up sometime in the first six weeks of 1967 and the 1969, uncoated Fun Pack cards were produced after March 1, 1969 and likely after the start of the 1969 baseball season in April. None of this explains why they rejiggered the WAI? cards. Target: Moon makes sense due to the impending moon launch in July 1969 and Hot Rods were always popular with young boys.

For the record, the eight 1969 Who Am I? uncoated Double Prints are: