A Child's Garden Of Turf

Well, the final week of the NFL regular season concludes tomorrow and what more opportune time to explore an obscure Bazooka package design set called A Children's Guide To TV Football.  Issued in 1971, presumably due to the launch of Monday Night Football the season prior, ACGTTF represented a new direction of sorts for Topps after they killed off the printing of baseball cards on the back of Bazooka party boxes and fumbled an attempted football card set thereon, all in 1971.

There were 12 box backs created, some primarily text-based:

That's pretty basic, even for this period at Topps, where they were gearing up for their March 1972 IPO. That first public offering of their stock had been preceded by a massive consolidation of their various family business and co-ventures, among other costs saving moves and I suspect this set was part of the associated belt tightening. Here's the commodity code:

I had originally thought this set came out after the 1971 Bazooka Football cards but that set's box has the same commodity code, which is....interesting: 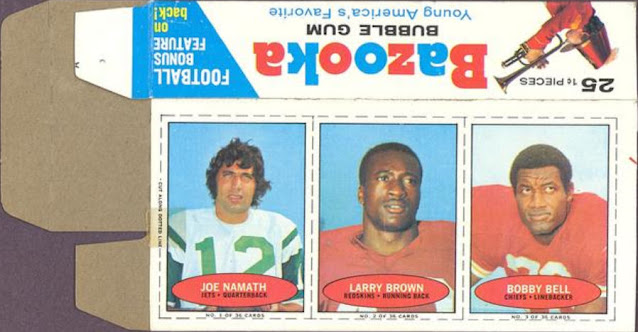 The front of the box allowed for either option:

Compare this to the 1971 Baseball box and back:

I'm not sure what the -02 box looked like but note this is the year Topps had planned a 48 card Baseball set for Bazooka, then pared it down to 36 subjects.  There's no box associated with the longer set but it's entirely possible I'm missing an interim one that was prepared but never deployed.
ACGTTF is really hard to find so my question is, did Topps also plan to issue the Children's Guide initially then pull back and go with a traditional football set? Or were they just not considered worth saving, being so esoteric?  Both? Neither?
Here's another:

I have not been able to find all 12 subjects and the checklist I have so far is sparse and represents only the above three specimens:

You will note the set derives from a Grosset & Dunlap book (published in 1967) called Football Lingo, written by Zander Hollander and Paul Zimmerman, with illustrations by Jerry Schlamp. Hollander wrote 8-10 sports related books a year, many of them annual paperback guides in his Complete Handbook series and if you are a certain age you may recall them being offered by Scholastic. Hollander also wrote for Howard Cosell when the nasally one received his first big broadcasting break and that connection to Monday Night Football is an intriguing one in light of this set.

But Schlamp is our link here as his illustrations look to be adorning the Officials' Signal box but not necessarily the Officials' Duties box. I base this upon the similar Basketball Lingo book cover art and you can see why as the ref on the latter looks a lot like those officials on No. 12: 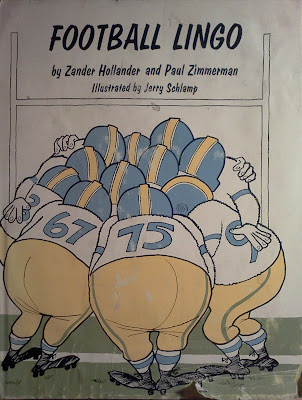 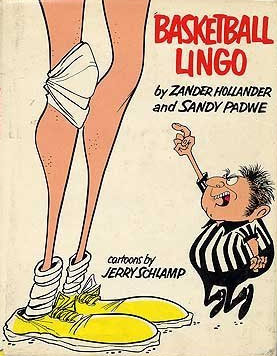 There is a Baseball Lingo book as well, of course; check out the look of the ballplayers: 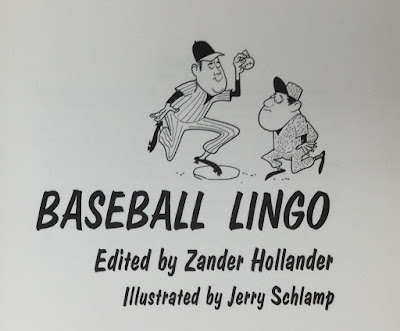 I've only seen multiples of the Football Lingo Bazooka box and wonder, after considering all of this, if this was a set designed on spec and then rejected by Grosset & Dunlap?  It certainly could have been a failed test as well but the sharing of the commodity code with the 1971 Bazooka Football set makes me think it's possibly the former. Topps was not shy about getting rejected products out into the world, it just took a little time and stealth.
I know at least one full set exists, thanks to a recent auction (which I missed, curses!) but the lot description only showed the box fronts for some reason. Hopefully one of our readers won the lot and can advise accordingly.
Posted by toppcat at 8:00 AM