I receive a few e-mails and messages every week concerning what is posted here, all of which are complimentary and courteous, which I appreciate greatly. Most communication seems to lead to new discoveries or re-examination of prior posts or accepted hobby wisdom but some are just everyday inquiries. So when intrepid reader Lance K. sent me a note asking about a checklist discrepancy in the 1965 Topps Hot Iron Transfers, I thought there was nothing new to learn about this set and I'd just send along a link to a listing somewhere. Wrong!

The Hot Iron Transfers were thin, fragile paper inserts with a player portrait meant to be ironed onto a T-shirt by your Mom in 1965. They were inserted in Topps mid-series nickel wax packs (and probably cello as well) that year, following the run of Embossed cards that came with the first couple of series. There are 72 Transfers in the set and as you will see below, they are really just simple line drawings with a team block atop and a name block below the portrait, either in blue or red. Colors alternate between the leagues, unlike the embossed cards which follow a strict Blue for AL, Red for NL pattern.

I'll have a quick post on the Embossed cards someday but for now will show how they were first presented to those crazy kids in '65, with some nicked scans for Ebay: 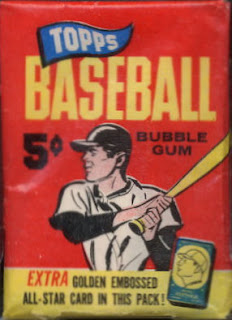 A couple of series' later, Topps just changed the bottom banner for the Hot Iron Transfers:

At this point I have written pretty much all that I thought could be written about the Transfers but then Lance started off his e-mail by stating:

From what I've found online, there are 72 total in the set, with 24 each released in the three series that year.

Easy enough to answer, right? I check my sources and they reveal no details on series distribution. A quick Ebay search then shows they definitely came in the 4th and 5th series packs, while the Embossed cards have been seen with 1st and 2nd series packs. Not knowing what came in the 3rd series, which doesn't matter much anyway since Topps blended their series' as they were issued, it certainly seems plausible the Transfers could have come out 24 at a clip. I'll have to defer judgement on that due to lack of current evidence but I had merely assumed they all came out at once. It makes sense Topps would stagger the release of their inserts though, avoiding constant repetition in order to let the kiddies find new faces would be a good marketing move.

So now I move on to Lance's second comment:

According to a few checklists I've found, including Beckett, there are two Dean Chance transfers, numbered 10 and 42. Unfortunately there don't seem to be any scans listed as #42 anywhere. I've picked up a couple of #10 over the years, and they appear to be identical to every scan I've found online. I'm at the point where I'm wondering if 42 really exists.

OK, this was a new one on me. It's forty plus years since this set was issued, there's a zillion price guides and checklists available and there is confusion over a Dean Chance insert? Piffle, I thought. Well, not wanting to be a blatherskite, I decided to check my one of my earlier Beckett/Sport Americana Guides (my trusty 3rd edition, if you are wondering, as I know you are) as it is much svelter than the big Almanac and decidely easier on my aging peepers. No listing for the set, althought the Embossed cards are shown. I check back to the first issued guide, then forward through #6 but nothin' doing. I spy another tome on my reference shelf and pull it out: 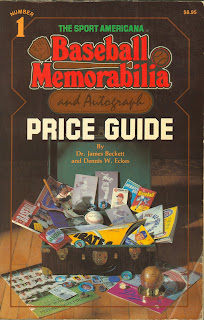 An esoteric book to be sure, this came out in 1982 and was the source of much information for me on Topps oddball sets prior to the explosion of price guides and the internet. Sure enough, there is a listing for the Transfers but it was a player short. It showed these entries for Chance:

Now, the Transfers are not numbered, that's just a price guide maneuver to make things easier to discuss but I think you will agree the first listing is imprecise. So I drag out my binderful o' oddball and find both Dean and Bob (he of the B. in the guide). Here, see for yourself: 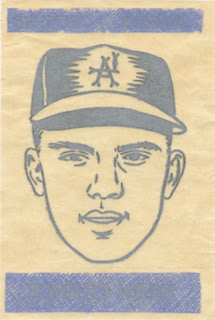 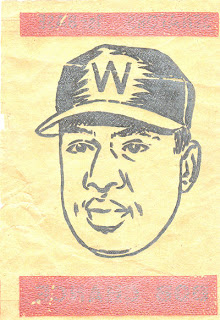 Going back to the listing, I note that Beckett and Eckes were looking for information on the 72nd card. Furthermore, the listing seems to cover the blue Transfers first, then the reds, so Dean at #10 makes a lot of sense and we already know it's ol' Bob at #41. So at some point the final Transfer was discovered and added to the list somewhere between Dean and Bob, bumping Bob to #42.

From what Lance says, some checklists still are incorrect to this day, including Beckett's which would have been derived from the Sport Americana list. Well, Topps inserts are not really the focus of many collectors and I have to say the Transfers are not all that easy to find but it's a little surpising information on this set is still in error in some quarters. Well, that's why I write this blog.

Here's how to apply the Transfers, in case you were curious: 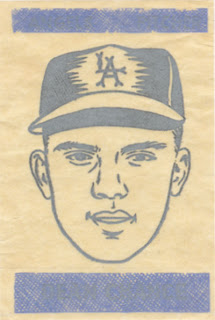 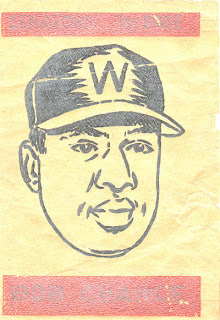 I really can't see too many kids doing this, can you?
Posted by toppcat at 7:45 AM

Thanks again for looking into the Great Transfer Mystery!

Now that I think about it, one of my Chances is in pretty bad shape. You've given me the urge to find something I can iron it on to. Perhaps the brim of my LA Angels hat...

yeah, I've got a complete list of these.. Bob Chance is #15 and Dean Chance is #16 (they are listed alphabetically)