If you have been following the comments about my last post, there is a bit of friendly debate going on concerning packaging of the '66 Punchboards and tangentially the 67's. While I will get to a review of 1967 set and its intricacies soon, I figured it would be easier to jump the gun and show what scans I have nicked along the way of the 67's packaging. There will be some updates on the 66's as well, so consider this a "catch up" thread.

And here is a picture of what I presume to be the '67 wax box, even though it a reproduction: 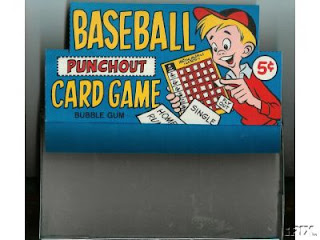 Now the box says a nickel and clearly shows a '67 card. My 2nd edition of Mark Murphy's Unopened Pack guide states that the wax pack sold for a dime and held three cards, so something is either amiss or Topps used two price points for the '67 wax. If anyone has a scan of the '67 wax wrapper, send it along and I'll update this thread.

UPDATE: Rob Lifson's response as to what the '66 wrapper looked like:

"Incredibly it was a normal standard fully-printed wrapper - not a blank white wax wrapper with a sticker - I always thought this was amazing because with this style of printing they must have printed many, yet all I ever saw was the one. I had the top of the box also, which as I recall also pictured the same Mantle card."

"I'm not sure I fully answered your question: It certainly was not a cello wrapper, but I'm not 100% sure it qualifies as a "wax" wrapper though it may - It was printed on a strong paper stock. I remember that the wrapper appeared to have been "sealed" with a piece of tape on the reverse - sort of like someone had actually just taped the pack shut by hand. "

We'll see what else turns up.

UPDATE 3: I have been advised by an advanced Topps collector that at least five of the '66 Punchboards are known with blank backs. I am not certain if the 14 I have shown previously all have printed backs or not, so stay tuned as I await details from both fronts.

UPDATE 4: Friend o' the Archive John Moran just sent me a scan of an annotated '67 box proof. The dating is March 7, 1967 and it was from the Topps vault (click to enlarge). The handwritten Phoney Records reference is intriguing. Goodness! 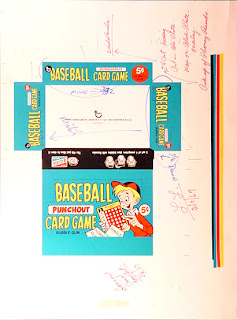