Oh, the twists and turns this blog takes!  Today we enter the world of fashion and supermodels for no good reason at all, excepting a post I have been working on is not yet ready and I am about to debark on a short journey with Mrs Archives and don't want to leave without a quick look at something esoteric.

Esoteric in this case is a very strange set called Twiggy, which is named after the supermodel that just about started the waifish, heroin-chic look of the late 60's.  The set is quite scarce and it is believed to either have failed a marketing test (possibly twice) or been withdrawn just before distribution was to occur.  The cards are black and white and measure 3 1/8" x 4 3/8" and have nothing on their backs at all: 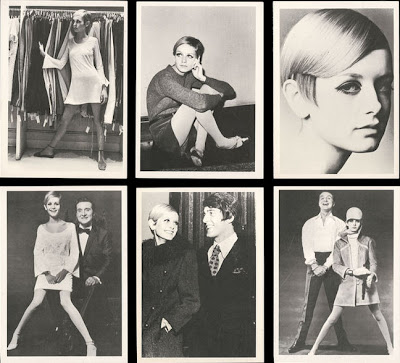 The wrapper looks like a test version cello, with no gum included, nor even a mention of Topps: 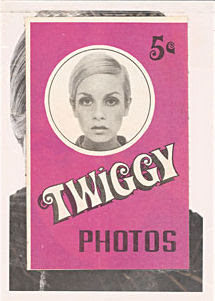 The clear cello back shows the whiter-than-white reverse: Twiggy is thought to consist of 34 cards, primarily on the basis of this uncut proof sheet, which has two duplicate pictures (and is a little hard to see).  If the columns were lettered and the rows numbered like a spreadsheet, then I1 and C3 are the same as are I2 and D4: 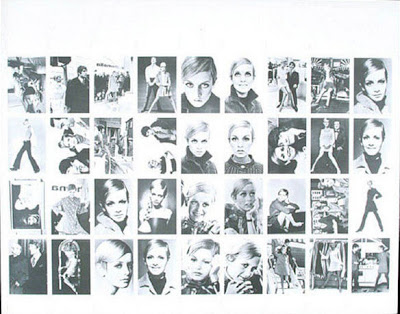 Is that the full set?  I think it possible as Topps would often proof only the basic rows that would appear on the final production sheet without regard for any that might reoccur above or below.  There are no partial cards along the borders so this very well may be the array.
The box is intriguing for a number of reasons.  Here, take a look and see what you can observe: 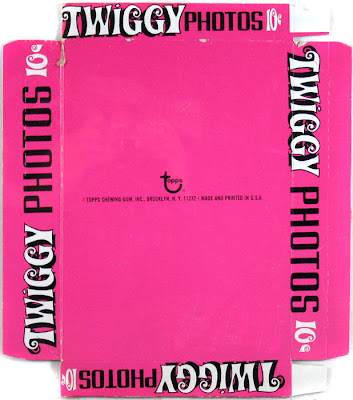 The most obvious thing, other than the hot pink color, is that the box has a ten cent price point while the wrapper shown above only sold for a nickel.  It would seem likely then that the ten cent test failed and the cards were repackaged at a lower price.  That test either failed as well or the cards never hit the streets; a distinct possibility as most if not all known extant cards are from either Topps internal files or were sold by employees of the firm at a later date.
The box also helps with dating in two ways.  The Topps logo shown on what would be the box bottom is the newer style that debuted with the move of gum production and product packaging to Duryea, PA in the late winter and early spring of 1966.  The other clue is the lack of a production code, an internal reference added beginning in 1967 to each new product.  Since Twiggy really got hot in 1966 and there is no production code shown on the packaging, I estimate 1966 as the date of the set.
The Twiggy phenomenon was brief and bright, although she stopped modeling in 1970 of her own accord.  You can see some other materials and merchandise here to get an idea of how big a deal she was in the go-go 60's.
Posted by toppcat at 1:01 PM