One of the more terrifically tough Topps test issues is 1966's Flipper. Produced in black & white, Flipper was an extremely limited test or in house "pitch" issue that never saw a retail shelf.  While the TV show it was taken from ran from 1964-67 the cards are easy to date at 1966, thanks to a copyright line on the back.  I took a quick look at the set here in connection with a bunch of similar sets of the same era and don't really plan to address it today except in reference to another issue.

Another Flipper issue exists, called Flipper's Magic Fish and it is a real oddity. The box carries the same copyright line (1966 Ivan Tors Films, Inc.) Tors was a Hungarian director who was a bit ahead of his time and responsible for movies and TV shows alike; Daktari being one of his more well know productions.  MGM also gets a credit but the 1966 Tors ID is the thing that dates the issue.  The box does not mention Topps for some reason but the strangest thing of all is the two cent price tag.  I can't recall any other Topps sets at that price point. 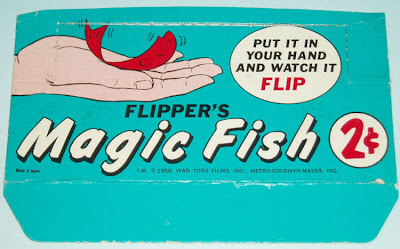 Each fish would curl up in your hand when held long enough and there is even some detail to each of the ten fishes depicted:

That's a paper wrapper and the reverse is what tells us it's a Topps issue (O-Pee-Chee in Canada):

As you can see, the fish were made in Japan and thanks to the the wrapper reverse we have a complete set checklist.  My feeling is that this bizarre set was meant to be an insert with the Flipper cards and when that set was abandoned Topps made the best of a bad situation and isseud the Magic Fish on their own.  These are hard to find as well and I missed the auction these scans were taken from.  I think I can even hear Flipper mocking me with that high pitched laugh as I type this....
Posted by toppcat at 7:05 PM

Doesn't look like it was worth any more than two cents to me. Seems like you'd rather have two baseball cards anyway. Weird stuff!

There's a pretty decent seafood spot in NYC called The Mermaid Inn and they give you a complimentary dessert along with a Fortune Telling Miracle Fish. It would be cool if the used the Topps fish.