In the last of my not-very-exhaustive look at Topps Hopalong Cassidy cards, I thought it would be fun to show what the foil cards actually look like as very few collectors have seen one, let alone all eight.  So without further ado, here's an 8 pack of  Hoppy, swiped from a Huggins & Scott auction from a way's back: 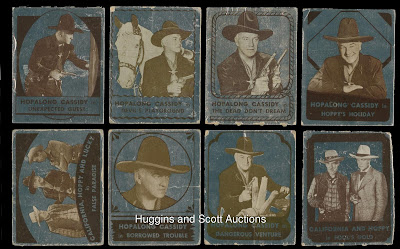 The foil cards may have been produced from a new material manufactured by Milprint, Milwaukee Printing, a key partner of Topps in the early days. They are quite susceptible to damage and prized today.  The backs show the original eight "episodes" of Hoppy issued by Topps (two additional ones would be added at the end of the run without the foil headers). 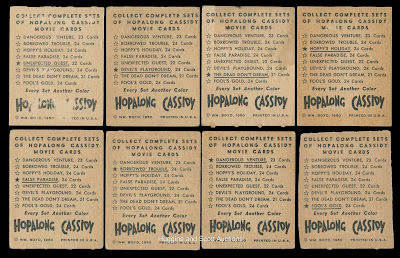 The inclusion of all eight episodes at once seems to indicate Hoppy was issued in one big series but I suspect there were two runs, slightly separated and including the second series on the checklist would have been a great way to sell more cards.
I think we'll let ol' Hop ride off into the sunset now......
Posted by toppcat at 8:04 PM