OK, it is a pretty rare event but every once in a while something new (well, old but new to me) pops up that I can honestly say I have never seen before in the universe of vintage Topps issues.  This happened to me last week with an issue called Pocket Size Baseball Game: 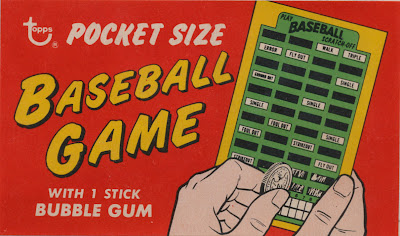 Now, I have been aware of the existence of this product since 1985 when an old Baseball Card News wrapper checklist listed it.  I had just never seen one before.  I had incorrectly surmised that the product inside was a 1970-71 Baseball Scratch Off.  I was utterly off base as it turns out.  Then based upon a scan of the back of the pack I thought it might contain something much like the 1974-75 Basketball, Hockey and Football Scratch Off games, although I could tell its design varied a little from that trio's.  Wrong again. Instead, I opened up a pack (I bought three) and found this staring at me: 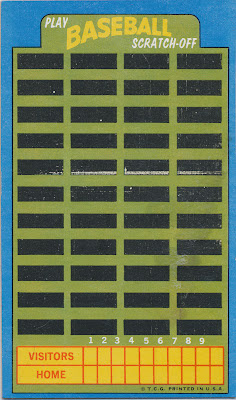 The card itself is larger than either those mid 70's game cards or the original inserts, all of which are standard sized.  This behemoth measures 5 1/4" x 3 1/8",  a size also used for the 1970-71 Supers and 1976-77 Basketball cards and is on the same type of stock used for the regular baseball cards of the time.  I think this issue dates to an earlier time than the big basketball cards, likely 1970-72. The letters spelling out baseball are replicated on the reverse but in a more "mod" style, reminiscent of the team lettering on the '72 baseball cards and that may be the only way to roughly  pinpoint the date.  If forced to choose, I would go with 1972 but that is just a best guess. The back offers another clue to support my time frame estimation: 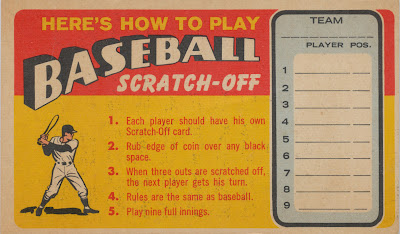 It''s undated but the instructions on how to play the game are exactly the same as those found on the 1970-71 inserts, down to the spacing of the words and lines.  Therefore, it seems it must have been created at a time when the artwork for those inserts was still fresh.  The pack contained two cards and some gum.  The other card in this pack was off center but features a blue themed reverse.  In fact, all three packs showed blue through the back, leading me to believe red and blue are probably the only two colors used on the reverses. Both fronts were blue by the way-not sure if that carries through as I am not opening another pack.  Here is the blue reverse, off center and almost miscut: 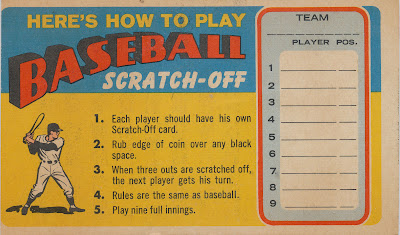 Perhaps an NL/AL color scheme was occurring. I had surmised that the pack would be a test pack and indeed it turned out that way: 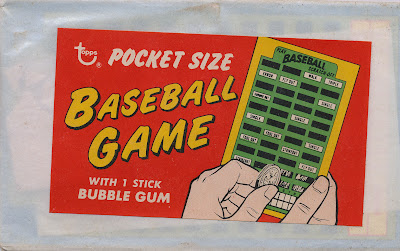 The pack back offers no clues, even though the small traditional Topps test style ingredient and manufacturing sticker that is attached: 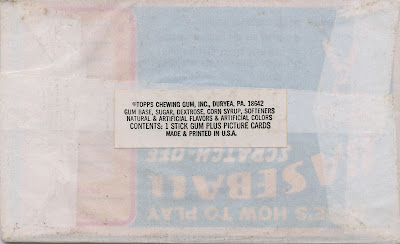 The sticker conceals some glue that was still holding the pack together quite well even at this late date. Here's a hint: use a business card to gently separate glued packs when opening them. Slide it between the layers and slowly work through the glue, stopping if you encounter any real resistance. If it doesn't open easily just attack from a different angle or spot in the same gentle manner and the flaps will eventually work apart from the main body of the wrapper without tearing anything.

I tossed the gum, which was staining the pack but kept the little insert that kept it away from the cards. 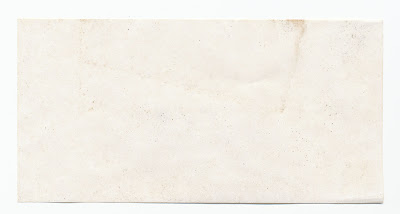 I actually measured it out to 4 3/4" x 2 1/2" although the gum was smaller and looked to be about the same size as the gum I remember as a kid.

So the set has been added to the master Topps checklist I keep; now if only the date and full array of color schemes could be confirmed, we'd be all set! Still, I think this to be a pretty neat item.
Posted by toppcat at 7:02 PM

How tempting was/is it to scratch one off?

Not tempting at all. I tried that a couple of years ago with a beater 70 scratch off and the black bars had basically fused with the cardboard at that point. I think though, looking at the older, 1950 license plate cards with the original style silver scratch off material, that those might still scratch properly.