Well, we're on our to the next 1,000 posts here kids!  Recently I acquired a batch of hobby publications that included some issues of the annual Card Collectors Company  Price List that I was lacking. Eighty or Ninety percent or so of each catalog would regurgitate the last version, some newer stuff would work its way in and a rotation of certain other things would be offered.  Occasionally though, some interesting overstock would be offered.  Take a look at the January 15, 1971 list: 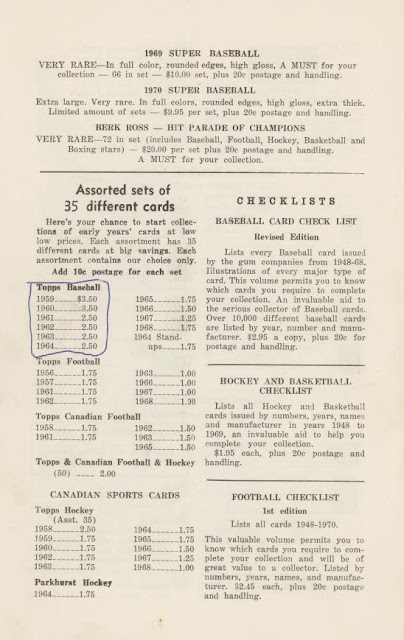 I don't have the 1970 edition yet so I can't tell if 1969 Topps Super Baseball was offered but I suspect it was as there was an alleged massive overstock and barrage of returns on the item.  Later, a large chunk of whatever CCC held of this release was famously burned up or singed in their 1975 warehouse fire and realistically, the "rarity" of the set and 1970's larger version was being overstated here.  And dig these Berk-Ross prices (that's their 1951 set) compared to the 1969 Supers-there's been a massive reversal of fortune and interest there, eh?
The January 15, 1972 Price List saw a massive expansion of these "miscellaneous issues" and tellingly there are no 1971 Supers offered, while 1969 and 1970 remain in stock despite their "rarity": 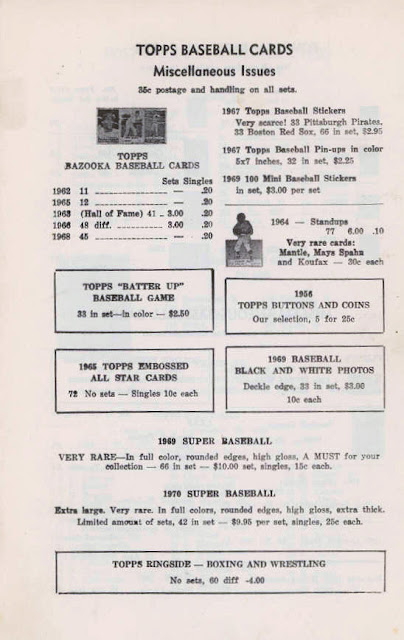 The Bazooka cards would pop up in these lists occasionally, likely as Woody Gelman or Topps uncovered more somewhere in their respectively vast inventories. Too, it's worth noting they ran regular ads in the Sporting News, Boys Life and some hobby publications like The Trader Speaks, where they would offer various, newly-uncovered goodies, especially in the latter, which once offered the three pulled-from-production 1951 Topps Major League All Stars at auction.
Back to 1972, there are some scarcer offerings here, namely in the upper right corner.  There you get both 33 Sticker sets of the Red Sox and Pirates for under three bucks combined-certainly indicating the test of these failed.  Those 1967 Pin-Ups would be offered for years, it's kind of curious why there was so much overstock on those as you would think Topps would know hoe many were needed to insert in the packs. But take a gander at the 1969 Mini Baseball Stickers, which are a tough issue to find nowadays. I'll take all you have at $3 a throw please! Ringside at that price, even for random lots of 60, were also a good deal at four bucks.
The rest of the offerings are older inserts that mirror the 1967 Pin-Ups and beg the question of why there was so much overstock available.  One interesting offering though, are the 1968 Game cards (Batter-Up), which may be the boxed set version (and may be why so many have the retail price blotted out on the box).
The January 15, 1973 Price List (the latest one I currently have) was offering items that are still tough today. A full set of 1971 Topps Greatest Moments for $19.95 was a steal even then due to the 22 short prints within. And 1964 Topps Stand-Ups at six bucks for the set?  What a deal! The 1967 and 1969 Stickers were still available and Ringside was right-sized to a lot of 25 for the same price as a year earlier. 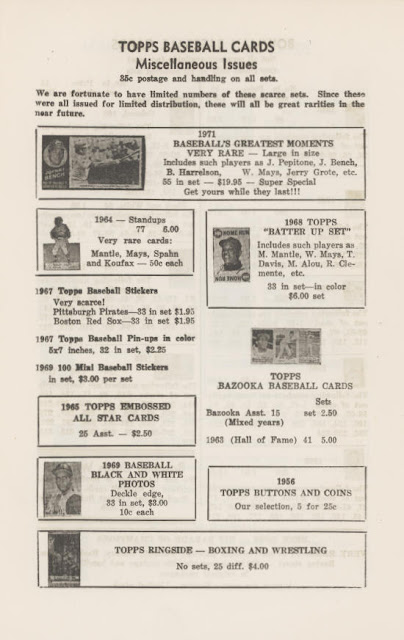 As for those 1956 Baseball Buttons (not sure what the coins are from that year, maybe they had the pins removed?), Sam Rosen (Woody Gelman's Step-Father, who ran the proto-CCC), had ya covered back in the day (1958 actually):