Following last weeks' peek at the 1969 Decals,  today I'll be looking at the 1969 Topps Baseball Mini Stickers, more commonly known as 4 on 1 Stickers.

Topps was pretty big on putting a "quad" of stickers on a card back in the 60's and early 70's, especially on the non-sports side. For some reason they decided to test a baseball themed mini sticker set in 1969, taking images from the 2nd series press sheet used for the regular issue. Perhaps Woody Gelman just liked the card design for '69! As an aside, the Football stamp stickers Topps issued in 1969, which had to be moistened to put into a mini album, are referred to as 4 in 1 Stickers. This makes me think it was more expensive to use true sticker stock but I digress.... 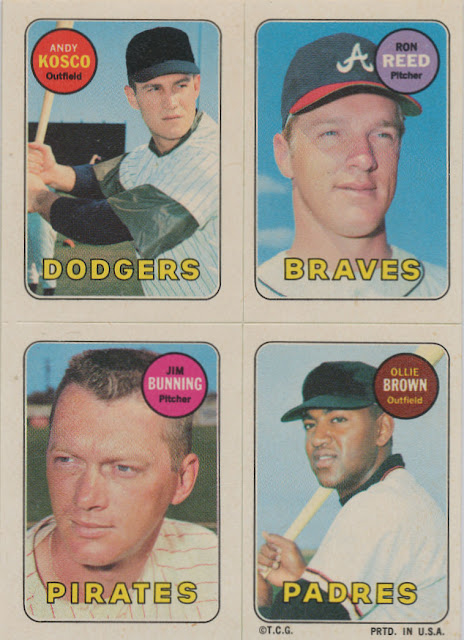 In addition to the old standby of capless photos, Topps really broke out the airbrush in '69.  Kosco had come over to the Dodgers from the Yankees and Ollie Brown was, of course, selected in the expansion draft by the Padres (from the Giants) and had the honor of being the first player selected in MLB's third such crapshoot. Jim Bunning came over after the 1967 season from the Phillies to the Pirates and given his Philly duds, I would say Topps just didn't have a current picture of him.

As Friend o'the Archive Keith Olbermann recently pointed out to me, Topps was facing a Major League Baseball Players Association boycott in 1967-68 and only a handful of new pictures were taken during that time.  Dexter Press and few other issuers tried to take advantage of this interregnum but the MLBPA worked out their differences with Topps after increased royalties were obtained for the players. They did start taking a lot of new photos in spring training in 1969 as a lot of tired old shots had been rehashed ad nauseum over the previous years.

Ron Reed was happily ensconced in Atlanta at the time, although he had been a player with the Detroit Pistons in the NBA  a couple of years prior. In addition to being one of a dozen MLB players who also played in the NBA/NBL, he played alongside former White Sox pitcher Dave DeBusschere while in Detroit and, in fact, was also coached by Double D, who was Pistons head coach from 1964-67!  In addition to dying on my 15th wedding anniversary, DeBusschere was also having a drink with an acquaintance of mine on the day he passed.  Anyhoo...

Topps indicia adorns the lower right card sticker of each quad, so 25 of these babies have such markings. The back is just a shade off true white: 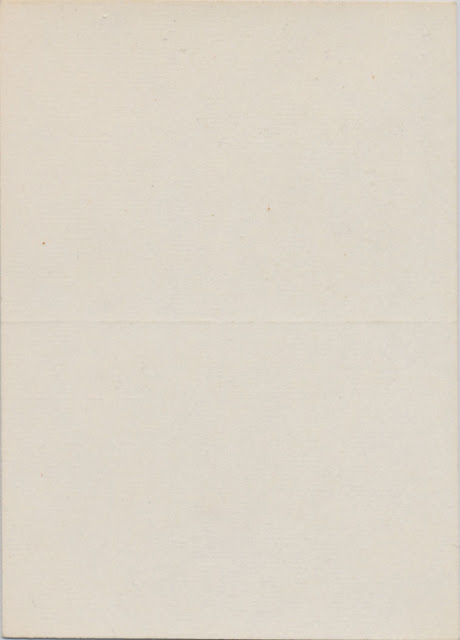 Looks like the horizontal score line had a bit more oomph behind it during manufacture as you can't see the vertical companion.

I'll get into the teams and composition of the set momentarily, but one interesting variation from the regular issue Baseball set surfaces and gives us a window into the production timeline.

Clayton Dalrymple, shown with the Phillies in this set, while he has a team variation in the main set, having been traded from the Phillies to the Orioles on January 20, 1969. Here's the progression: 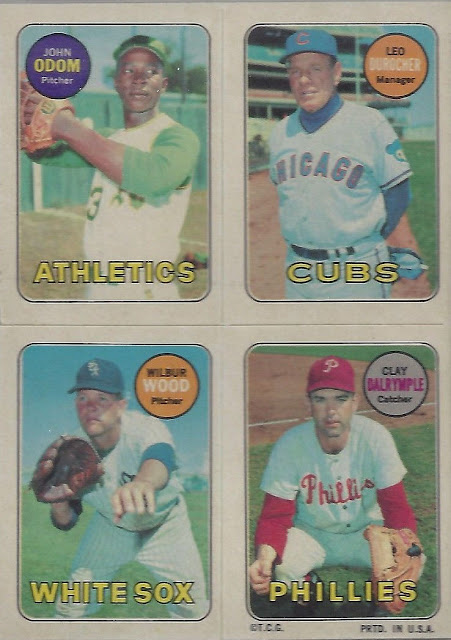 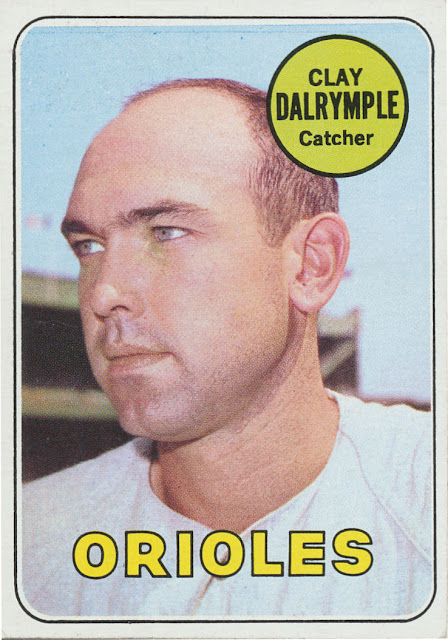 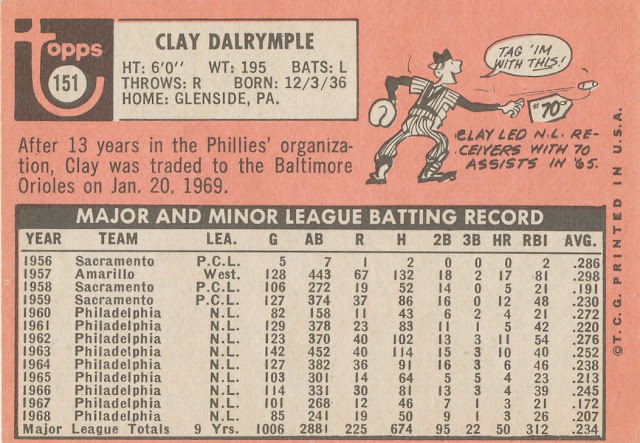 So at what point did Topps make him an Oriole?  We saw last time out that the Decals were composed sometime between 12/12/68 and 1/22/69 and the Mini Stickers fall into the same rough time frame. Once again Donn Clendenon helps with the dating. Remember he went through a crazy period where, as Wikipedia tells us:

"With first base prospect Al Oliver waiting in the wings, the Pirates left Clendenon unprotected for the 1968 Major League Baseball expansion draft, and he was selected by the Montreal Expos. On January 22, 1969, the Expos traded Clendenon and Jesús Alou to the Houston Astros for Rusty Staub. The Astros had recently hired Clendenon's former Pirates manager, Harry Walker, with whom Clendenon had a personality clash, to steer their club. Clendenon refused to report to his new team.
The Expos and Astros worked out a new deal, and Clendenon joined the Expos on April 19, 1969."

He's an Expo in the 4 on 1's It's easy to pinpoint the bookend dates for the Mini Stickers then. They couldn't have been approved for final design before October 14, 1968 (the day Clendenon was selected by the Expos from Pittsburgh) or after January 20, 1969 when Clay Dalrymple became an Oriole. Clendenon's regular issue card with the Expos shown also goes for about ten times the Houston version, while Dalrymple has many more Orioles cards available so the first regular issue print run was altered and subsequent runs had the majority of both player's cards with their new teams. I think it's good bet then that the Mini Stickers were printed just after the first run of the second series was composed.
A color process proof of the Mini Stickers exists and was auctioned for a song by REA a little while back: 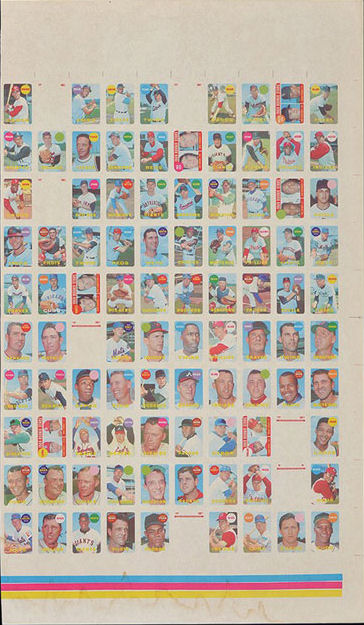 These were taken from the "A" sheet, or left side of a 264 master uncut series 2 sheet, as iPhoned by Friend o'the Archive Anthony Nex; Clendenon as an Expo is third card in on rows 1 and 9, while Dalrymple is eight cards over on the 6th row: 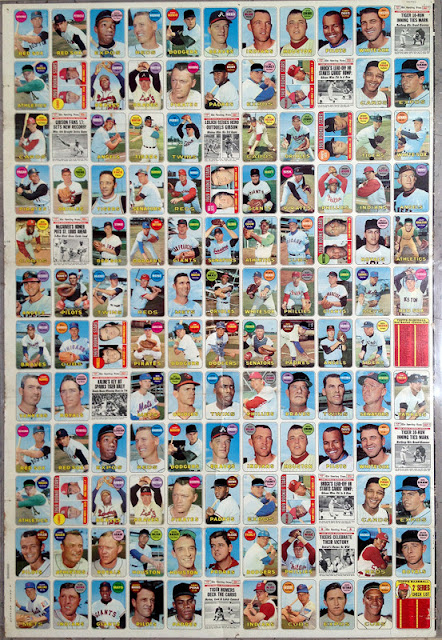 You can clearly see how the top two rows of the regular press sheet are double printed and reappear near the bottom.  The rightmost column was excised for the Mini Stickers, which saved Topps from having checklists appear in the set but truncated the World Series subset by one subject in sticker form.  In fact, where else can you find a checklist of the cards NOT replicated as stickers?  Witness:
107  2nd Series Checklist
155  Pete Ward (White Sox)
167  World Series Game 6
172  Jerry Stephenson (Red Sox)
182  Bill Rigney (Angels)
183  Don Shaw (Expos)
211  Galen Cisco (Royals)
212  Tom Tresh (Yankees)
214  3rd Series Checklist
217  John Donaldson (Athletics)

Here's the "B" Sheet, from an old Huggins & Scott auction: 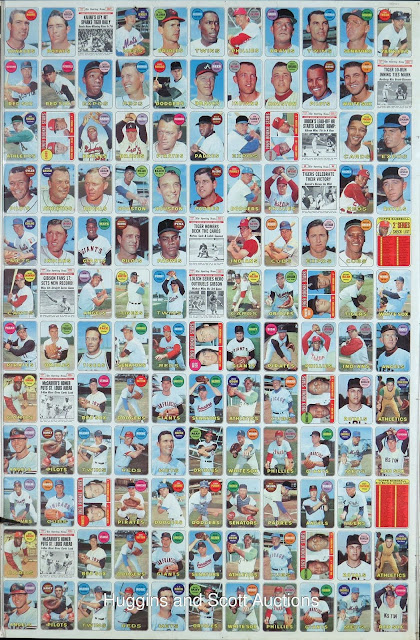 You can see how Topps sliced and diced the rows when compared to the "A" sheet.  That's how they rolled back then! If you count from the top down, the 8th and 9th rows, which are replicated as the 11th and 12th rows, are all extra prints, appearing three times over the two half sheets.
As with the 1969 Decals, I'll give you a checklist ordered by team.  Note all the of the designated rookie cards have two players apiece but I've shown each player individually:
EDIT 4/17/16: A further tip of the cap to Keith Olbermann, who pointed put the first version of this post had Dalrymple shown with the wrong team on the Mini Stickers. His catch has helped tighten up this post considerably.
Posted by toppcat at 8:00 AM

Very informative. As a Redsox collector these have been tough to come by