1967 was the year that Topps really started pouring it on. Whether it was due to their purchase of Fleer's baseball player contracts the year earlier or having run through a full production cycle at their new Duryea, PA plant, baseball related sets or planned sets were numerous in the Summer of Love. They also started heavy experimentation with the medium of the product itself across all lines of cards.

But back to baseball. The regular issue cards from '67 are quite well done and it is an extremely popular set to collect. The All Star Pinup poster inserts are attractive, albeit printed on cheap stock, and there were a ton of supplemental sets and even a couple of attempts to market on a local basis. I count the following sets or attempts in 1967 (*= proof or test issue):

Also in the mix were four players in the Who Am I? set and a Babe Ruth Comic Book Foldee appearance. There is also the matter of the mysterious Roberto Clemente Poster Sticker. Whew! Today though, let's briefly focus on the two sticker sets.

Now most collectors are familiar with the Pirates and Red Sox Stickers. Consisting of 33 stickers each, these were intended to be sold in Pittsburgh and Boston, almost certainly as a test to see if there was interest in locally focused sets. The stickers are quite well done, standard sized and printed on sturdy stock, Here's a Red Sox Sticker: 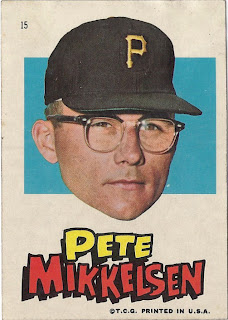 And so nobody gets hoodwinked on Ebay, this is how the backs look, with their brown paper backs, slit about 60% of the way down: 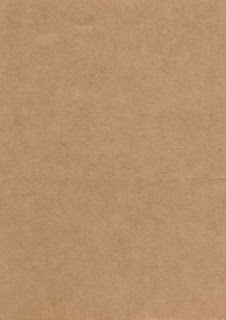 While not common, since I suspect leftover stickers were sold through the Card Collector's Company, the stickers are getting a bit tougher to find these days, like many mid 60's Topps small sets and inserts. Don't get me wrong, these still are out there but they exist in reasonably small numbers compared to the regular baseball cards.

The stickers came three for a nickel and were sold in normal wax, not white test, wrappers (which may not yet have existed): 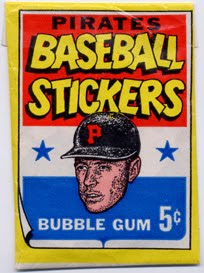 (From the collection of Bob Fisk)

I have a wavy scan of the Red Sox box (side view) from Net54baseball.com: 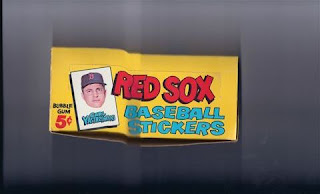 I would like to get some more box scans up but they are scarce, with the wrappers not too far behind.

The Stickers featured either 24 players and coaches (Pirates) or 26 (Red Sox) and then rounded out their numbers with some logo, slogan and fun cards, which I will get into next time for reasons that will be made apparent. Sorry to be a tease!
Posted by toppcat at 7:57 AM

So anyways, I just gave your blog a solid read-over and love it. I just wish I would've found it before the domain was bought and developed.

I just thought I'd leave a little comment and a half-assed apology.

Howdy-shoot me an e-mail when you get a chance-I think peaceful co-existence and a link exchange is possible!