I thought it would be appropriate on the 9th anniversary of Jean Shepherd's death, to show a very strange Topps item he likely inspired. Shep was a radio personality in Cincinnati and Philadelphia before hitting the Big Apple in the mid 1950's on WOR AM and FM and was later known for his books and the now de rigueur A Christmas Story. He became a media sensation in New York and is fondly remembered today by many Gothamites.

Shep had a huge following and was known for some off the wall stuff, including the nose flute serenade he used to play along with when commercial jingles ran. Topps, in one of their stranger moments, marketed a nose flute sometime after 1965 (the header card has a Duryea, PA address for Topps which would make it 1965 at the earliest.) I'm pretty sure Shep didn't actually have an instrument though, he literally used his nose!

This is among the oddest Topps products out there: 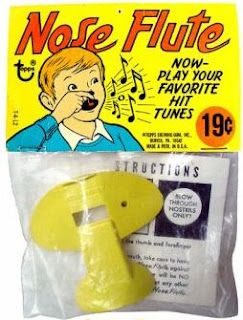 I knew about Shep through reading his books, which my parents had when I was growing up and I remember seeing his old PBS show a couple of times back in the day; I only got into his radio stuff a few years ago. You can find many old Shepherd radio programs on Ebay and I highly recommend them along with his books. You can find out about all things Shep here, and also listen to some shows if interested.

A Fathead is an affectionate term for a Shep fan! The title of today's post is taken from Gene Bergmann's excellent Shepherd biography.

(12:30 PM Update-A brass figlagee with bronze oak leaf cluster is awarded to Gene Bergmann, author of said tome, for alerting me to the fact Shep likely DID use an instrument when playing the nose flute. Ya learn something new everyday!) Seltzer Bottle!
Posted by toppcat at 7:23 AM

Thanks for describing my EXCELSIOR, YOU FATHEAD! THE ART AND ENIGMA OF JEAN SHEPHERD as excellent.
Regarding nose flutes, there have been many variations on this instrument in third world countries. The Topps one is the only design I'm aware of in the United States. I have no doubt that Jean Shepherd used a nose flute of just such a design when he concertized on the air. He also used the jews harp and the kazoo. He was a master performer on all these as well as in the unusual musicianship of thumping out tunes by knocking his knuckles on his head.
Excelsior!

Yes Jean Shepherd probably played a plastic "Humanatone" (distributed by Gretsch) at this time.
You can hear him playing it in 1965 program I put on my blog : http://nose-flute.blogspot.fr/2012/05/archive-jean-shepherd-and-nose-flute.html

By the way, I would be very interested of getting a bigger size of the nose flute shown on this page it it is possible...
--> contact(at)noseflute.org

OK, so Fred Gretsch was friends with the Shorin family that owned Topps from 1938 up until about 7 or 8 years ago. He sold Morris Shorin a house in Crown Heights in 1920 and leased a floor in the Gretsch Building at 60 Broadway in Brooklyn to Topps in 1938 (their first factory floor) which they rented until 1965-66.