Maybe it's because the regular 1968 baseball set was so drab or because some of them were still circulating in my neighborhood a year later (the first year I bought Topps cards) but for some reason the inserts and test issues from '68 have always grabbed my attention. From Discs to Action All Star Stickers to Game Cards to Plaks, it's my favorite year of Topps oddness. And there is no set I like better than the 1968 3-D cards.

Now the fact that I like them does not mean I have a stellar collection of them. I only have one, purchased in 2004 for a price I still can't believe, in an Ebay auction that everyone else apparently forgot to bid in. I thought at the time the Maloney was common (one version of it is) and that I had bought a kid-damaged card but as we shall see, it ain't necessarily so. Here is my Maloney (No Dugout background)-note the cloudy area by his throwing hand and the two vertical slash marks, or notches, on the lower left (likely "pull" marks from the production process), both of which we will revisit in a minute: 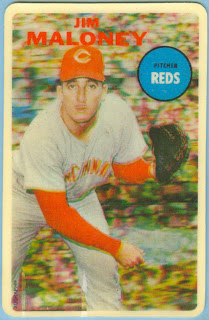 Every other scan is this article is not mine and I must confess I do not know the source for most as I have been tracking this set for a very long time and have hijacked many images along the way. Now, for some history first.

The '68 3D's are lenticular cards, which means they have an image that changes or moves depending upon the viewing angle. They use linier technology (linier is not a typo, it essentially means "wrinkled") to give the illusion of movement by printing a meld of finely interlaced images on the underside of a clear, ribbed plastic coating, and affixed to a backing image. The process was perfected by Vari-Vue Corporation in the 1940's and there are hundreds of examples of lenticular items available from their roughly twenty year heyday. The 1968 Topps 3D cards use a stereoscopic verson of this technology.

The available information is confusing but it seems Vari-Vue technology was at some point in the mid 60's licensed to Cowles Communications (Look Magazine) which somehow came up with a similar technology called Visual Panographics (also made into the name of a Cowles subsidiary) which seems to be more adaptable to wide field images. I bring all this up for a reason.


If you look closely at Maloney, alongside the leftmost "gash" you will see the word Xograph:

As it turns out, this is a trade name for a lithographed lenticular print made by Visual Panagraphics that identifies who produced the 3D cards for Topps. Xograph can also be identified as the producer of early Kellogg's cards. At some point in the mid 70's the Xograph notation on Kellogg's cards changed to Visual Panographics, in case you were wondering, and the company was later known as Optigraphics, which I believe produced Sportflics cards in the mid 80's.

Before you can print up a premium card set (and that's what these were intended to be) you first need to create a proof version. Only one of these is known and it looks like an upside down '67 Topps card in a way: 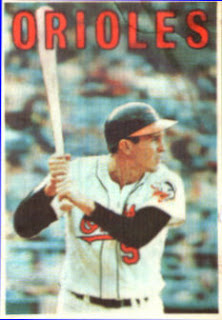 In a masterful article written for Sports Collectors Digest (March 23, 2007 - unfortunately not online) and followup on January 8, 2008, Keith Olbermann revealed a lot of previously unknown information about the 3D's, including the existence of a card showing a soccer player (from Napoli) described as similar to the Robinson but showing the name "Cane" in the upper left corner. This (I speculate) was likely a sales tool, created by Xograph/Visual Panographics to show lenticular technology to Topps executives and the image was probably taken from the Look magazine archives.

A number of proofs have shown up over the years. Here we see two uncut panels of nine cards each, including some mingled unissued players strangely missing any identifying information : 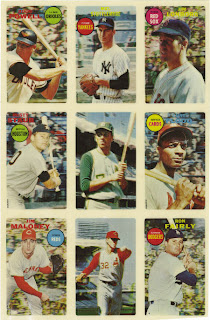 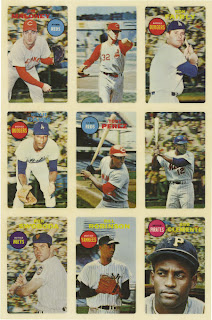 The three unissued players are Rick Monday and John O'Donoghue on the top panel and Tommy Davis with a different O'Donoghue on the bottom one. These are shown here with their rounded corners, indicating they almost made the final cut or perhaps were to have a back identifier (a common Topps trick at the time) instead of cluttering up the front: 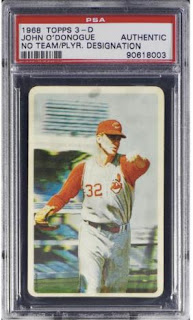 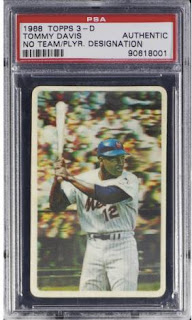 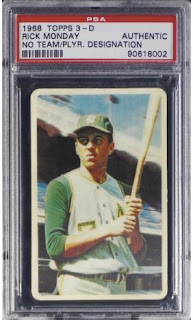 Square cornered proofs also exist, regrettably I do not have any scans of them except this Clemente: 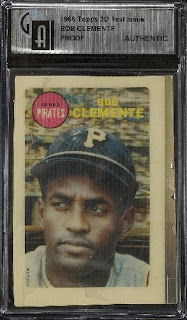 I am not sure if all square proofs are handcut like "Bob" is.

Before we proceed any further, here is the checklist of the twelve issued players: 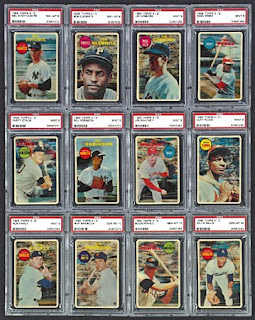 There is much, much more to it though. Early production pieces, almost certainly proofs, exist with a rubber stamp on back in either red or black ink: 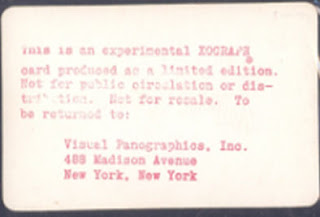 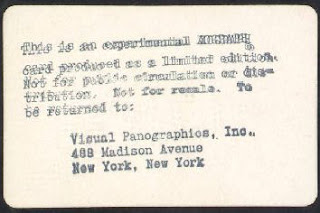 Fairly can be found with his hat either touching or not touching his last name above; Flood has a bald fan either in or removed from the background; Maloney features box seats or not (No Dugout which always seems to feature the two notches) and you can see on the above proof sheets both versions are present; Powell is either braining a fan or missing him with his bat, Willie Davis has or is missing the Xograph name and black around the team name circle and Staub has a clear or blurry background. All but Willie Davis seemingly come with each variety of backs (blank, red stamp, black stamp).

While the Olbermann article is missing the Perez cards in the checklist for some reason, it lists 53 different possible variations/combinations. (not counting the Brooks Robinson prototype). As his followup article on frontal variations does not include a mention of Perez but mentions the three different backs, I'm assuming there are at least four, if not six versions possible of Tony (there is a known variation with another player in background on either his left or right, then the blank back, red stamp, black stamp varieties, thereby bringing a master set to 57 or 59 cards depending on the Perez combinations, 60 if you count Brooks Robinson. That's a lot for a set with a mere dozen issued cards!

There are also some apparent short prints. Powell is widely recognized as the toughest, allegedly due to production problems, Staub is thought to be difficult, as are Flood and Stottlemyre and possibly the Maloney "No Dugout" variation, potentially pulled by Topps due to the notching. Recent sales figures indicate Perez may be scarcer than some others as well.

The cards came two to a pack (test version only it seems) with an insert: 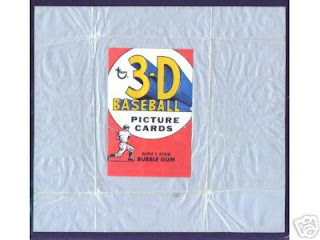 As for the insert, a Rob Lifson ad from January 31, 1986 lists for sale (along with a wrapper) an "unpunched stand up insert which came in each pack". I call this an easel but have never seen one and that Lifson ad is the only extant reference I can find. These cards were meant to be proudly displayed by their owners! UPDATE 11/1/08: The Easel has been located, see end of post.

There also allegedly exists a salesman's ring with a rounded picture of Sam McDowell (or more likely O'Donoghue) but I have no idea if that is real or not.

It appears the cards were only sold near Topps headquarters in Brooklyn. While a proof box exists, it is far from certain the packs were sold in it as the possibility is there that the cards were "sold off" instead of tested due to high production costs and quality control issues. 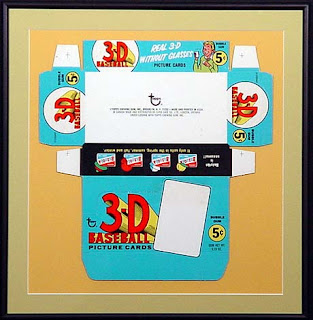 The box shows a five cent price but I have always labored under the impression a pack cost a dime.

I hate discussing prices but before you get any crazy ideas, most of these cards routinely sell for four figures, with Clemente easily in five figure range. If you want an example or two, shoot for the Bill Robinson, Maloney with dugout or Jim Lonborg in mid grade for high three figures. They are out there but a lot of collectors go after them, keeping prices sky high.

UPDATE 11/1/08-Rob Lifson was kind enough to send a scan of the easel: 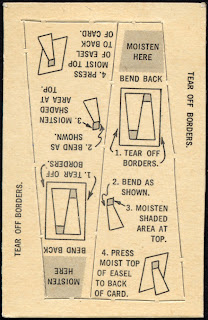 Thanks for posting so many pictures of this very attractive test issue. Its really a shame that Topps didn't roll this set out beyond the very limited test phase.