The American Card Catalog, which is responsible for giving us such nomenclature as T206 and E93, was compiled in a number of editions from the late 1930's until the early 1960's by Jefferson Burdick, with ample help from others, especially in later editions. Here's the cover of my well-worn copy, a 1980's reprint of an invaluable reference: 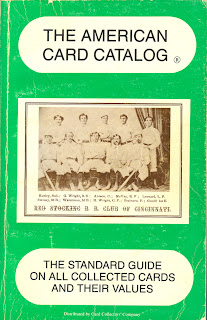 Topps cards have an "R" designation (for Candy and Gum Cards, the "R" may or may not stand for "recent") are are grouped in the "400" series of set identifiers, indicating a "Recent Candy and Gum Card" sports card set issued since 1948. Topps Baseball Issues are shown in the R414 grouping, their football cards as "R415" and Non Sport cards start appearing in the "700" series of "General Issues". Bowman's baseball issues would have their own set identifier (R406) as Burdick tried to corral a large number of manufacturers into manageable sub-groups.

So what, you may ask, was the first Topps baseball issue detailed in the ACC? It is none other than "Bazooka Baseball Cartoons by Mullin, 1949 2 x 2 7/8, wrappers" in Burdick's clipped description of the set. These are nothing more than Willard Mullin cartoons taken from a publication called Spalding Sports Show, which was a radio premium that had pages of Mullin cartoons and a few sporting goods ads within. These neat little publications appeared from the mid 40's until the early 50's and are quite inexpensive to collect. They all feature a stunning array of Mullin's artwork. As a footnote, I believe Babe Ruth was one of the early hosts of this show in 1945. 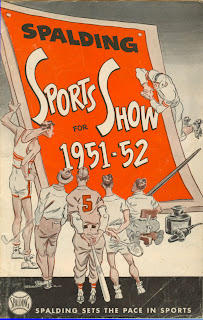 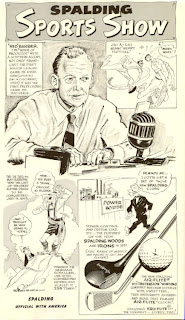 As they often did with the late 40's and early 50's Bazooka wrappers, Topps licensed artwork for their wrapper interiors. For R414-1 they licensed some of the baseball themed cartoons and printed them in sepia on the inside of 1 cent and 5 cent wrappers. Here is the inside and outside of the one cent variety: 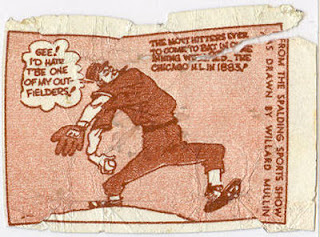 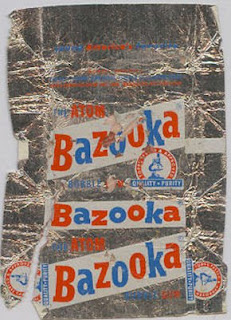 I am not 100% certain but I believe 25 of the Mullin cartoons graced Bazooka Wrappers in the days before Bazooka Joe. There is a little bit more info here on these wrappers.

I also stumbled across this offering from Columbia City Collectibles when researching this post, a Bazooka Joe comic topped with a promo for Roogie's Bump, a 1954 baseball fantasy with ads and posters featuring some killer Brooklyn Dodgers graphics. I have long followed Topp's oddball offerings but not necessarily all of the wonderful Bazooka items issued over the years. Looks like I'll have to bone up on this byway of Topps scholarship. 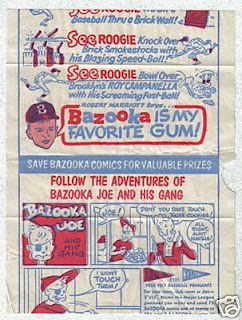