Topp of the (Christmas) Pops

Topps issued a couple of nice Christmas products early on. Before they did so however, they first sold a product that captured a big, big fad at the time.

Around 1950-51 Topps, remaining true to their origins as a confectioner, would market items that might be bought as a present for birthdays or Christmas. The first of these seems to be an item called Hoppy's Wagon Wheel Pops, commonly referred to today as Hoppy Pops:

These had a nice Hopalong Cassidy wrapper encircling each pop that somewhat resembled those from the Topps card issues that year, which were a monster hit with the kiddies as TV made Hoppy a gigantic, fad-driven star.

...and featured a bonus Santa Mask! The other had the visage of the most famous reindeer of them all: 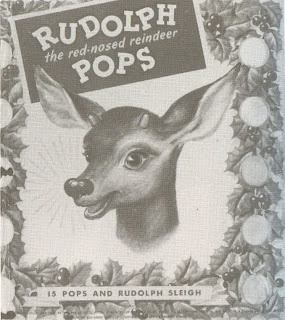 The back of Rudolph had a cardboard sleigh you could punch out and assemble, I guess so he could fly with it through the sky on Christmas Eve. This may also be from 1951 but the possibility is that the Christmas-themed products were sold over the period of 2 or 3 years. Presumably Santa and Rudolph had their own wrappers but it is not clear to me if they were generic or had graphics. It would be appropriate if the Rudolph Pops only came in red, don't you think?
Posted by toppcat at 8:44 AM