To Test, Perchance to Dream

Well, it has been a hectic holiday season here at the Topps Archives homestead....everyone is fast asleep, snug in their beds but I remain vigilant, thanks to an eggnog induced power nap this afternoon that left me refreshed and ready for action.

Just before Christmas I received a cache of old The Trader Speaks magazines in a trade. TTS was an important cog in the hobby machine from the late 60's through the end of the 70's. It survived into the mid 80's only to be absorbed via a mailing list purchase by Krause Publications and Sports Collectors Digest before briefly seeing the light of day again as an SCD insert in 1989. TTS was really a 'zine, a grass-roots collectors marketplace and trading post that served a growing hobby populace just when the general public was starting to pay attention to collecting old baseball cards. It was a seminal publication that published a few brief but highly informative articles in most issues. I have been tracking down old copies of late in the hopes of finding some prime research material and have been amply rewarded. Here then is one story.

One of the better known odd ball Topps issues, a 1972 issued eight card "reprint" set of 1953 Topps cards, has been rumored for decades to have been a table favor at a Topps banquet in the early 70's with print runs estimated at anything from 200 to 1500 sets . All hogwash! The July 1973 issue of The Trader Speaks reveals the true story. 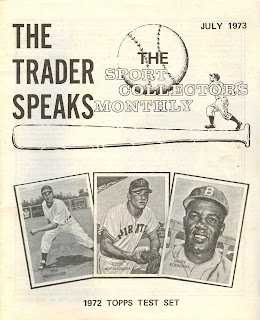 In a short article authored by Dan Dischley, these cards are described as a test issue sold at "certain retail stores" in Brooklyn in 1972. It begs the question as to whether or not a wrapper or box exists for this set as they have never been sighted. It's possible the cards were indeed printed for use as a table favor, never used and then sold in generic Trading Card wrappers but the fact they were actually tested is intriguing as the market for an eight card set of ball players from twenty years earlier would seem awfully slim.

I have owned half the set over the years but have since winnowed things down to a "Carl Furillo" card. 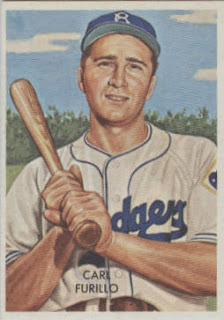 For some odd reason, this card does not feature the Reading Rifle but rather Bill Antonello. Two other players in the set are also incorrectly identified: Al Rosen is really Jim Fridley and Clyde McCullough is actually Vic Janowicz (which should set Heisman Trophy collectors into a tizzy).

The back of my "Furillo" has a penciled "Pee Wee" notation and a bold "Bill Antonello" in red crayon defacing it. I wonder if this particular one came from the real Topps company archives.  (UPDATE 5/27/18-It may or may not be from the actual Topps archives but that is Woody Gelman's handwriting) My previously owned McCullough also had a red crayon correction on the reverse. 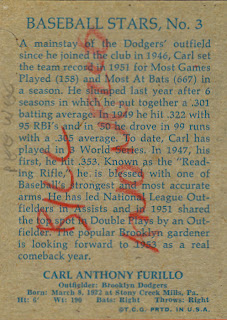 The backs of the cards echo the reverses of the 1934-36 Diamond Kings ("Diamond Stars" to quote the cards proper) . Just another example of Messrs Berger and Gelman invoking their boyhoods it seems. Check out the back of this Diamond Star card of Van Lingle Mungo to see what I mean. The fonts are similar even though the Topps cards do not have any batting tips on them. 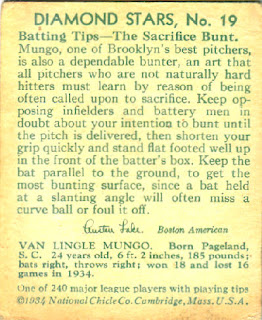 In the TTS article, Bill Haber is noted as selling the cards at the New York convention and another note in the issue indicates $5.25 would get you a full set (it goes for around $2000 today). Haber stated 300 sets were printed and that the mislabeled cards were intentionally produced with the wrong names, for reasons that are unclear to say the least. Despite that, this is a wonderful article that succinctly provides the facts of this particular test issue.

Here is the whole set, in some scans I found in one auction or another last year: 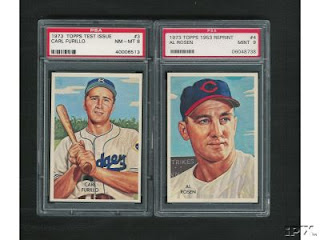 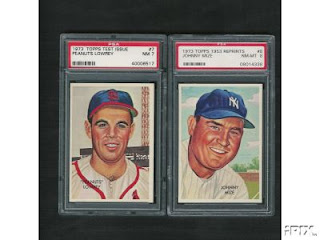 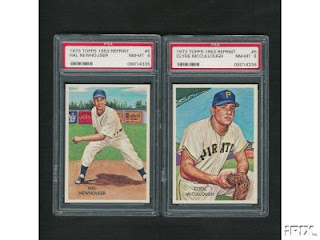 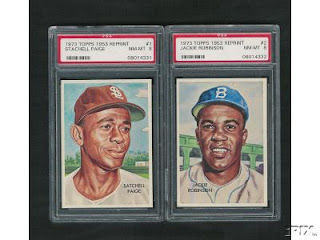 The contents of this issue also indicate a TTS print run of 5000 copies and mentions that when the first issue was mailed (November 1968) , only 1000 serious collectors were known in the US. I'll have more TTS inspired posts in 2009.
Posted by toppcat at 10:37 PM

Keep up the great research work. I look forward to reading more about what you find from the early hobby publications like The Trader Speaks.

I used to subscribe to TTS. I always wondered what happened to it. I think I began subscribing to SCD after TTS disappeared.

I wish someone would publish a CL of TTS issues.