Since I have posted about Topps very rare Flash Gordon cards recently, I thought it might be time to look at a companion set, namely King Kong, which was issued by Topps subsidiary Bubbles, Inc. Here is one of the great movie shots of all time in case you forgot what a marvel this picture was. 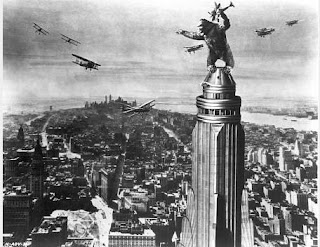 One of the most famous movies of all time, it was 33 years old when Topps developed a 55 card black and white set in 1966. These are rare cards and I certainly do not own any. However, I was organizing my hard drive recently and found a scan of two partial uncut sheets that make up the full set. The photo above looks to be memorialized in the bottom left corner. 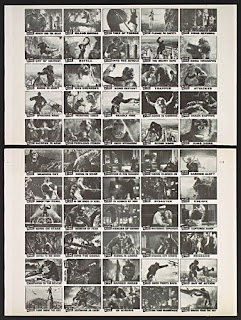 Unlike the very similar Flash Gordon set, which was possibly issued in retail cello packs, King Kong appears to have actually been tested in wax packs as John Neuner's Checklist & Prices of U.S. Non Sport Wrappers has a wrapper listed with a production code of 0-418-21-01-6 (the last digit signifies the year).

Interestingly, Donruss also was given a license to produce a King Kong Set and those can be found rather easily: 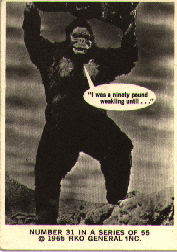 Topps must not have liked the results of the test they did and declined to do a national release while Donruss forged ahead. The 1965 Copyright Date is when RKO granted the license, by the way.

While I understand the appeal of both Flash Gordon and King Kong as they were all over TV in the 60's, why Topps issued black and white cards in the 1960's is beyond me.
Posted by toppcat at 5:59 PM

My understanding is that RKO delivered a copy of the King Kong Movie to Topps to take images from, and they rented a movieola and got the pictures. When they decided not to go ahead with production, the sold their images to Donruss, who used many of them in their release. That story was related by Bob Marks based on memories of Topps people in Wrapper #150 (Oct 1997).

Chick....thanks for this-I had forgotten about the Wrapper article entirely. I contacted Les and he gave me the OK to post some scans of issue #150 so an update is imminent.