Topps experimented early on with scratch off features on their cards and this early dabbling led to a stellar set of cards issued in two series in 1954 called Scoop (commonly but incorrectly called "Scoops"). Using a "you are there" type newspaper article on the reverse, purchasers had to rub two thick black bars off the front of the cards to reveal a painted image related to the story on back. 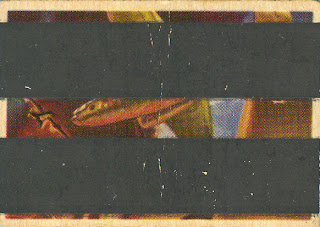 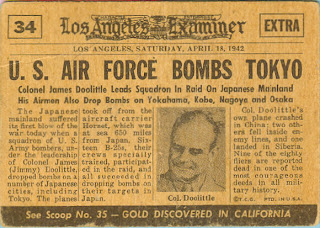 Measuring 2 1/16" x 2 15/16" these little babies were quite colorful and first issued as a 78 card series. They must have sold well because a second series of 78 cards came on the heels of the initial run. With the exception of a few ballplayers and boxers plus a handful of famous historical figures cards can be had quite reasonably these days, with second series cards going for about double those in the first. We are talking single digits for nice examples of the commons, even among the high numbers so this is a great set to collect. There is, however, a big BUT involved. 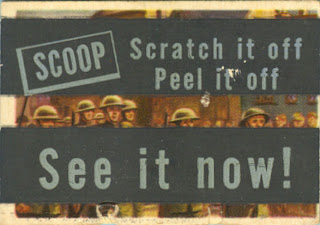 The bars are pretty thick so maybe with a little coaxing they would peel off.

The other cards in the pack were uncoated, so the story goes: 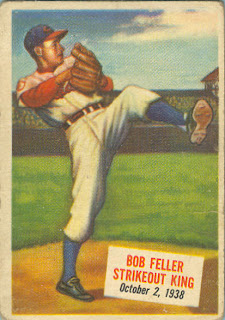 So really there are three different versions of these cards but I do not know if all cards can be found in all three styles. I think most collectors who go after a set try for uncoated cards and then try to obtain a sample of each black bar type. I would not recommend rubbing off the bars at this point as they look and feel integral to the cardboard now.

There are some boxers in the set as well that command decent but not exorbitant prices while Ruth tops them all (but is still pretty reasonable). Feller would be my choice for a baseball type (witness the one I own, above) and seems to be more plentiful than some other cards. I don't know why the second series baseball themed cards do not show individual players but it may have been due to some type of licensing squabble. The set was also issued by O-Pee-Chee in Canada, although I cannot state with certainty both series came out up north. This is a good spot to voice my long held opinion that a solid Canadian card guide is sorely needed in the hobby.

It's quite an attractive set and the photos on back are a nice touch. Here's a group that sold on Ebay a while back: 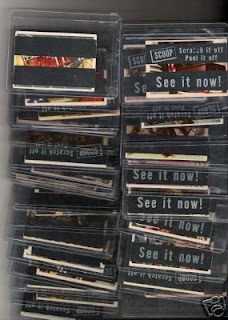 The wrapper is pretty nice too. Here is the nickel version in a scan I just swiped: 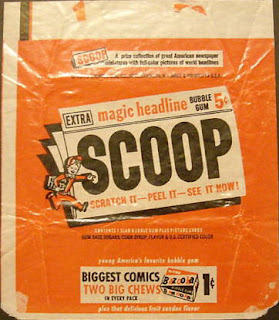 I can't find a scan of the one cent pack but it would have had a repeating design. If someone out there in Archiveland has one, send it along and I'll include it in an upcoming "catch up" post.

The current issue of The Wrapper (#244) has a piece on Sports Cards in Non Sports Sets written by friend o' the archive Bill Christensen that has the scoop on this set among others. Go grab a copy today and tell Les I sent ya!
Posted by toppcat at 6:45 PM

eri have a 1954 topps scoop bob feller strike out king card that looks like it had the two black bars over the front scratched off. Any idea what the value would be? It's in great condition...not really for sale, but would like to have an idea outta curiousity.

any estimate would be appreciated.