Well your blogmaster is off for some hard-fought rest from the real world for the next couple of weeks. Fear not though, Topps-heads, all sorts of goodies are planned for the south side of the All Star Break. Until then, take a gander at this production still from Topps' Duryea plant, which makes me exhausted just looking at it! 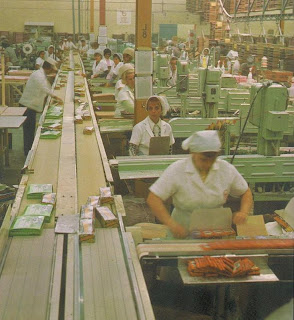 Those are 1974 baseball cards hot off the presses-cello retail boxes on the left, wax boxes on the right (I originally though the latter were factory sets but can't find a reference at the moment positively identifying the factory set graphics). The 74's were the first set of cards that could be bought all at once in complete form (all 660!) and they were housed in a nice, Topps-produced box to boot. The boxed sets were sold through Sears and probably a few other big retailers of the day. I'll try to score a scan of the factory box down the road.

I'd love to smell the gum fragrance flowing through-out the factory!