I was all set to post about something else when I got my latest Ebay purchase in the mail and made a serendipitous discovery on a card a scant half a decade in age. What, you say?

Well I really do not collect anything beyond the 1970's with very few exceptions but have always wanted a card of Topps mainstay and one of several fathers of the modern baseball card (I would include Woody Gelman of Topps and also Warren Bowman and George Moll of Bowman in that august group as well) that worked at Bush Terminal back in the golden days. 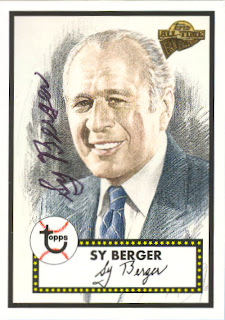 and then noted the back revealed that 62 years ago, Sy Berger started working for Topps: 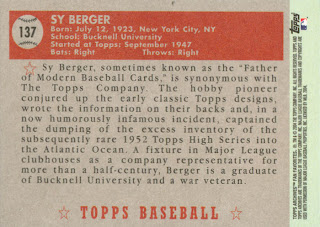 Yes there are other Sy Berger cards out there, including one in the 1964 Topps Banquet set (as yet unblogged about here) but on the first day of September 62 years hence, I thought it would be nice to simply post a small tribute to Mr. Berger, no matter how new the cardboard involved turned out to be. So here's to you Sy!
Posted by toppcat at 6:30 PM

Wow, I grew up right up the block on 39th street and 5th Avenue. My grandfather used to work at Bush Terminal in the 40's and 50's. I am going to ask my dad if my grandfather brought home any baseball cards back in the day.

Glad to see that others recognize the importance of Sy Berger's contribution to baseball and baseball cards.

I am 9+ years late on this, but the card you have there is the base card of Berger that must have been subsequently sent to Berger for an autograph. There is also a certified autographed card that he signed in the box where the printed autograph is on the base. I wrote to him around the time this came out to send him the card and ask him some questions. He not only signed the card but replied to all my questions. (The one I remember was "Who is your favorite baseball player?" to which he responded "Bob Keegan, since he and I were friends in college.") The card and response letter are definitely among my favorite pieces of baseball memorabilia. I did later pick up the certified one, but I prefer the one I got back from him directly.