Topps tried for seven years before they were able to issue a cloth sticker baseball set. The 1970 materials test was discussed here a while back and I will shortly post on the more readily available 1972's but there was also a tiny test in 1976 that mirrored and then expanded upon the materials experiment six years prior.

Only two players comprise the checklist in 1976, Bob Apodaca and his former Mets teammate Duffy Dyer (I will refrain from using our childhood nickname for ol' Duff but you can imagine what we did to his last name). In addition, four different types of materials were tested in '77, ranging from thin to thick cloth and veering into the realm of felt and ersatz silk, the latter of which ended up being very close to the material used for the well known 1977 issue (also unblogged upon at present). Here are the two players in uncut "silk" form:

It is a bit strange the cards were oriented upside down in relation to each other as I once held in my hands an uncut vertical strip of the felt Dyer cards that were all oriented the same way; Topps normally did the upside-down trick when full bleed borders made it convenient (1953 and '54 Baseball are prime examples of this) but these borders are white. I also handcut a Dyer from said strip but alas I cannot find among the flotsam and jetsam here at Archives HQ. The felt was sheer though and I doubt ever had a backing attached.

Speaking of backings, the uncut strip has the typical brown Topps backing used in the 60's and well into the 70's:

Despite the wrinkling this strip is still pretty well integrated.

The 77's of course had a white backing with printing but I'll show that in the '77 Cloth Sticker post I am working on (don't worry, through the magic of labels you can view them all together eventually).

Here is a scan from a mis-remembered source showing all four types of material tested: 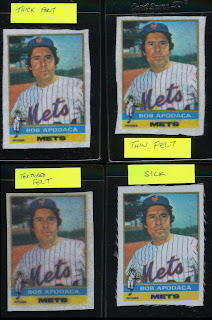 Just so he doesn't feel lonely, here are three types of Dyer's, from an Ebay auction I unfortunately lost a while back:

Apodaca seems in shorter supply generally than Dyer but there is a fairly good amount of these out there, unlike the situation about twenty years ago when they were pretty hard to find.

I can't recall another tested product that took longer to materialize in the marketplace than the baseball stickers. Seven years time to do so must have meant Topps had technical difficulties with the cloth material, which I will adress in more detail when I get to the 72's.
Posted by toppcat at 8:08 AM