One of the pitfalls of collecting and researching a specific Topps era is that you have to consider everything. It was ineveitable then, that the conversation would roll around to one of the Tiger Beat set here at the Archive.

I'll not delve into the murky depths of Bobby's fame but merely will focus on his Topps cards tonight. For some odd reason, possibly linked to teen dream fadeout, none of the three card sets Topps produced in 1971 featuring Mr. Sherman ever saw proper issue.

The most well known set featured pink borders, groovy graphics and some puzzle backs. I bought this card for my wife a few holiday seasons ago and it was about the best thing I ever gave her: 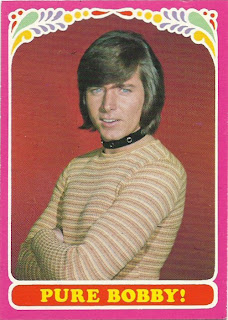 Yes, that card has a prominent place on the desk of Mrs. Archives.....

The back was also pure Bobby: 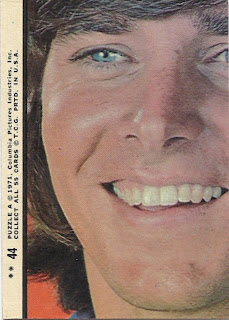 Apparently only test issued, perhaps a dozen full sets exist. It is alleged extant singles were issued in a rather lumpy format, making it impossible to complete a set at this juncture with examples still free in the wild. Perhaps, perhaps not but these are not all that easy to track down.

Lesser known are two other sets of Bobby, likely issued in 1971 despite a 1970 copyright.

A test set commonly referred to as Bobby Sherman Plaks is known within the hobby and features black and white shots, rounded corners and a facsimile autograph in the same format as the big Super cards Topps was big on in 1970-71. Like the '70 Football Supers there were 35 Plaks available, with fonts on the backs of some cards similar to other Topps thick slabs. These are harder to find than the pink bordered cards. Here's a back; fronts are available for your viewing pleasure here. 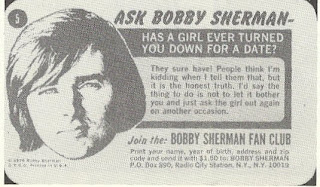 The above card would have had a blue hued, grainy B&W front. There is a catch though, as there is also a post card back for these, featuring fronts that are of a better quality and more traditionally contrasted B&W photography, indicating perhaps a simultaneous issue or even a licensing problem that killed the Bobby sets. Numbering varies as well between the two types. 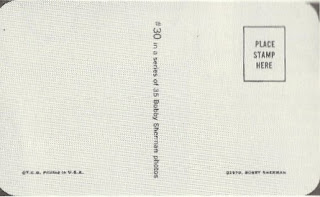 Scarcer still are the inserts to the Plaks set, the Kiss Bobby set. Fifteen in total, plus a "Kiss Print" card, the plan was to make them moisture activated by a (hopefully) girl's kiss, leaving a red "lip print" on a B&W picture of Bobby. It's almost a certainty the "Kiss Print" card was extra printed.
The idea was to collect the kisses of all your friends. 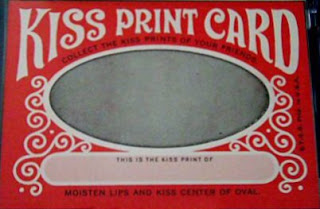 Bobby Sherman went on to a post TV career in law enforcement and was a sheriff in San Bernardino for many years, thankfully eliminating the need for a Behind The Music type expose 25 years after the fact.
Posted by toppcat at 11:08 PM