Well, another Ebay auction featuring a purported Topps Tattoo pixel test has ended. This time we can identify Sandy Koufax and Orlando Cepeda plus there is a mystery player who looks a lot like Joe Morgan. 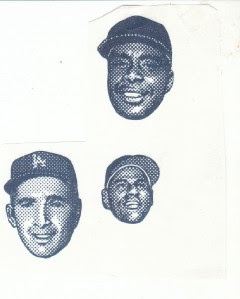 This one went for a lot more than the last one. If it's supposed to be a 64 Tattoo test, then Sandy should look like this: 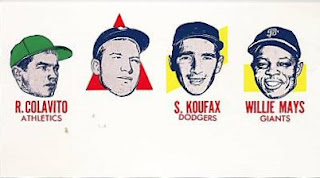 I don't think it's a match, do you? I also don't know why Joe Morgan would be among the other two august tattoos at this time. He really didn't gain traction until 1966 in Topps insert sets, appearing in the Ruboffs that year albeit in a different pose. I'd really like to see some provenance on these pixel tests, otherwise they just could be red herrings.
Posted by toppcat at 7:40 PM

It looks like they flipped Koufax around. If you do a mirror image of Koufax, the 2 match up.

But there is no LA logo on the "flipped" Koufax.