In our last adventure, I left you all hanging a bit on the 58's but with good reason. There is another facet of the Theory of Checklist Relativity to be touched on, namely variations on the cards proper.

Part 1 showed us four team cards in the 1958 semi high, or fifth series with two different types of checklists on their backs. Thanks to Friend o'the Archive Doug Goodman, here is a complete run of the four checklists that give you the players in alphabetical order (well, 439 cards since #145 Ed Bouchee was pulled due to an arrest and never appeared in the set): 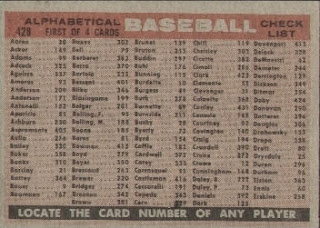 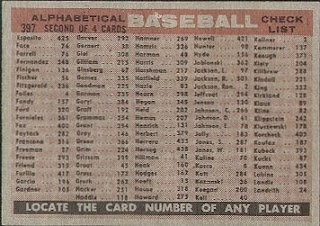 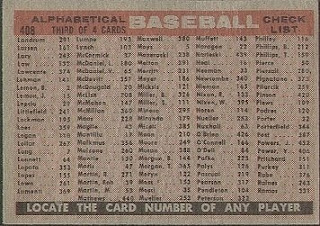 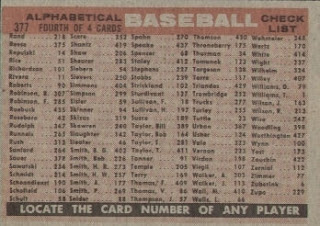 You will notice that those cards are out of sequence; the highest shows the low part of the alphabet and vice versa! Now I am looking at a 66 card semi high series but there is a germane question I cannot answer. Were all five first series cards printed in 88 card runs or did the first run have 110 cards in it, thereby previewing 22 cards from the next series until everything comes back together at the end of the (66 card) fifth series? Don't forget all the major price guides show a 110 card first series so the next series preview theory may be viable.

Why is this germane, you may ask? Well the four team card checklists above obviously have numerical counterparts which have a 7 or 8 times price kicker when compared to the alphabetical versions. That indicates a definite and deliberate short print pattern on the numerical backs.

If they were printed in a single series, locked in run of 88 cards (i.e. the series and the run match up excatly from one through five) then there would be three of each team card front on a 264 card master uncut sheet. Then, in a scenario where the A/B/A B/A/B pattern is at work, one 44 card batch of cards could contain the four team cards with numerical reverses. Conversely, a 66 card series run on 264 card master sheets would yield identical A/B patterns of 66 card substrate. However, a third choice presents itself.

What if Topps only planned a set of 440 cards in 1958 and then they managed to sign Stan Musial with just enough time to rush a card of him out? The alphabetical lists stop at 440, indicating finality to the planned set. Topps obviously made a big deal about signing Musial out of the regional card wilderness in 1958 (he had not appeared in a nationally distributed set since 1953 Bowman) since they advertised this fact on the four numerical team card backs from the 66 card semi high series. Finally, the '58 high numbers are readily available and do not command any significant premium, indicating a full run of cards was printed after the first 440.

If that's the case, then it seems clear they had no time nor the stable of players (there were only around 400 active roster major leaguers in 1958) to compose a full 55 card series so the braintrust at Topps came up with the Sport Magazine All Star cards so they could get Stan into the set at the last minute and also fill out the high numbers. The timing of this indicates Musial's signing had to come after the All Star selections were made in 1958. They also added 34 no-names (at the time) to the 21 All Stars to give us a 55 card high number series, most of whom had limited playing time prior and therefore required minimal stats on their cards. I admittedly have not researched the service time of each of these 34 players and don't own any '58 highs but the names don't seem to include too many veterans.

This brings us back around again to the short printed numerical backs. I think it likely that once the final 55 card series was green-lighted that the final run of semi highs resulted in a change from the alphabetical checklists to the numerical ones with the Stan Musial announcement and then maybe just one side of the full master sheet at that.

There is more to the Musial All Star card and I'll get to that in a minute but first, since the mighty Punk Rock Paint blog gave us a shout out on the checklists and I'm riffing on them while cranking out some Leatherface in homage, which always puts me in a good mood, I'll show all four numerical counterparts, even though I had one scanned last time: 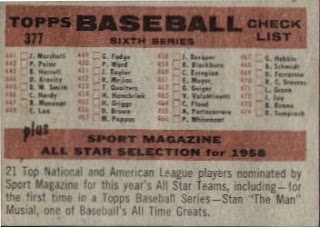 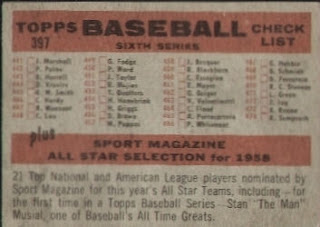 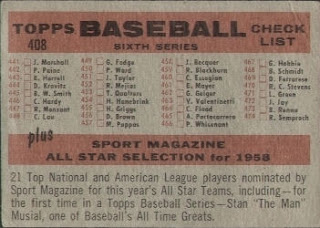 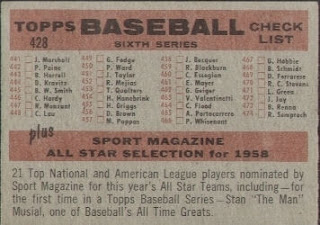 Those are all courtesy of Mr. Goodman by the way.

We also know the Musial AS card was triple printed and so was the Mantle AS. How Topps did this was a bit odd and violates the 11 card row theory (boy, I gotta lotta theories, huh?) but they pulled four regular player cards and subbed in the extra prints of the Mantle and Musial All Stars. I first encountered this in the February 23, 1996 issue of Sports Collectors Digest: 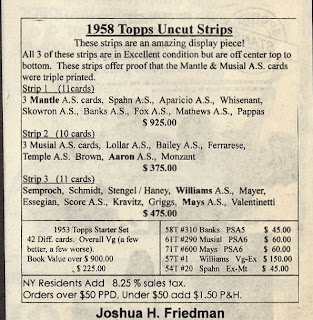 Here, see for yourself:

Those three rightmost cards are the Mantle All Star: 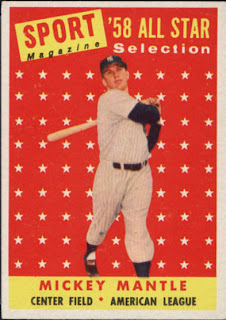 And thanks to the miscut I believe Stan the Man resides directly below the Mick in all three columns: 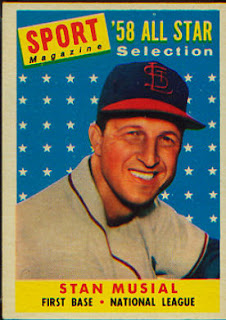 That Red for AL, Blue for NL background is consistent although since the Yankees lost the '57 World Series I find it curious that the All Star Managers card has a red (AL) background but so it goes. Topps had to create slots for the triple prints so they pulled four cards. #443: 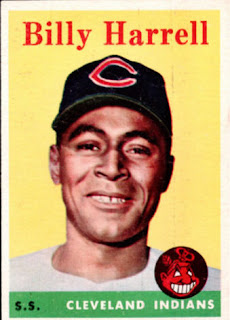 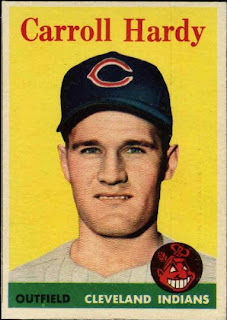 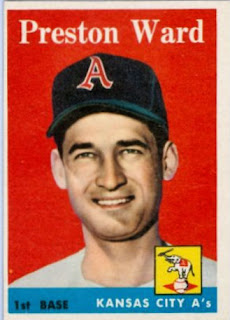 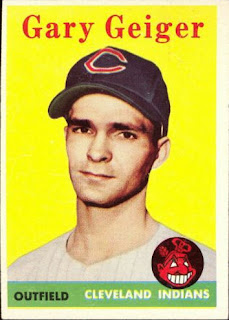 By the way, the array of the Mantle and Musial cards seems to indicate Topps cut and packaged cards based upon the vertical columns and not the rows. Had they been horizontally focused, the triple prints would seemingly yield to poor distribution in the packs. Intriguing.

We get into some weird short print/over print scenarios with 55 cards. You could have 44 cards appearing five times and another 11 appearing four times on a 264 card master sheet, or you could have two identical sheets with 22 extra printed rows per 132 card half sheet, a possibility here given how the triple prints play out. The triple printed rows may just be the orphaned 22 card rows on each half sheet

I would also offer that, given the low price kicker on the short printed cards (only about a third more in value than a regular high number common) one half sheet may not have lost the rows with the four players shown above.

There was also some type of mail in premium in 1958 where Topps (or someone) sent out partial sheets. I wish I had better scans but I don't:

There are also variations in the low numbered cards involving team and player names being white or yellow but that is definitely fodder for another day. And don't forget the Pancho Herrera "error" card, which I think is merely the result of a printing mishap and will also have to wait for another post.
Posted by toppcat at 8:21 AM

I don't have a card to check it myself...but is the final alphabetical checklist in error? It appears that George Zuverink's name appears above Zupo's. Did Topps have a little mental lapse when they alphabetized the player list, or is Zuverink's last name spelled wrong?

I am dizzy. Please make the world stop spinning. I wake up in a cold sweat after dreaming about the Theory of Checklist Relativity. There isn't going to be a quiz, is there?

No quiz, just a mid-term!