Now that the annual, mind-boggling REA auction has passed, a look at the 1953 Topps baseball card original artworks offered therein appears in order. First though, as we are wont to do, we must look at the past.

Some of you may recall the 1989 Guernsey's auction of some original Topps artwork, file copies and the like: 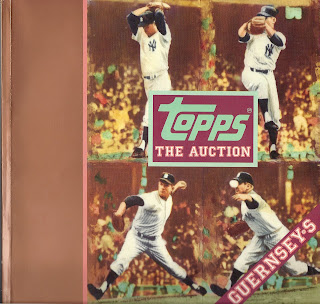 It was what would now be called a BFD. The centerpiece of the auction was the original art for the 1953 Mickey Mantle and Whitey Ford baseball cards, which sold for big bucks. What is not as well known is that four other paintings were included in the auction: Bob Feller, Roy Campanella, Jackie Robinson and Whitey Ford: 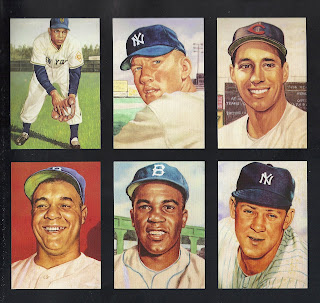 Those six paintings were not accompanied by common players within the pages of the auction catalog and it always bugged me that more were not available. Well, it turns out there was a good reason for that; they were in Sy Berger's basement.

REA's auction featured a whopping 112 paintings used way back in '53! That means 118 of the 274 paintings used to create the 1953 baseball set have been disseminated in the hobby. The artwork was originally to have been in the 2009 REA auction but pulled before being offered; I have to suspect the current ownership of Topps took issue with Mr. Berger reaping all of the proceeds and a deal amenable to all parties was finally worked out.

Here's few of my favorites: 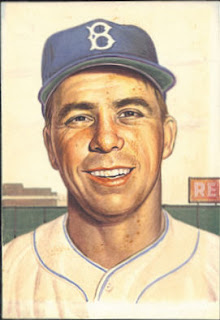 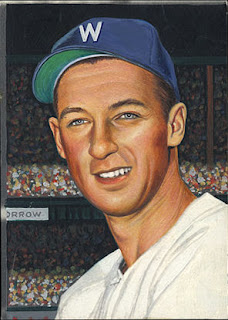 And a peek at the SGC slab that housed them all: 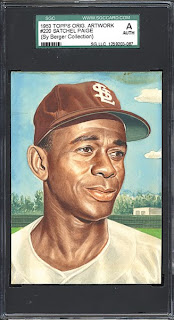 The original art measures about 3.25 by 4.75 inches, or about 56% larger than the actual cards and many of the paintings had glue remnants from the production process marring their surfaces. There seems to be some variance in sizing as well, so the whole process was likely more haphazard than the well-organized auction lets on.

Oh, did I mention there were five unissued players included within? I'll be a tease once again and save those for next time. I'm off to the warmer climes of Ft. Lauderdale for a bit of well deserved R and R but will have more for you all on the flip side!
Posted by toppcat at 9:21 PM

Oooooh! I can't wait to recreate the missing cards!