As we journey into 1959, Topps was starting to standardize how they printed their baseball cards. 1958 saw a real slapdash final series (6th) and what I believe were four 110 subject printings made to look like five 88 card series prior. After their efforts to conclude that season's set, the Topps braintrust look have have really started planning out the best way to issue their cards.

I found a 66 card proof sheet on my hard drive that is the key to seeing how the 59's were printed: 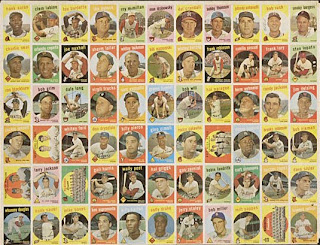 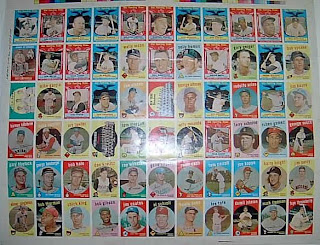 identifiable by the black number block on the reverse, as well as the cream stock: 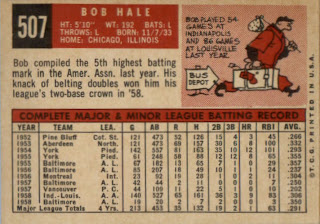 Compare this with the last card of the prior run, with a green number block and gray stock: 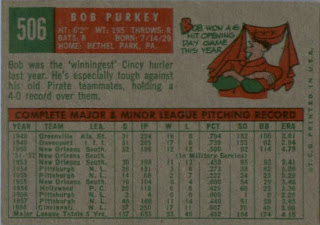 From #1-506 the blocks are green, as was the text; I think the black looks much better. I wonder if the ink color was changed when Topps started printing the 1959 football cards, which also have black ink and may have been a move to expedite printing of the omega and alpha series of each respective set.

I have a sneaking suspicion that Topps printed some combination of the 4th, 5th and 6th runs above together so have marked them with an asterisk but don't have the uncut sheets to prove it. They end up at at #440 though, through the "5th" run, which trues up in the real world as the previews would get get too far past the press runs otherwise. This is where they caught up in 1958 as well. I have to think a bit more about the implications of two 66 card semi-high series being printed separately.

No matter how you look at it, the checklists on the back of the team cards showed series that only existed in the minds of the creators of the cards. Look at the 7th Series checklist to see: 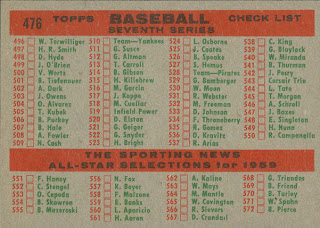 Those black number blocks begin after 11 with the green blocks if you go by the official count. I do not believe those 11 cards from #496-506 were printed with the rest of the high numbers but if you are selling cards the kids are already buying those 11 before the last series comes out. Boy, I'l l bet they wanted to complete that run badly!

Here is a checklist card from the third printing (the card stock variation run): 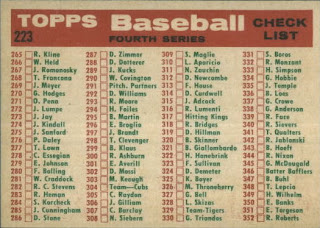 And just for fun here is the 3rd Series checklist with an error with the two rightmost columns are transposed: 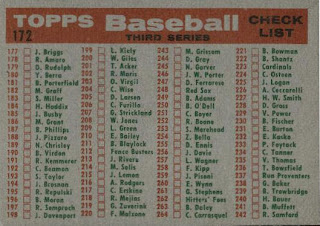 You get the idea. Topps was using the Theory of Checklist Relatvity once again but with a bit more forethought than in '58.
Posted by toppcat at 10:21 AM