Back to the subject of Checklists today campers, specifically from 1958, the year major league baseball became bi-coastal and the Topps cards really started to show their colors. It also marks the beginning of what I call the Theory of Checklist Relativity, or TCR for short.

As we know, Topps started printing cards on 132 card half sheets in 1957. These were always arrayed in 12 rows of 11 cards each. You would think this would lead to nice, even 132 card series but it never, ever did in the baseball sets. Without looking at an uncut sheet it would be hard, if not impossible to see which cards were printed with each other. However, thanks to the way Topps printed their checklists we have a window to peer through.

I managed to track down my tearsheet from the January 22, 1999 issue of Sports Collectors Digest which detailed Mr.Mint's October 1998 "Philly" find of about 200 uncut sheets (mostly partials but some 132 card half sheets were found) from the second series of 1957 baseball cards. If you remember or saved that issue, just beware that the sheets shown on the cover were reconstructed as virtually all sheets from the find were damaged, some quite heavily.

We can see how both halves of the full 264 card sheet when reconstructed yield three copies of each card, in what I call an A B A / B A B pattern, with each letter representing a distinct group of 4 rows of 11 cards. This is one half sheet (Mantle is rightmost in the second and tenth rows, so he appears in the A grouping): 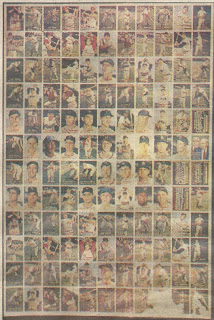 So the pattern is A B A. Here is the other half sheet sheet with Mantle rightmost in the sixth row, with a B A B array. You can see how the A B A / B A B pattern works when comparing the two: 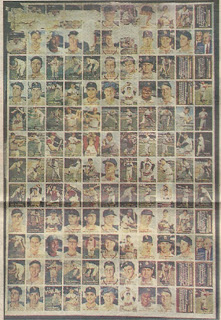 There was a closeup detail or description of about a dozen cards which show they ran from numbers 90 to 170 so I feel safe in saying the 88 cards from the second series were all printed together and that the first four series in 1957 were 88 cards each, which exactly matches the checklists. The fifth and final series of 55 therefore also checks out using this reasoning.

I am not certain if Topps co-mingled series in 1957. I suspect they may have but don't have access to unopened pack runs. It does seem certain that they were seeing if the checklists would be a good way to advertise the next upcoming series.

In 1958 they did something different and started a trend that would continue through 1972, occasionally refined, where the series runs didn't match what was on the uncut sheets. In addition, the team card backs became home to player checklists which continued through 1960.

The information on the 1958 checklists in the major price guides gives us the following series runs and totals:

The checklists tell a different story though, revealing five 88 card series on the backs of the team cards: 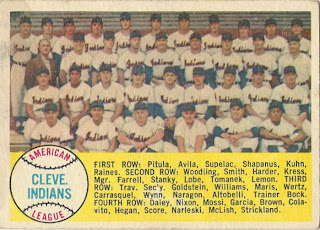 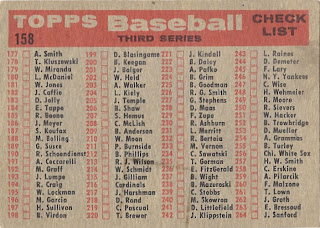 Those show numbers 177-264 belonging to series three and a look at all five confirm that the first five checklists had 88 cards listed on them. This is why I call it the Theory of Checklist Relativity; they are showing series that are different relative to the uncut sheets or what is shown in the major price guides.

What does it all mean? Well, I'm going to be a tease and put that part of the discussion off until my next post, which will delve into the '58 uncut sheets and their assorted mysteries. Not gonna leave you totally hanging though, let's look at series "6" before we go.

The four team cards that appear after #440 (Redlegs, Orioles, Braves, Tigers) come two ways as you can find a numerical checklist or an innovative alphabetical one:

The alphabetical cards that showed the numbers of your favorite players spread out over four cards so you could track them down: 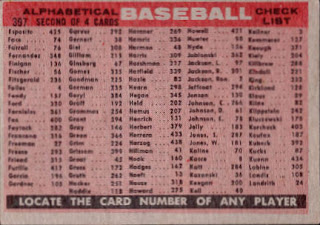 They only go up to #440 though, or exactly five runs of 88 cards each. As you can see on this numerical checklist back, something was afoot in the sixth series: 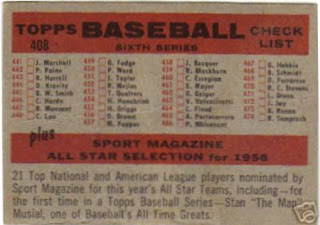 So, where oh where is the checklist for the Sport Magazine All Stars? Why on the back of the All Star Managers card,of course! 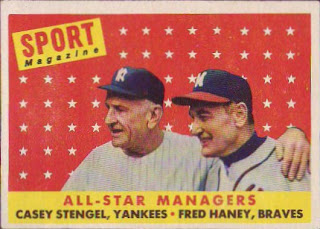 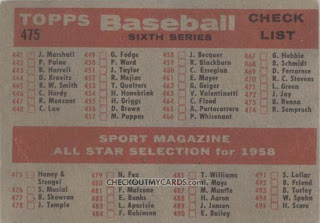 That is from checkoutmycards.com kids, the only site I could find with a back scan.

Those all star cards are one of the reasons I am holding off the rest of this discussion until next time. See you soon!
Posted by toppcat at 10:12 AM

It is fascinating as it is confusing. This is like a mystery novel for card guys like me... Hmmmm, I would buy a book about checklist/printing mysteries. Well, you have one sale guaranteed when you write the book.