The 1949 Play Coins of the World issue is a big touchstone here at the Archives, as it is one of the earliest sets issued by Topps. Seemingly issued as 1948 turned into 1949, this little set identified as PX4 in the American Card Catalog may in fact be two sets in one.

I had previously questioned the size of the set, described as 120 in number by Topps in period advertising but truncated by some other sources. Thanks to a recent Ebay victory, I think I can set the count at 120 but only for what is the plastic version of the set (yup, there is more than one variety-keep on reading!).

A large cache of coins, of which my win reflects but a small part, has been auctioned in recent months at the world's biggest garage sale and there appear to be five colors, each pegged to a specific denomination, for each of the 24 countries represented in the set. 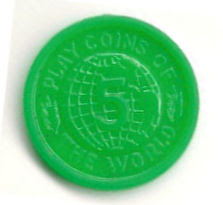 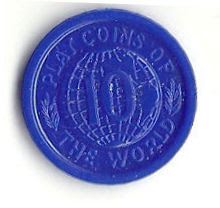 while red is two bits: 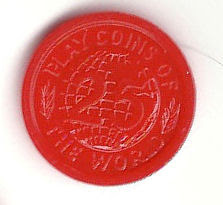 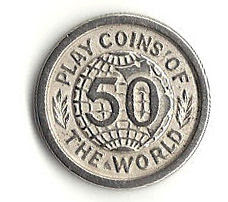 and the 100 in what could either be gold or copper; gold is more romantic but copper is more practical, no? 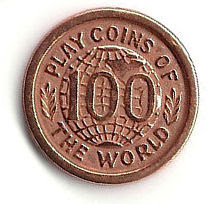 Silver and gold are merely plastic made to look like metal and I must say they look pretty spiffy and even shine a bit. Copper and gold likely have cross-polluted in some listings so that may be one run of 24 we don't have to count; which one--you tell me!

The Play Money of American Children site indicates yellow coins with a 1 denomination exist but I have never seen any of that color or amount in the current auctions or in various online searches so that could be either an error or represent a scarcer type or even one of the possible side-sets (subset seems incorrect here) I'll touch upon momentarily. There is a lot of play money out there, by the way.

Here's the corresponding fronts, a mix of Peru and Finland, for you curiosity seekers and completists: 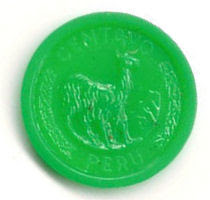 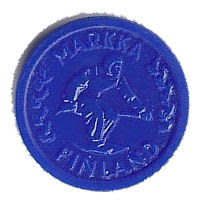 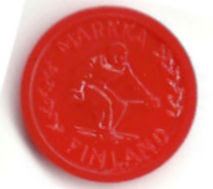 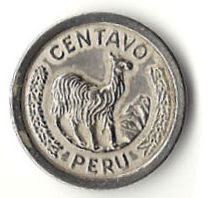 Now, the coins were sold in both penny packs and a larger box of "Play Money Pops". The thinking is these are the same sets and that the pops are from Topps but I do not have enough background to confirm, although it seems like lollipops would be a Topps confectionery staple. Tabling that bit for now, until scans and research materializes, I need to figure out what is going on with this odd couple:

That scan is from a mixed Ebay lot of mostly coin like products. The first problem is that the 50 denomination is the same color as the 100. Mistakes can happen and the end of production runs can result in the breakage of patterns within sets but the thing is, the above two coins are corroded in the telltale green of copper after oxidation ends and thickening begins. Therefore, the above examples are made of metal but I have no idea where they are from.

Certainly it is possible other denominations exists in metal as well altho' it might just be the two highest. I do not think Topps manufactured these, as it would be very inconsistent for them to do so as third parties generally did their printing and other production related to the gum pack inserts. Did Topps make plastic coins from molds already created to produce metal play coins or did they only have a license for a specific period of time for these? Ah, sweet mystery.....if you have any ideas, drop me a line.

I'll leave off with a great ad piece scan from Legendary Auctions as they just probably shipped this to some lucky winner (more on this next time; I told you this was tantalizing): 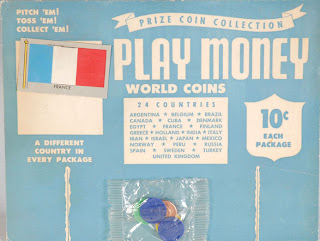 a website at:
www.rfc33.tripod.com has a link to Jack Philips play money page where he lists all colors and denominations of the Topps Play Coins Of The World