Who You Callin' Yellow?

Well leave it to the old Net54 Vintage Non Sports board to come through, specifically the man in charge Tom Boblitt, who unearthed a yellow 1 denomination piece from the 1949 Play Coins of the World set somewhere in the wilds of the internet. Behold the French franc: 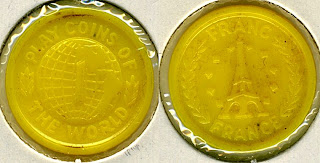 I have seen some lists that show it possible all 24 countries have a yellow 1 coin; the question is: why are they so scarce when compared to the other colors? I have to think they yellow coins were added as an eye catcher in the bagged package of coins offered by Topps in 1950 as they tried to sell through the issue. The yellow coins do not seem to have come in the penny tabs in 1949 but it's very hard to tell over sixty years later how the penny tabs were designed for sale.

The master set of these may total well over 300 coins; the jury is out but it seems entirely possible the metal coated coins from Play Money Pops come in a number of varieties. There's now way to tell without a lot of legwork and I am not inclined to try and track down the metal coins one-by-one but if you look at the referenced Net54 thread, you will see why there are so many possibilities.