Well, the discovery of the Mickey Mantle variation in the 1967 Punch Out set has rendered a good portion of my last post obsolete as it turns out. I was going to go back and edit the previous post a little to avoid confusion but I finally decided against it. I think the mysteries of this set can finally be sussed out though.

I was right that there is a common divisor with the set but it's not 3 or 9 or 22. Nope, it's clear now that it's good old 5 & 10. It's also clear that a meticulously thought out set was disrupted by events after the end of the 1966 baseball season.

Let's take another count of Captains: 14 are known with a single lineup, 40 with two, 26 with three and 6 with four. 86 players and 90 poses in all. Let's also look at what I called the 66'ers last time out, i.e. players who retired or changed teams after the 1966 season as the player's team at the end of play is what is reflected in the set.

66'ers? There are six: Clete Boyer, Don Lock, Floyd Robinson and John Romano from the AL, all of whom would be in the NL for '67, Sandy Koufax, and one more, who we'll get around to in a second.

After I thought there had to be 198 lineups to make the math work for the set, I did a survey of each player's position. What I found out was that most positions proved out to 10 players per, with 30 Outfielders as no LCR distinction was made by Topps. Additionally, it looked an even split for AL and NL players at each position but I was missing four: 2 Shortstops, a 3rd baseman and a pitcher. Since only 86 subjects are known this made a lot of sense but 90 cards would have to comprise a full set with even distribution. So, I took a closer look at the phantoms to see what was up with that.

One, Jerry Grote, a catcher for the Mets, was at a position that proved out to 10 players, so it seems he really was a no-print. His inclusion in the Standard Catalog checklist means he must have been mistaken for Dick Groat along the way (by moi). This leaves four players, all rumored to be in the set but never seen as Captains and all of whom appear in lineups: Brooks Robinson, clearly a 3rd baseman, Bob Gibson, obviously a pitcher, Bert Campaneris, a full time shortstop by 1966 and Roy McMillan, also a shortstop. Four holes filled perfectly, even down the the AL and NL split (2 of each)! Let's call these guys the Phantoms for real now.

The omission of McMillan is the easiest one of the 66'ers to explain as he was released by the Mets on October 17th, 1966. This also helps with the timeline as does the November 18th retirement of Sandy Koufax, who is a two-lineup Captain. Other than McMillan, who retired early enough to have his picture pulled from the set but not his lineup spot, and Koufax, who retired late enough to still be included as a Captain, the other four 66'ers were traded from the AL to the NL. In order: Clete Boyer went from the Yankees to the Braves on November 29th, Don Lock from the Senators to the Phillies the next day, Floyd Robinson went for the White Sox to the Reds on December 15th and John Romano also was dealt by the Pale Hose and joined the Cardinals the day before his ex-teammate.

There is no real correlation, save one explained below, between lineup appearances and the 66'ers as the traded players were on 3,2,1 and 4 respectively. Where I think the congruity occurs is with the four players having pose variations and the four missing Phantoms. Clearly the four Phantoms were meant to be in the set if they appeared in various lineups but when the 66'ers who retired or were traded after McMillan did had to be dealt with by Topps they were partially wiped out of existence in the set and replaced by the four pose variants, all of whom had significant fame at the time (Matty Alou won the 1966 NL batting crown if you were wondering).

This suggests to me a second print run, with the four pose variants and without three of the four remaining 66'ers; Romano being the exception. I suspect the 66'ers are Phantoms entwined in the complex mechanics of order created by Topps and one affected the other production wise among a small group of Captains. Why these contortions were necessary are a mystery; it's not like Topps included a checklist with the set or a chart detailing the intricate logic of its construction.

Topps likely did not plan for any player to be on more than three lineups but instead of filling holes in a very complicated ordering of the subjects and positions, I think the six players with four lineups were merely run off an extra time to replace the 66'ers. Romano was probably too locked in to too many lineups to be pulled so he was given an extra print. I may be running around in circles but I think this means one more pose variation is yet to be uncovered as one of the Phantoms is also a 66'er and it seems like one hole would remain otherwise. Perhaps alleged cropping differences are also due to a second print run.

This rejiggering also led to some production problems I think. This Groat card has Matty appearing twice in the lineup: 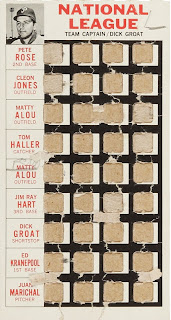 I'm sure that was supposed to be Felipe-too bad Jesus wasn't around! Actually, the Frank Robinson Orioles cap variation has Brooks and Floyd in the lineup; all three Robinson's on one card. Check it out.

I am going to leave off with team checklists for the set. Even though teams are not given on the cards, a player's team at the end of 1966 clearly controlled content so you can consider this list definitive for the 86 known subjects (No Prints are not shown):


I will probably have a little more to say on this set-still thinking things through a bit but we'll see!
Posted by toppcat at 6:24 PM