Well, I wasn't sure it was inevitable but the two missing "small" 1955 Hocus Focus baseball cards have surfaced and fetched an amazing price on Ebay. Hal Smith and Mel Parnell just fetch $2,247.00 as a pair. Not bad considering their condition is ragtag even for this set. 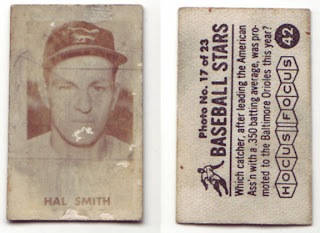 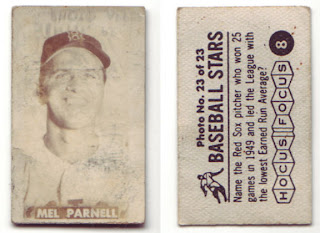 Previously, it has been speculated the two missing cards as part of the series of 23 Baseball Stars replicated the sequence found in the larger cards and their series of 18. These two players confirm that is indeed the case.

While I have not visually confirmed the existence of each of the small Hocus Focus cards, Bob Lemke has confidence in the Standard Catalog list. However, I have only been able to confirm eight visually and as I found out with the larger 56's (they are not really from that year, it's just easier to ID them that way), many cards have been mixed up in the checklisting of the two sets.. I will offer that caveat and hope the Baseball Stars Series of 23 checklist is like so, subset numbers only shown and the cards I have seen marked with an asterisk:

I once thought it possible not all of the small HF cards were issued but the completion of the baseball subset checklist seems to indicate otherwise, especially since it''s the biggest subset. While each subset series in the larger cards has five less in number than their smaller siblings for the subsets that are known, I believe it highly likely the uncut sheet array is 126, which means two of the subsets match the corresponding ones from '56 in number and the rest have the five additional, if I am correct. Which subsets are mirrors of the 56 subsets though, I don't yet know. These are very, very hard to find cards!

There is more on the two new additions to the checklist over at Bob Lemke's blog.
Posted by toppcat at 8:23 AM