BFF o'the Archive Jeff Shepherd sent along a couple of neat scans the other day.  While it's meant for my upcoming guide to the early history and cards of Topps, since that is still a good three months off, I felt a preview of sorts might be fun.

When Bazooka was launched in mid 1947, it was sold only in a five cent roll.  You can get a good look at this roll in a Topps advertising photo of the era:

There are some things worth noting here.  Topps always (and I mean always) gave perceived additional value for money in the early days.  Sometimes it was a mere "6 for 5" deal like we see here (that roll of gum could just as easily only been scored into five pieces) and other times, when the cards started to come out, it was extra play value.  If you look closely at the bottom line of text, you can see the "Don't Talk Chum Chew Topps Gum" line made famous in World War 2 advertisements.

The comic shown is called Bubbles. This was possibly the first strip to be included with Bazooka, although some Fawcett Comics reprints may have been first. You can also see that the right edge of the comic is cut off.  This seems very strange for an ad piece to show this and Shep advises he bought a few different Bubbles comics and they were all badly miscut.

The comics were not printed on the back of the wrappers in the early days; the technology was not quite at that point in 1947-48.  The outer wrapper would have looked like this: 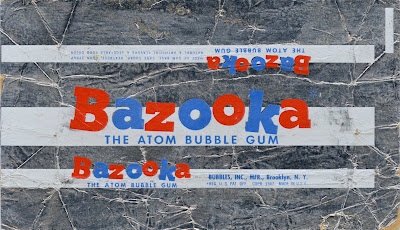 Shep pieced together a couple of Bubbles miscuts to produce an "intact" scan.  Intriguingly, it's the same strip shown in the ad above:

Topps would go through over a dozen different strips before finally hitting comic gold with Bazooka Joe in 1954. Still, the gag in the above strip looks like it could have easily been from a Bazooka Joe strip. There's also a Milprint advertisement along the right side; I want to look into this a little more as Milprint was a Topps vendor that pioneered a lot of their foil packaging and this comic is definitely not made of the shiny stuff.