1953 Topps Baseball original paintings continue to turn up.  The latest example is an unissued portrait of Jim Suchecki in a White Sox uniform rediscovered by Friend o'the Archive Phil Erwin: 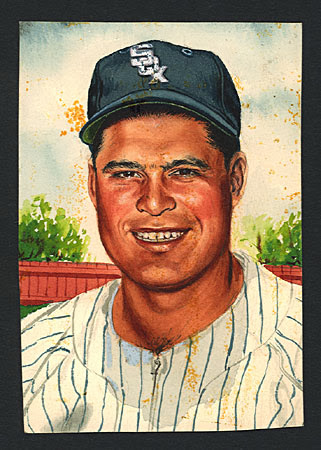 Suchecki was a fringe player who never posted a MLB win in parts of three seasons in the bigs.  He never actually pitched for the Pale Hose but they did claim him off waivers from the Pirates in May of 1952.  He was just the type of player Bowman would ignore and Topps would sign.  The above cards shows evidence of staining from glue, which seems to indicate it was actually turned into artwork for production.  This is intriguing and a nice jumping off point for some contract law analysis.

Now my understanding of how the Topps contracts worked at this time is that a player had to survive the spring training cutdown and be on the major league roster for 31 consecutive days at the commencement of the regular season in order to be paid in full.  This is one reason why the first series of cards issued in any given year had well-known players and virtually no first year subjects, since they were produced before the season started. There were a couple of exceptions to this, especially involving Yankees players (Topps had a different deal with the team and its players in the mid 50's) but a guy like Suchecki would not have been eligible in 1953 for payment if he didn't begin the year with a big league team.  Interestingly, a player who started the season in the minors but came up and was active for game 2 or later of the season and who met the 31 day rule could have a card in the set but not be compensated.

I can't turn up a key bit of information though-which is that a player had to actually be on an active major league roster to have a card.  It seems like this should have been in the terms but I am relying upon an FTC document that describes certain portions of the contracts but does not indicate their full wording.

I also cannot determine if the special terms with the Yankees were still in effect in the 60's and 70's. In 1956 for example, players who did not meet the eligibility requirements under the standard contract but who were Yankees would still be compensated if they made it to a card. I think this is why certain players like Hank Aaron, who you would think should have had a 1977 card like Mickey Mantle did in 1969 showing his full career stats, never got the "career tribute" card-they simply retired too early!  Mantle retired during Spring Training in 1969 and there was an expectation he would play until he made his announcement on March 1st. Did you know Mickey Mantle was exposed to the 1968 AL expansion draft by the Yankees (relevant article linked here)?!

Bowman had similar contractual wording, although like Topps their compensation scheme varied a bit from year to year.  The whole system was rigged to the advantage of the card companies, much like the reserve clause at the time was rigged to the benefit of the MLB teams.  I don't plan to get into the ins and outs of Topps contractual language as it's as dry as a well-done steak but certain aspects of card production directly relate to such wording.  Things were different with the NFL as the contracts were initially with the league and not the players; a situation which later reversed and resulted in numerous Topps sets not showing proper NFL team logos and uniforms.

And what of our protagonist today? Poor Jim Suchecki never made it onto a nationally issued baseball card. He came about as close as you could though, without actually being included in a set.