Well campers, I have finally added an old piece, long sought, to the permanent collection here at the Main Topps Archives Research Complex.  Those of you whose memories are less permeable than mine will certainly recall a post last year discussing a stamp version of 1949 Topps X-Ray Roundup cards.  Aunt Hannah's was a subsidiary of Baur's Bread that had a history of premium offers in what must have been an ultra-competitive marketplace for enriched white bread after World War 2. Time frame-wise, they issued the stamp premiums replicating the Topps card set of 200 subjects around 1950 I would estimate.

The stamps are found pretty easily but the album pages they were to be affixed to are a more difficult quarry. I had previously assumed these pages were made of paper but they are actually thin cardboard, about the same thickness as a 1980's Topps card.  This one has the stamps affixed and you can see they were designed to display 25 at a time: 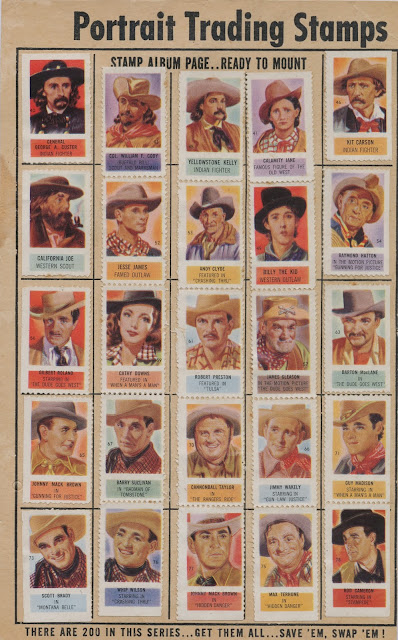 Some of the stamps are still connected to each other; sheets are known with all 25 stamps still "unburst".  I have seen the 25 stamp quadrants (they came from either a 100 or 200 stamp sheet) but don't have one of my own to show.  They look really cool as one piece though and I want to picture one so here is an example that (I think) came from Todd Riley: 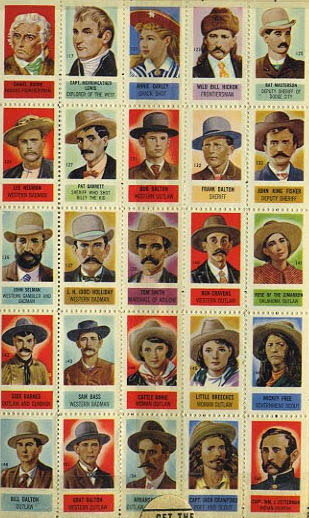 Looks like a bite was taken out of the bottom to allow a full sheet of 25 to be held in place without sticking them.  Here is the back of the page and you can see where the little half moon could be pushed out at the bottom (under "Loaf"): 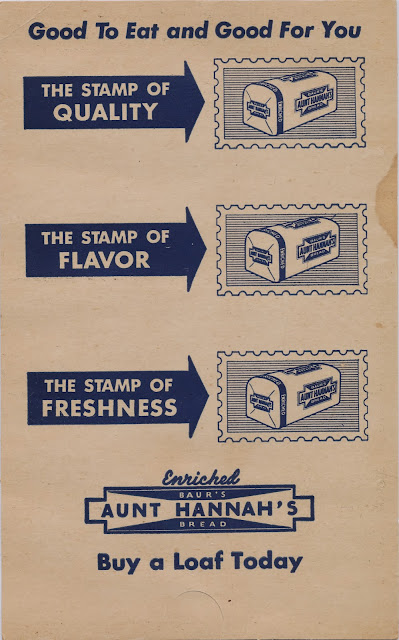 With all due respect to Aunt Hannah, "meh".  I want to focus though, on a small feature, namely two punchholes, best seen on the front in the detail:

You can see two little unpunched holes t left of rows 1 and 4, which clearly relate to an album.  I have not, as of today, been able to spy an album anywhere but intend to keep looking.  Robert Edward Auctions had a sheet of 100 stamps up for bid not too long ago: 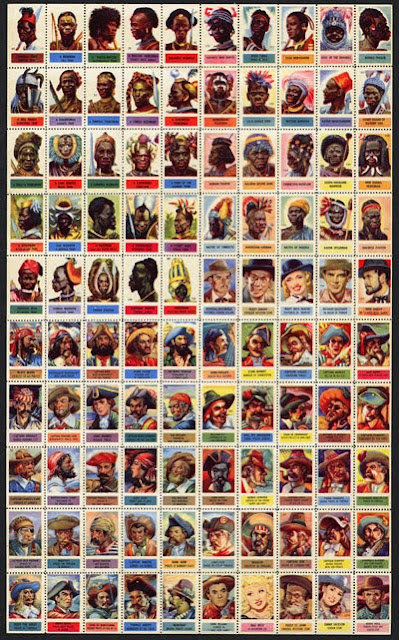 REA also had a proof block of ten, possibly cards and not stamps but still a neat item: 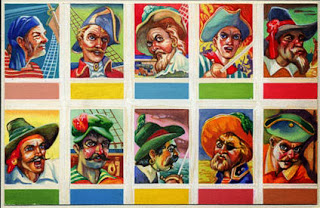 Aunt Hannah certainly had a nice "in" with Topps, didn't they?

Those are pretty sweet. Great bright color on them.