It's quite rough and it looks like a mouse got to some of the page corners but I am happy to add this little sucker to the hobby publication library I maintain here at the Topps Archives Research Complex: 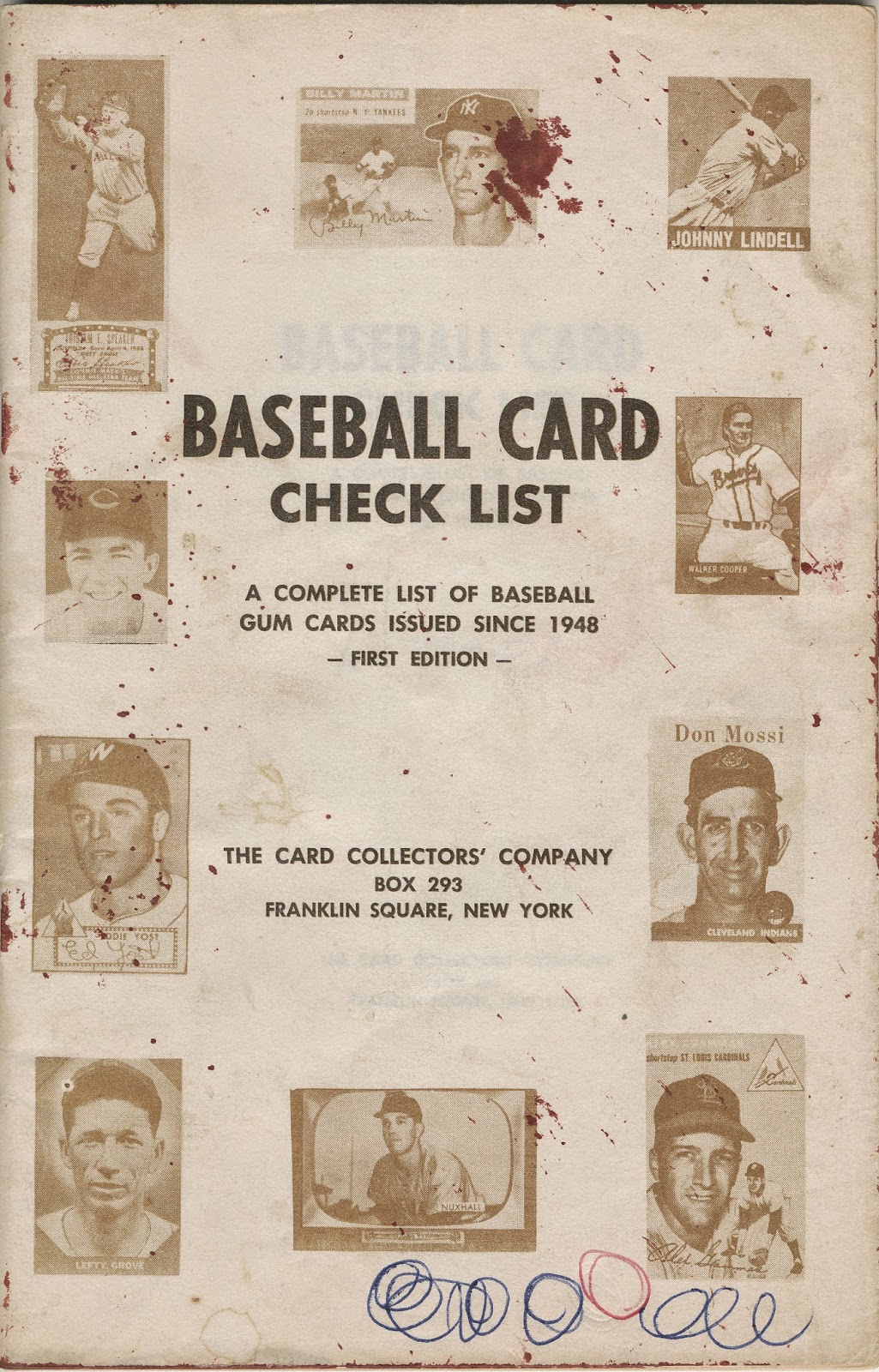 Issued in 1960 for $1.25 plus 10 cents postage, this 64 page pamphlet was bare boned but contained complete checklists for all main Topps sets through 1960, the 1955 Double Header and 1956 Baseball Buttons plus the two existing Bazooka sets.  In addition, there were complete checklists for Bowman (including the 1949 PCL issue), the 1959 and '60 Fleer issues, 1949 and '60 Leaf and the Dormand Postcard set (described as the "finest reproductions ever made of baseball players").

I like to get as close to the original source as I can when writing about various sets and while the writeups in the pamphlet are sparse, there are indeed some nuggets within:

1949 Bowman PCL - "The series is so difficult to find that most collectors will never see one....the bulk of the print run was destroyed." The reproduction of an example, front and back, was likely the first time 99.9% of the hobby had ever seen one of these.

1953 Bowman - "In order to lengthen the series to compete with the long Topps series on the market, Bowman issued an additional set of black and white cards."

1955 Bowman - "...the beautiful television design was extremely popular and remains among the most desired of all baseball sets."

1951 Topps - "In addition there were a number of larger cards of exceptional interest...another group was a Current All-Star series.  Though the cards were issued only a few years ago, it is virtually impossible to complete the set." No mention is made as to the scarcity of the three super short prints in the Current All Stars, they are listed along with the other 8 cards. All five of the intertwined sets are listed together under this generic heading.  The two Red Back variations are incorrectly ascribed to the Blue Back series.

1952 Topps - "Number 311 to 407 were issued in a much smaller quantity and as a result these numbers are exceedingly scarce."

1955 Topps - "The cartoons on the reverse side were drawn by Irwin Hasen, who draws the famous cartoon strip 'Dondi'".

1956 Topps Baseball Buttons - "These unique Buttons are getting scarcer all the time."

The CCC Check List was issued and updated through sometime in the 1970's I believe and would have been a key, early hobby resource.

I bought one of these back in 1971 when I started collecting. It came in handy when I ordered from Gar Miller and others. This was before the Sports Collectors Bible.